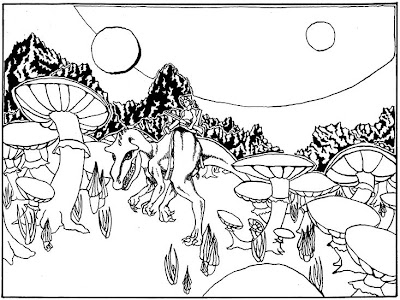 One of the very first images I processed on a computer -- I don't have any of the color prints I did back then and was very surprised to turn this up. Maybe I should give it a lick of color, just for shits and giggles. I blame this one on Stephan Tall's Mushroom Planet.
Over at Biology In Science Fiction there's been an interesting post made. Peggy and her associate Stephanie Zvan are interested in the relationship between science and science fiction and have posted a number of questions they'd like to ask both science bloggers and science fiction writers.

Here are my answers to the questions directed at SF writers.

Why are you writing science fiction in particular? What does the science add?
I write and I have a strong interest in the sciences and I've read science fiction all my life. Given this, what else can you expect from me? That ain't all to it, though. Science fiction allows us to bring the weight of real knowledge to bear on the human condition. Took me a good twenty minutes to get around to admitting that... Sounds pretentious as hell, doesn't it? But it's true. Most fiction springs from situations that are entirely human -- SF is a wonderful way to deal with the fact that humans are a singular phenomenon in a much wider universe. And the more science we've got, the more it affects the human condition.

And at the end of the day there are some speculative questions that are just plain interesting -- my most recent SF piece deals with the idea that humans aren't made for rational thought -- and that if given access to hardcore rationality they might not reach the decisions that are healthiest. That kind of "Huh, what if?" thought process is really important to me.

Most of what I write is surreal/horror/fantasy stuff -- but scientific thought informs that as well. In the fantasy novel that I'm currently working on, everything from alternative evolution to the idea of limited resources has influenced what I've written.

Science can add a lot to a lot of different kinds of fiction, not just SF. Look at Robertson Davies's portrait of a scientist studying stool samples in The Rebel Angels for a real eye-opener. Rationality itself is a drastically underutilized subject for fiction.

What is your relationship to science? Have you studied or worked in it, or do you just find it cool? Do you have a favorite field?
You're just trying to hurt my feelings with this one, aren't you?

Okay, until I was in my twenties my family assumed I'd be going into the sciences. I had a subscription to Scientific American all through elementary school. (Which was ridiculous because back then Scientific American was some kind of ritualized jargon-based pissing contest... but I did get the Dinosaur Renaissance issue when I was in the fourth grade.) I received a Bank of America scholarship for the laboratory sciences when I left high school. I entered college as a double major in Earth Sciences and Biology with an intention of doing paleontology as a grad student. Unfortunately, crazy intervened and left me to spend my early twenties as a saucer-haunted janitor.

I know enough to be able to get myself into trouble. I come off as knowing more than I actually do. I can talk to scientists -- and I can get way, way over my head. (As an aside, I thought creative writing and art classes were stocked with weirdos until I took some science classes intended for non-science students...)

While I try and keep an eye on things in general, I do have a strong bias for paleontology and evolutionary science. And if I am fortunate enough to be able to make a living with my writing and art, I'd like to stay in school and give the sciences another serious shot. I may never do real research but I do want to be able to write popular science works at some point in my life -- we need to improve the level of scientific knowledge in the general population and this is the only way I can contribute to that.

How important is it to you that the science be right? What kind of resources do you use for accuracy?
This is a question that I'd answer very differently on a case-by-case basis. In the end I owe my loyalty to the story -- but I've got a whole mess of scrapped fiction where an inability to make the science work with the fiction led me to abandon a piece.

Most science fiction is, from my limited and biased perspective, fantasy with chrome. Then comes a particular type of speculation that uses logic problems as a basis for fiction -- I, Robot, anyone? There is the use of scientific jargon as word jazz -- and this at its finest requires scientific knowledge to execute and appreciate. Think Charlie Stross or Bruce Sterling. Then there are those rare jewels, really scientific pieces of fiction. All of these require different degrees of accuracy to work as fiction.

But in the end, my feeling is the more accurate the better. Given two stories of comparable literary value I will strongly prefer one over the other if it has accurate scientific content.

I use a wide variety of resources ranging from a personal library to the internet -- and no matter what I do I'll always feel guilty for not having done more research. What's really thrilling is that scientists are frequently very generous with their time and advice -- and you can track them down on the internet. When I was working on a film script set in the Jurassic I received a great deal of advice from working paleontologists -- and it was great to see them argue with one another over such issues as whether cabeza de sauropod was a good taco filling.

Are there any specific science or science fiction blogs you would recommend to interested readers or writers?
I'd suggest looking around for blogs inside your field of interest. And if you go to my profile you'll find a bunch of the sites that I frequent. But right off the top of my head, Tetrapod Zoology is a favorite -- give me the monsters! And if you dig a good smackdown, Pharyngula smites the non-heathen hip and thigh. I don't know -- there are tons of them and more coming every day and I've had to stop looking at a bunch of sites I really approve of. So if you want my opinion, the sites I've got listed on my profile are my daily staples -- and I'm scared of getting any more.
Posted by Sean Craven at 1:59 PM

I find it really interesting that evolutionary science informs your fiction that falls more on the fantasy side of the F/SF continuum. My own feeling is that the laws of physics and basic biology would still follow rules in a "fantasy" world, even if those rules include magic, so it's just a part of good world building to keep them in mind.

I think it would be great if you decided to write popular non-fiction science. Non-scientists can bring a fresh perspective to what some might find a dull and jargon-filled subject.

(And we weren't trying to hurt your feelings, honest.)

I think natural history and the sciences are very fertile grounds for fantasy writing and I'm surprised that they aren't used more often.

I do have a children's book in mind that I'd like to tackle at some point. It would be called Thinking About Dinosaurs and it would deal with a lot of issues surrounding paleontology that I think aren't delivered to kids -- for instance, how scanty the fossil record actually is for most animals, the fact that populations and ecosystems are associated with specific geological formations, etc. Among other things, I'd like to show a few dinosaurs reconstructed in different ways with a discussion of the reasoning behind the different reconstructions. That sort of thing...