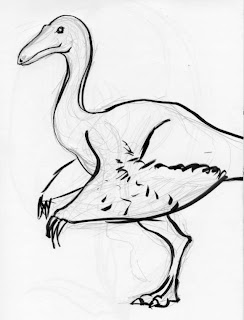 I'm still here. Sorry for the break. Here's what's been going on.

It took me nearly ten years, but I finally finished the novel for submission. Then I finished the sixth Swill.

And then I stopped.

After the first few days, it started feeling a little crummy. When I complained to those close to me -- the missus, my dad, my counselor, and so on -- they said I needed the rest. Not to worry about it.

But then a week or so ago, I found myself frightened of my emails. "Huh," I said, and took stock of myself and realized I had a fairly serious dose of clinical depression going on.

I went to my counselor, and said, "I've got the clinicals again."

She said, "But you're doing so well," and I reeled off some symptoms, and she said, "Holy smokes, those are the clinicals, all right. Time to take this seriously."

See, I've improved my self-care -- eating, sleeping, getting my way, and so on -- to the point where I'm no longer experiencing the more dramatic phases of my mental illnesses. But it turns out that not quivering with the strain of refraining from self-destruction isn't the same thing as mental health. It's not entirely different, I grant you. But something needs to give.

So. How to bust a depression.

First off, get back into the habit of activity. I did a draft of an essay yesterday and sent it to the Homework Club. First rule is that I have a draft of an essay with each of my writer's groups each week. This isn't a full-time writing load by my standards, but it'll get me a book in less than a year. And these will also be done as podcasts --- there is a chance that I'll be able to do these in video format, fingers crossed.

It's time to get back into blogging, I'm doing this blog post now, and I've got a few ideas for changing things up here. It's time to start trying to do more posts of general interest, something that might grow my audience.

This afternoon or tomorrow morning I'll steel my nerve and start answering my emails. I have begun neatening up the house and my studio -- lack of control over my environment is a symptom, yes, but it is also something that can be corrected.

Then I can start tackling the immediate projects on my plate -- lessons for a friend who wants writing instruction, short fiction for another friend who has a project in the works, marketing the novel, and putting together a portfolio so I can market an art show based on my work for Swill.

And I need to learn something, and meet new people, so I'm going to either join or start a critique and support group -- like my writer's groups -- for cartooning. I've looked, thought, and consulted, and it's time for me to get to grips with the graphic novel.

Somewhere in there, the depression will either start to lift or cease to matter. Damn, though, this one was sneaky. If my email hadn't suddenly cramped up on me I might have just gone gliding along, going deeper and deeper and never noticing until the pressure finally crushed my skull. Whee!

So next post? Something good, no more of this self-indulgent drivel.
Posted by Sean Craven at 8:41 AM No comments: