Further Bonelands Information, For The Curious 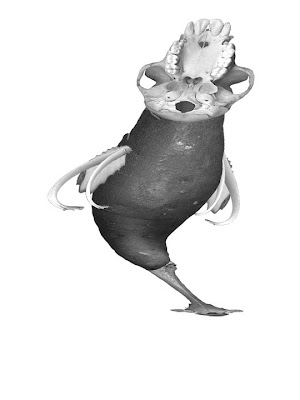 This atrocity is explained in one of the posts to which I link below. (I adore the brutality of the gratuitously unsplit infinitive.) The artist Glendon Mellow has spoken of a developmental phase in a work of art that he calls 'the uglies.' This would be an example.
So next week I'm gonna be presenting to a group of people who might actually be in a position to aid my cause -- this is the final for my Art Marketing class. Here's what I wrote for them about the series in my submission packet.

The Bonelands is a series of digital prints done in conjunction with my novel-in-progress, The Songs Of Stray Souls. Rather than illustrating passages in the story these pieces are intended to inspire settings and creatures and events. This process lets me harness my visual imagination and create without the limitations imposed by verbal thinking.

This was the first time I used photography as part of my process – prior to this, I never even took snapshots. I borrowed a digital camera and made use of the collection of bones and succulents that my spouse and I have accumulated over the years. In order to achieve the effects I desired, I had to carefully pose and light the individual elements with the finished composition in mind.

This was a breakthrough for me. I learned more about light in two weeks of taking digital photos than I had in twenty years of drawing. Although drawing does play a role here; since I make use of cropping and distortion in order to fit the elements in these pieces into a preconceived design, the process felt more like drawing with photographs than traditional collage.

Many of the pieces in The Bonelands were originally published in Swill Magazine as black-and-white pieces intended for xerography. As always, the limitations imposed by the process of reproduction proved to be sources of inspiration rather than limitation.

The use of hard black-and-white made it possible to cleanly reproduce these images at any desired size, and when I began to color them I found myself in a position to experiment wildly. From flat, muted colors to vibrant, highly saturated renderings making use of strong, almost violent contrasts in both hue and tone, the shared origin of the pieces allowed the series a unity despite the varied moods and impressions of the individual prints.

Man, I can talk a ripe old load of bullshit when needs must.

If you're interested here are some previous posts that go into the process of creating The River King in a bit more detail.