Well, I know I've written on this subject in the past, but I can't track it down anywhere. My memory is that the piece dealt specifically with my first three memories -- further reflection has increased this number to five. They would be from the ages of two through three.

Please remember that by this point, I'd been conversing at an adult level for some time. My level of thought, while not mature, was not really that of a child -- or, rather, it was that of a very strange child. Writing them down, this time, what strikes me is the sense of judgment and decision. These are the times when I made up my mind.

1.) My first memory is of a simple moment. My mother and I are walking hand-in-hand down a steeply-sloped city street. A story has a sign projecting from it, and years later I will recognize the image it bore as the 7-Up logo. Little legs, steep hill. San Francisco.

2.) I do not know for sure, but my memory of the light -- clear, mild, steely-gray -- makes me think this took place in San Francisco as well. We're in a large public space, a square paved with concrete, my mother, father, brother, and I, and I've found something. I don't know if it was a sculpture or a climbing structure, but at that age all structures are climbing structures.

So I split off on my own to go climbing, and when I'm hanging by my knees I slip and hit my head on the ground. The pain shocks me to tears, and I cry out, "Mommy! Daddy!" and they come running.

But the minute the words leave my mouth the whole situation seems ridiculous, fraudulent. I have never called my parents 'mommy' and 'daddy'; that's for babies. I call them Mom and Dad.

Why did I call them Mommy and Daddy? Because I was hurt and scared. But why call them? They can't do anything about a bumped head. It's been bumped, and there's nothing to do but wait for things to get better.

Before my parents reach me, I've promised myself never to call them Mommy and Daddy again.

3.) I am lying in my bed at night. My brother sleeps in the next bed over. Between us is a banner; on his side a lion, on mine a wooden soldier. I hated that soldier. He was not on the same side I was. I wanted the lion.

I have to pee. I'm scared to get up and walk through the dark, and the sense I have is that the dark has scared me badly for a long time. (To be honest? I still get fears in the dark, and I kind of like them.) I make the conscious decision not to get up. I pee.

And years later when I read Portrait of the Artist as a Young Man, I recognized Joyce's description of wetting the bed as one drawn from experience. Just as he said, it is warm, and then it is cold.

As the urine cooled, I realized that wetting the bed simply wasn't an option. I felt angry with myself. I felt like a fool.

I would never do it again.

4.) That took place in our house in Richmond, where we'd moved from San Francisco. It was located so as to maximize convenience for my mother's mother -- it was near her work, it was on the same block as a Christian Science church, and it was a two-story house with upstairs and downstairs apartments. We were on the top floor, my Grandma Jean on the ground floor.

Thinking about that situation now, thinking about the difficulties between my grandmother and my mother? That must have been pretty brutal for all parties...

Anyway, because of the nature of the times and the cast of characters involved, I went to Sunday School on my own. Part of me is thinking, "Hey, it was literally two doors down, and we aren't talking about a normal kid, we're talking about me." But still -- letting a three-year-old walk to church on his own does sound a little crazy to me.

The memory in this case is of a nice sunny morning. I'm dressed in my church clothes, a charcoal-gray suit with short pants held up by suspenders.

Walking through the parking lot, I am contemplating the questions I have asked -- "What do you mean, God is Love? But if we're perfect reflections of a perfect principle, then how can we be capable of mortal error?"

(Okay, maybe it wasn't crazy to send me to church on my own. Maybe it would have been crazier to have to field these questions from a three-year-old.)

Their answers were the vague, poorly-reasoned horseshit you always get when you ask those questions, and they did not satisfy me, and as I walked home it hit me that those answers would not satisfy anyone who really wanted satisfaction, and that they never would. That the people in the church did not have the answers, and going to them for information was nuts.

I was not obligated to believe them, and there was no point in trying to get them to make sense. I did not have to do that. All I had to do was give them a quarter a week until I was old enough to stop going to church.

I can't tell you the sense of relief this gave me. The horrible weight of all that God nonsense, that 'You killed Jesus' crap, just evaporated. The fallibility of adults was a source of great comfort as long as I knew I was right and they were wrong.

5.) At that same house, I saw a cousin of mine attacked by our dog. I know she reads this blog, and I'm not sure how or even if she remembers this -- she's a bit younger than I am, and she wouldn't have been much more than a toddler when it happened. I'll be a little less colorful in my expressions here, because of this.

I was with our dog on our back porch. My cousin brought out a styrofoam tray with uncooked bones on it. (I now wonder what they were doing in the kitchen.) She teased the dog with the bones, and the dog bit her face. I called for help, and adults quickly came. Reconstructive surgery was required, and the dog had to be put down.

My emotional reaction to this was a curious one. I was both angry with and worried about my cousin, I knew this meant the dog I loved was going to be killed, I thought this might mean my cousin would die. My main response was a sense of shock and resentment at the poor judgment of my cousin. It dawns on me that I was three, which would have made her two or so. And I really, honestly felt that anyone who'd do something as stupid as that deserved what happened to them. I mean, she's two. She should know better!

Now that I think about it, at three Libertarianism would have made a lot of sense to me.

Next up? One of the real elephants in the room. My sorely-missed brother, Duncan Dead.
Posted by Sean Craven at 8:56 AM No comments:

Email ThisBlogThis!Share to TwitterShare to FacebookShare to Pinterest
Labels: autobiography, Finding My Story 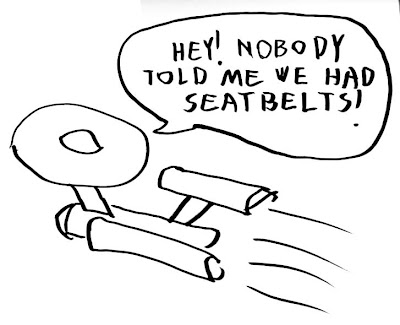 So today I let myself get sucked into this thing over on Amy's blog, and then I sent her my critical pieces on Star Wars and so on, and then this evening?

I got to finish the job. The missus and I just sat down to try watching Star Trek: The New Generation.

I like it when we have a TV show to watch. It's kind of a drag, but it's still time spent together. I'll watch some fairly dubious crap for the privilege of sharing a couch with her.

So we sat down to the first episode of Star Trek: The New Generation, and I didn't last a full ten minutes. Here's how it went, dialog slightly paraphrased:

Q: You are fighty guys and I do not like you. Get the fuck out of here.

Me: Jesus, this dialog is fucking awful.

Me: Holy shit! Fellow comrade? They paid someone for both those words at the same time?

So here you go. My critical position on Star Trek: The Next Generation.

I'm not allowed to watch it because I don't like it the right way.
Posted by Sean Craven at 8:52 PM 5 comments: