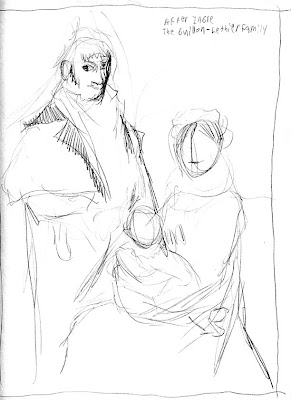 Here's how it's going to work: One sketch based on an acknowledged master drawing from Nathan Goldstein's 100 American And European Drawings...

(I'm just starting here -- if I keep this up I'll go non-Eurocentric for the next batch.) 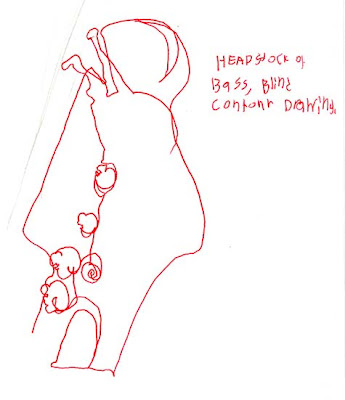 ... one observational drawing, usually done as a visual exercise (in this case it's a blind contour drawing -- I never lifted the pen from the page and I only looked at the subject while working)... 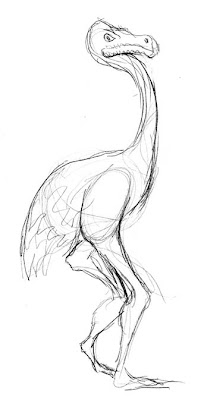 ... and one cartoon-oriented drawing done from my imagination.
So if you've ever been an art student you've probably had this experience -- a casual acquaintance catches you lugging around a big pad of newsprint and wants to take a peek. And when they see the drawing exercises you've been doing in class they immediately dismiss you -- "Oh, it's all scribble scribble."

I've heard that exact phrase a few times over the years. They never seem to catch me when I've got my portfolio -- it's always a fucking sketchbook, alas for my vast-yet-tender ego.

Maurice Lapp, the artist and teacher who taught me most of what I know about art, always said that it was important to draw from three sources: The master artists, observations of real life, and your own imagination.

So I've decided to do three fast sketches every day for at least the next one hundred days -- long enough to get through the above-mentioned portfolio. We'll see what happens after that.

When I've got my draftsmanship in shape it has a positive effect on every aspect of my creative life -- and while I'm going through a strong period so far as the creation of images goes, my drawing skills are weak at the moment.

I'm working fast for two reasons. One is that I don't want to take too much time and creative energy away from more serious projects; the other is that I draw too damned slowly and I hope to address this issue.

See, I want to do some cartooning this summer -- hopefully this will get both my draftsmanship and my speed up to the challenge. We shall see...
Posted by Sean Craven at 11:30 AM 1 comment: 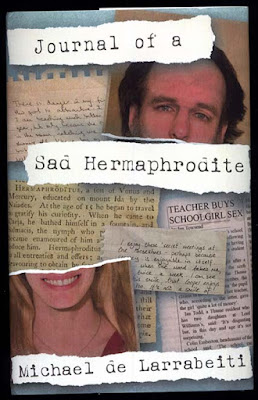 Well, I hadn't intended to post another critical piece so soon -- but when Journal Of A Sad Hermaphrodite showed up in the mail, courtesy of James Benstead of Tallis House, it demanded my attention.

I knew going in that I wasn't going to be reading another Borribles book. And honestly, there's no point in referring to the Borribles when discussing Journal. They're opposite works in just about every conceivable way, quality aside.

Journal Of A Sad Hermaphrodite is a mature work. Its prose is polished and lucid to the point of being virtually invisible. (High praise in my book.) It's about writing, about the importance of art in life, about ambition -- in other words, it's about many of the questions that are currently occupying a good deal of my attention. I found it thought-provoking, frequently beautiful, genuinely useful, technically fascinating in its approach, and at times frustrating and disappointing.

But despite that last caveat I know this is a book that I'll return to. It's a wonderful thing for a writer to read. The author clearly sees the act of writing as an essentially heroic one, and the way the book has been constructed makes a convincing emotional argument for this position. It makes me want to write more and to be more ambitious -- and to take pride in ambition.

It would be an act of hubris for an author to make that thematic statement if they seemed to be holding up their own work as an example of greatness. But this isn't the way de Larrabeiti handles things. This isn't simply a novel; it's also an anthology of great writing in both poetry and prose, all carefully selected to support the story and its deeper meanings.

If I'd heard about this in advance I'd have been very dubious. But it works -- and as a result this book is rewarding on a number of different levels. Just as a collection of writing it's wonderful. But that writing has been put to use that isn't clever -- rather, it's deep and heartfelt.

Normally I'd read a book of this length in two or three hours. This one took me all day because I read many passages slowly and repeatedly, savoring them. There's writing contained in this book that is as good as writing gets -- and it's all in service to de Larrabeiti's statement. I'm very ambivalent about appropriation and name dropping in fiction but I loved this.

I mentioned that this book is good for writers; there are passages on how to write and on the enemies of literature that I'm considering tattooing on my forearm for convenient reference.

The plot is slight; it's in service to the theme of the book and as such is serviceable -- but it is badly hampered by what I see as the book's central flaw.

The plot deals with the relationship between a teacher and a gifted student; the book is broken into three interwoven sections -- notes from the teacher, quotes from the student's diary, and selected literary passages.

I found the sections written from the student's point of view to be thin and unconvincing. She remains nameless throughout the book -- and while I suspect that de Larrabeiti did this in order to emphasize her importance as a muse or an anima figure (one of the book's strengths is its use of classic mythology, which is fully and naturally integrated into the story), it seems to be part and parcel of her existence as a plot contrivance rather than a living, breathing person.

This wouldn't matter if everyone in the novel were cut-out figures but this isn't the case at all. She's a perfect foil for the protagonist -- and nothing else, and as a result her portrayal weakens the book substantially for me.

And unfortunately this is exacerbated by trick typography. Each of the three threads in the novel has been given its own typeface. Since the quotes are in the italic version of the protagonist's font they work together perfectly; the student's passages are in a sans serif font that would work well as a display font. It makes brutal reading when used for body type. It just looks ugly on the page -- and as a result it offended the visual artist in me.

I found the typographical experiment to be a failure; it made me all too conscious of the reading experience and not in an enlightening way. On the other hand, who's to fault the decision to make an experiment? I'd rather see a failed experiment than a conventional success, and most of the experiments made in this book succeed.

Despite these petty complaints I really, really liked this book. As I said, I know it's one that I'll reread in the future. If you are interested in the relationship between art and life it's well worth a look. Few perfect books are this good -- de Larrabeiti aimed high and achieved well.

(As an aside, a description of the myth of Narcissus made me conscious of how often our culture has misread mythology. In the myth, when Narcissus fell in love with his reflection he believed it to be the face of a nymph -- he wasn't self-obsessed, he was cursed with features that inspired love. And that made me think of Oedipus, who didn't have a mother fixation -- he just happened to wander into a bad situation. Now I'm gonna have to re-examine all the familiar myths I run across...)
Posted by Sean Craven at 5:34 PM 3 comments:

Guess Who's Been Published Again? 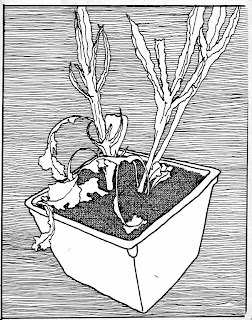 Well, it looks as if you'll be able to see my fiction making its first appearance in a genre-oriented publication. The second issue of New Voices In Fiction is out and it also features an interview with Kim Newman, of whose work I am rather fond -- I actually prefer Jack Yeovil but I'll settle for Newman.

Anyway, if you go here you can see a brief slice of the story -- it's another SF bar story, this one with a slightly uglier edge than It's The Little Things. This one concerns an attempt to devise a way for people to think rationally. It ends badly, of course. And there's also one of my author's notes, this one guaranteed to make the missus cringe, despite the qualifier the editor added to the end.

I can hardly wait to hold this in my hands. Neat!
Posted by Sean Craven at 5:16 PM 4 comments: