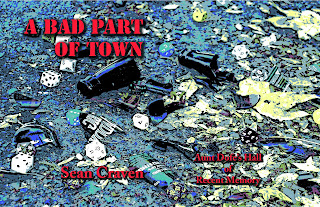 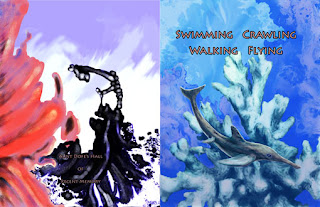 The above two images are the covers of two pamphlet-format publications. They will be used at my upcoming show this month at Aunt Dofe's Hall of Recent Memory. That's right, I'm going to be traveling to Montana, and if anyone can guide me in the direction of some Zappa-themed novelty floss, I'd be mighty grateful. And yes, A Bad Part of Town is going to have its spine to the right, and will be read back to front, and the whole show is full of that kind of crap because what the hell were you expecting from me?


Okay, folks. This may or may not be the last post for this site, but I've got a brief moment where I have the option of telling y'all what's going on.

I am, among other things, in the final stages of preparing for my first solo art show. This show will bring together my writing, my visual art, and my performance in one package, and if I can pull this off, you can expect more along those lines.

I had two conceptual issues to face in this project. The first is one that came to light in discussion with one of my oldest friends. (Those close to me have been startled by a recent burst of personal progress; it is the result of this friend going to great effort on my behalf, and I acknowledge this with much gratitude.) We were discussing the nature of art, and specifically the nature of printmaking. I'm a digital artist. Have been from the first time I held a Wacom stylus in my hand and I knew there was a way of communicating with a computer. I've been using Photoshop since it came on floppies, okay?

But now there really is no comparison between a woodblock or an etching and the object that rolls out of a printer. I argued against it at the time, but in retrospect, the idea grew in me that simply producing a print isn't enough.

I was also facing the idea that the museum, the gallery, and even the publication, for better or worse, outrank the art. They are there for the sake of the art, but they frame it, enclose it, and give the experience of art it its most essential physical qualities.

This realization depressed me, until I realized that it meant I had to take responsibility for the interaction between art and publication, or, in this case, between art and the gallery. What happens in the gallery space is the art, not the individual images on the walls. The images are offered for sale as much as memorabilia of an event as artworks in themselves. My job was not to produce images for display; my job was to take years worth of my art and writing and use them to convert the space into something unified and meaningful.

I could not engage directly with the gallery, although Dave Kirk, the owner, gave me some solid pointers on lighting. I did have the floorplan. At first, I used it simply as a means of referencing the measurements of the walls, but after poring over it blindly, I suddenly saw the essential shape of the space, the way it was divided, and the way people entering it as a gallery might move.

The four walls resolved themselves into two facing L-shapes, separated by doors. The short arms of the Ls receive west light, which is strong and varied, and seem to be the most visible from the street. So they get saturated colors, strong contrasts, skulls, monsters, and so on.

The pieces are in two parts. One is the image, and the other is a short poem functioning as a title. Most of the images are fifteen inches wide by twenty inches high; the poem/titles are on placards about nine inches by three inches. On the right side of the studio, the poems are aligned to the left of the placard, and the left edge of the placard is parallel to the left edge of the image. This unbalanced composition will lead the eye down and to the left, so that it will be natural to follow to the back door.

The pieces on the left will be leading the viewer to the right, again to the back door. With any luck, this should lead to a sort of swirl in the space, with a strong possibility that the viewer will travel in a figure-8 path.

In addition to the art on the walls, there were a number of pieces in this sequence that were best viewed as small black-and-white pieces. Rather than put them on the walls where they'd be overwhelmed by the large color pieces, I made two booklets combining writing and art in some odd ways. There will be two reading stations on site, one devoted to each booklet.

I'm really hoping that the combination of words, pictures, and interior design will push this a little further than the ordinary art show. And since I'm going to be performing at the opening, this will pretty much represent the maximum Sean the world has seen at any one time thus far.

You'll hear about it one way or another...
Posted by Sean Craven at 2:58 PM No comments: