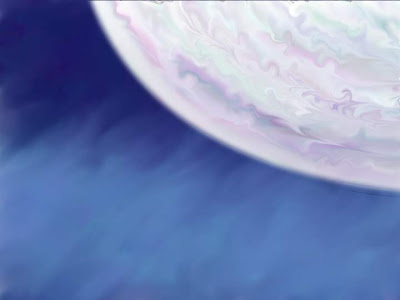 Further Painter experimentation. Well, I've managed to totally ditch the curse of the computer-generated gradient, and yes, this is going to be total van art. Maybe that should be my name -- van Art. (Someone must be using that one already...)
So a few posts back I mentioned that I was being tempted by the Taos Toolbox workshop. (Go on, click the link. Feel the temptation.) Thing is, is that I'm currently mega-broke. My financial situation is brutal and grim. No way I could afford to go. But my experiences at Viable Paradise had been so good in so many ways (in addition to what you'd expect, there was everything from a major emotional breakthrough to a new community to publication) that I wanted more.

Well, Taos Toolbox did not look like it would be the same experience as Viable Paradise. It's longer, there are fewer instructors, and it looks as though much more time would be spent actually writing. It's for people who have more writing experience, or who have been through a writer's workshop already. It looked like a good next step -- if VP opened up the hood and gave me a working description of the engine, it looked like Taos Toolbox would have me get into things with a wrench.

One evening soon after I made that post I was mooching around the house, pacing irritably and picking at the bookshelves as though they were big rectangular scabs.

"What's wrong with you?" the missus asked. Well, that's a hell of a question, but this time I had a fairly brief answer.

"I want to go and learn plotting from Walter Jon Williams," I said. "I can't freaking afford it, but you've seen me have weird luck with money before. I mean, it's not literally impossible that I could get the cash together."

She perked up a little, showed some interest. She's read her share of Williams, and she knew what I meant about plotting. "Who else is going to be teaching?"

"Nancy Kress?" (The missus is a big Nancy Kress reader. She's got some Kress in hardback, if you take my point.)

So I applied. And I got in. And the missus said, "We'll figure the money out. Go."

See the kind of gal I've got? That kind of thing is swell on so many levels -- she supports me because she believes in me and loves me. Sometimes I'm jealous of me.

So I'm going to New Mexico this summer, where I will acquire what the kids call 'mad skilz.' And it looks like I'll have to work hard if I want to avoid having a general good time.

As Firkin the Cat would say, "Stop licking your asses and attend to me." If you want to be a better writer, and if you want to establish yourself in a supportive writing community, workshops can be very useful. This I know. Right now there is still time to apply to both Viable Paradise and Taos Toolbox.

Come on, folks. I don't wanna do this by myself. Let's pack Taos Toolbox with VP vets. It'll be a blast!
Posted by Sean Craven at 9:19 AM 6 comments: 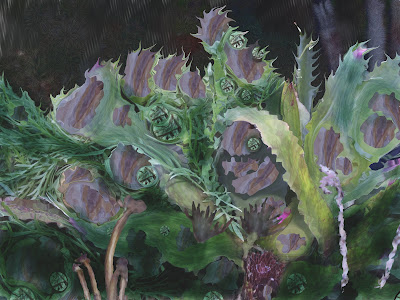 More Painter experimentation. What I love about the idea of cloning is that it lets you use photographs, etc, that have low resolution as the basis for high-resolution images.
Night before last I think I got some sleep, but that's based purely on circumstantial evidence. Last night I crashed at nine forty and fell asleep fairly quickly. Unfortunately, I woke up at one. I read for half an hour (The editorial material in James Gunn's The Road To Science Fiction, Volume 5.), then tried to sleep again.

After forty-five minutes it was obvious that I wasn't going down, so I went up to my studio so as to avoid disturbing the missus. At five, I went back to bed.

I focused on relaxing my jaws, hands, and feet. I played Bach's Sheep May Safely Graze in my mind and focused on random visual images. At first they were nothing but phosphenes, but after an hour or so they resolved into a hypnagogic vision of young girls at play.

I'd guess their ages were between four and seven, and they were dressed in brightly colored hippy-style clothes, knits and patterns. The landscape around them seemed as though it was uncultivated and richly green, but the shapes of the plants, bushes and bunch-grass, resolved themselves as a fuzzy glow.

I retained lucidity through the vision, and thought to myself that this was not the kind of thing I usually saw while going to sleep. Unfortunately, I was wrong.

After a while, the girls stopped playing. Instead, they attacked each other savagely, clawing and biting. Many of them lost their eyes, and the sight of their empty sockets weeping tears of blood is still right in my mind's eye.

Worse was the way some of them bit at each other, struggling mouth-to-mouth as they chewed out one another's teeth. I could feel it. The grit of bitten enamel, the wrenching in the gums. I can feel it now.

It seems that while I was experiencing this, I was writhing and making noises. The missus left the bed and set up camp on the couch in the living room. I regained consciousness at eight, and have been almost entirely useless all day long. I wound up watching The Host and weeping.

I believe that my brain and I are due for a trial seperation.
Posted by Sean Craven at 7:40 PM 2 comments: 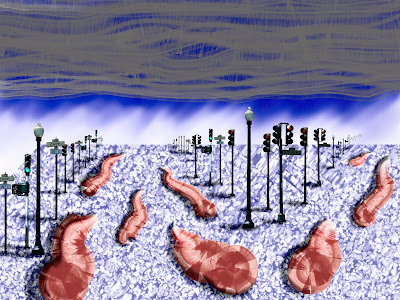 While I would prefer to put up an entertaining post accompanied by artwork every day, I ain't been doing that. Forgive me if the next few posts are lightweights as I try and get back into the routine of blogging.

This piece was done for my Painter class, using the Scatter and Pattern brushes, then modified in Photoshop.
Posted by Sean Craven at 5:02 PM No comments: