Henry Cleary and Such 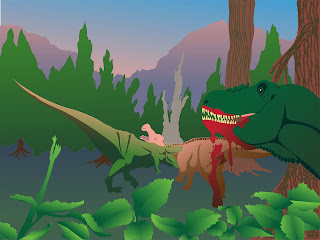 Some of my old paleo-art has gotten noticed over at Love in the Time of Chasmosaurs -- check it out!


Henry Cleary is a big, solid guy who lives out at Point Richmond sometime a few years from now. Henry thinks of himself as a sculptor working in biotechnological media, but if you break down the numbers, he's spending money on his art. Mostly, he does odd jobs.

Very odd jobs. So far he's reluctantly used gene therapy to un-pug a pug, helped a teenager whose wireless tattoo had been hijacked, and rescued a rooster who's had a few chromosomes suppressed to make it distinctly saurian.

Henry's world is the San Francisco East Bay, green and gold in the hills and urban sprawl in the flats. Henry likes to feel useful, and he has a lot of friends who are happy to oblige him. His stories are anecdotes rather than dramas. Leave your grim-and-gritty behind, and slip into a low-key good-natured bio-bohemia as comfortable as a well-worn T-shirt.

I can't really tell you any more than that right now, but things are going on with Henry. Let me put it this way. It's not just that I can't say -- it's that I don't even understand it. The whole damned world has gone insane. This could be nothing, it could be big, it could be covered in weeping sores or it could be decked out in a low-cut evening gown.

When I say the whole damned world has gone insane, I include myself, of course. Do you know what I did the other day? Of course not!

I cut a rough preliminary version of a bumper for an upcoming videocast. Since I'm torturing you with the Henry Cleary thing and some other stuff, this I can talk about.

I've decided to take the memoir pieces I've been performing for Lip Service West and do a series of video podcasts or whatever the fuck you call them. They'll be done in sets of seven, each set to be collected on DVD. The collective series is called Bone Chips. When I've mined out all productive veins of horror in my early life, the series ends, and I attempt to take all the individual pieces and rework them into a book. Cool art pal Deborah Kuchar is handling the filming, and I'm doing everything else.

So I'm working out the titles, the bumpers, the bits at the beginning and the end. And this is where everything gets screwy. I'm presenting myself to the public in a sixteen-second clip. It would be nice to say, "I"m just showing myself as I am," but. There's no such thing as that. Every time you present yourself to the public, you are making a statement about how you want to be viewed.

It's nice to think about presenting yourself in a totally unmediated way. But once you realize that you have options, the bloom is off the rose. You can't just 'be yourself' when you're writing a script or storyboarding a video.

So right now, I'm in the process of crafting a public image based on material written to define my self-image. It's like infinity, man, and it's freaking me out.

Or maybe I'm  just getting what everyone needs in this glutinous swamp of media we inhabit, the equalizer that lets us face the icons on their own home turf -- stark acoustic theme music, and a chilling glance at the camera as the last note is plucked.

Hey, the whole damned world's gone insane. I may as well have a little fun with it.
Posted by Sean Craven at 6:21 PM 1 comment: