How I Learned To Tell A Story 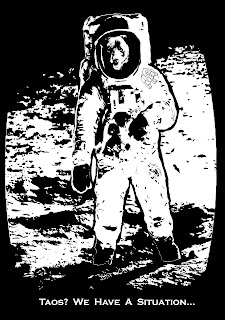 Right now the Taos Toolbox writer's workshop is actively seeking applicants. In addition to their coverage of issues specifically relating to genre fiction, they provide the finest education in the practical techniques of fiction I know of, and excellent advice and support regarding the writer's life.

But the most useful thing I took from Taos was from Walter's casual discussion of his martial arts practice. "Most of it is about maintaining a heroic stance," he said. Ever since then, I've had the heroic stance at the back of my mind. I mean, you can't say, 'I want to be heroic,' but you can take a stance.

And I can't tell you how grateful I am for the friends and colleagues I met there, and I suspect that some of us will be in communication for life. Hey, sometimes you get lucky.

I made my first attempt at writing when I was in elementary school, another in junior high, another two in high school, and three more times in colleges during my twenties. My last teacher summed it up when she said, "You've got everything but a story, and without that, you have nothing."

I responded by writing a Jim Thompson-influenced version of the Three Little Pigs. It was my first real story, and the only one I was able to pull off for another ten years.

Story is hard, story is a bitch, story breaks more wannabe-fiction writers than anything but laziness. I spent my life bouncing off the problem of story. It felt as if there was something wrong with me that was keeping some essential secret hidden from me.

This turned out to be true.

Some people say storytelling is used-up, played-out, every story has been told and what's the point? Since I'm not seeing the great storytellers addressing the issues of the day, and I see lots of people reading stories, this sounds like goony talk to me. And other people say that there is nothing without story, and I think of how non-fiction outsells fiction ten-to-one, and that sounds like goony talk as well.

But if you're a writer and you can't tell a story, it hampers you.

In my late thirties, after I got out of rehab for my back injury, I fell into a job writing cartoon scripts for Mondo Media. I was initially hired to write and direct my own show, but my weak storytelling skills screwed that up for me. But by the time my hypothetical series had died, my story editor, Megan McDonald (who is currently a rising poet), had taught me enough basic storytelling so that I was brought on to work on a number of different shows, mainly Thugs On Film. (Incidentally, this was directed by Kamau Bell. Y'all seen Kamau recently? TV show and everything.)

This was fun, and it gave me a chance to work in a format that was sufficiently limited to understand. Three and a half minutes, a movie review, one smart guy, one stupid guy, both dopes and criminals, an adventure playing off the movie, go!

Creativity thrives on rules and limitations. This is important. The greatest gift I got from scriptwriting was the habit of working almost entirely in dialog and sensory information.

I came out of that, and after reading an interview with Megan, I did as she did and joined a writer's group. This was when I started getting some traction. My fictional models were Saki, John Collier, Shirley Jackson, Roald Dahl's adult fiction, Fredric Brown, and so-on -- cruelly amusing moralistic entertainments, possibly featuring an element of the fantastic.

But while I was working on those reasonably-successful short works, I was thrashing around with my novel like it was a fucking anaconda in the mud. I read everyone from Freytag to Frey, even that old Robert McKee and Morphology of the Fairy Tale and everything, and it was all like reading poorly-translated stereo instructions. It seemed as though it ought to make sense, but I didn't get it.

So I went to the Viable Paradise writers workshop. It was swell. They more-or-less welcomed me into the human race, and it stuck. Also, Elizabeth Bear suggested that I read Writing Fiction That Sells and study joke structure.

That was very useful, but it didn't solve the real problem. The deep problem.

So I went to Taos Toolbox, mentioned above. Walter Jon Williams is, for my money, the strongest long-form plotter working today. And while much of the talk of plot was over my head, there was a specific exercise that was given to us that gave me my first real clue. I'm not going to give you the specifics of the exercise, but it involves breaking a story down into scenes and examining the way they connect to one another, the way one scene leads into the next.

We were told to use a short story or an episode of a television show. I used the short novel Clockwork, by Philip Pullman, a work whose plot shows great intricacy and craft. I spent all night on it, and when I was done, I'd installed a whole new structure in my brain.

When Walter used my novel as the example when he taught us plot-blocking, to my excitement I could understand what was going on, I could see the big shape of the work. And when I got back home, the next draft of the novel was closer than ever to working.

But there were still gaps in my storytelling skill set. And they weren't going to be addressed in a writer's workshop.

The winter after I got back from Taos, I had a minor breakdown. The nausea that had given me trouble at Taos continued, and got worse. I ripped a hole in my stomach through persistent vomiting, was hospitalized, told it was a stress reaction, was sent to a mental health clinic, was given bad pills, was dropped from the system to go cold turkey. Whew.

Still struggling with the novel, I signed up for a class with Nick Mamatas. He found the perfect question to ask me -- "Who is the protagonist telling the story to?" It busted everything, and the final draft came within months.

The missus found me a counselor, and I started to get serious about my memoir work. While researching the conditions with which I had been diagnosed, I ran across the statement that post-traumatic stress syndrome causes a disorganized personal story. I mentioned this in one of my memoir pieces, and a reader said, "Well, that's just what this reads like. It reads like a disorganized personal story."

And a big light went on.

In counseling, I was told -- to my great shock and surprise -- that I was motivated by principle rather than desire. I asked the missus, my dad, my friends, and they confirmed this appallingly vast and alienating statement.

Desire and need are central to almost all theories of story. No wonder they didn't make any sense to me.

So my personal confusion and lack of motivation were at the heart of my difficulties with storytelling. Once I had located the problems, I could figure out a means of addressing them.

In the case of my PTSD, once I recognized the nature of the problem, the real issue rose up. I was not just writing down my experiences. I was transforming them into a unified personal story of the sort that a healthy person has. The sense of shattering, of confusion, of multiple viewpoints being brought to bear on every situation -- it's always Rashomon for me -- had to be eliminated in favor of something that could be understood. One singular perspective. My perspective.

And as for motivation, the need-and-greed that acts as the engine in most stories? I use it when it rises naturally from my stories, but I don't regard it as a basic force in my narratives.

This is my current personal theory of story. It may not work for you; it's doing fine for me.

A story consists of a beginning and an end, which share a meaningful relationship, connected by an unbroken chain of consequence.

That's it. But it took me years and years of study, thousands of dollars of expense, a trip to the mountain, and buckets of blood for me to get to the point where that sentence makes enough sense to be useful to me. The simple sentence above represents a solid object in my mind, a spinal column of gleaming black metal. The spine of a story. Each vertebra a scene. All the other advice on storytelling I've read becomes useful inside the context of this concept.

Really understanding the obvious is hard. You can quote me on that.
Posted by Sean Craven at 8:43 AM No comments: