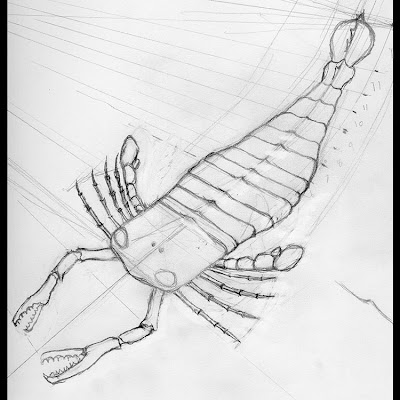 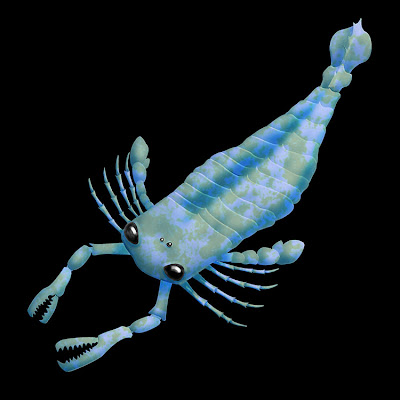 This is Pterygotus buffaloensis. They found parts of one this year that suggest the specimen in question was about nine feet long. That's too damn big for an arthropod -- and that's just the biggest fossil they've found. God only knows what the real monsters were like. I regret the fact that long after I completed this I found a photograph of the fossilized claws of one specimen look much cooler than the ones I drew -- they were just coated with nice grabby spikes. And thanks to my crappy file management I don't have a version I can correct. Ah me and oh my.

Well, I had my first session in the print lab at school last Wednesday morning and this was the first large-scale print of my work. The print is twenty inches by a bit over twenty-one inches and I've got to say that seeing it was a real moment for me.

The image was rendered using a combination of Illustrator and Photoshop. After making the initial sketch I drew the shapes and laid down a basic field of color in Illustrator, then rendered them fully in Photoshop.

This is a bit of a dry run for one of the art shows that I'm developing -- or rather, now that I've gotten a tiny bit of information on art shows, two shows.

Both shows are going to be based on the idea of producing life-size images of extinct animals for display in a gallery environment. The first show will feature orthogonal images -- either side or back views -- of animals that are small enough to be shown in full on a print that I can fit into my storage drawer in the lab. The sizes of these prints will vary in order to accomodate the size of the animal in a pleasant composition. Right now I'm planning on doing the rendering entirely in Illustrator -- I want to own that program the way I own Photoshop.

The next show will feature parts of larger animals that I'll fit into a standard size, probably somewhere around two by three feet. Again, they'll be rendered at life size. We might see the feet of a big theropod or sauropod, the head of a hadrosaur, a section of a Dimetrodon's sail, etc, etc.

Of course this isn't the first thing I'm going to be working on so far as art shows go -- further information tomorrow.
Posted by Sean Craven at 1:40 PM

Beautiful blue mottling on its shell! Thanks for the link, Sean!

After I posted my response to your comment I went to your site and took a look around and was quite impressed.

While I stand by my position on the state of the fine arts I found myself wishing that I'd phrased things more diplomatically when I saw your work -- you're obviously someone who knows what they're talking about and are much further down the fine arts path than I am.

And thanks for noticing the color -- I had a blast doing it. Photoshop layers and modes have become real friends of mine and it's exciting to be able to reproduce that kind of work at display sizes. I'm back in the print lab this afternoon!

I don't care if there are sea scorpians with "cooler" claws out there. This one is pretty darn sweet too!

I really like the attention to detail in making the tail arched. The 3D calculations are way beyond my brain the size of a peanut!

Glad you like the picture; I wish I could get it printed at life-size. Maybe someday...

Listen listen listen. Just between you and me, all you coelurasaurs have feathers, right? I mean, not to be racist about it but still. And there are these rumors about feathered tyrannosaurs but nobody says where the feathers are. I thought the arms were likely. Maybe that's why you're wearing the shirt... but maybe not. You've got some mysterioso going on.

Where are your feathers, anyway?

No worries abut diplomacy, my good man - I'll take my lumps after being arrogant enough trying to condense the worth of the fine art world into a blog comment. :-)

This weekend, I'll email you the links and some info about the sci-art listserv. After checking out your blog, I think it might be right up your alley.

Oh, and I think Traumador is kinda metrosexual and shaves his feathers off. That's what I assume. It would also explain why he wears hoodies with no pants.