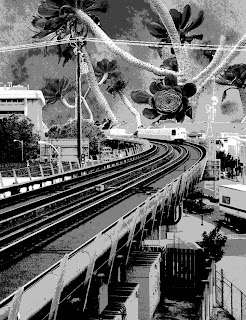 And this is the last of the illustrations for Swill. I'll be done with the damned thing tonight or tomorrow. I think this is distinctly better-looking than last issue. My experiments with the art bore mixed results -- only two of the pieces, including the cover, are in vector format. It was the size of my computer that was the issue. I could have done it with more RAM. Detailed art got strange when Illustrator autotraced it, and that could have been addressed by using a higher level of resolution and blah blah blah. I'm bushed.

It was cool. I'd finished all the other pieces, and I just told the missus, "I'm heading out to get a composition. I won't be back without it." For some reason, I was convinced that I'd find my shot at the West Oakland BART station. I went there and started looking around, nothing, nothing, nothing, and bam. Problem solved. I saw how the tracks went, the way the energy just sucked right to that one spot in the picture, and I knew how everything went together. After that it was just labor.

I cannot believe how hard it's been to get this job done. Part of it has been the nature of the last stretch of time -- between the last issue and this one my life has been a non-stop fucking drama. The ulcer, the crazy, the hospitals and pills and all that happy crap, the upward rebound... and on top of that, I've written and revised a novel, and, again, blah blah blah. If you read the blog, you know the score. My health and finances are appalling, and everything else is gold.

The real source of the blockage I've been experiencing has been a combination of over-ripe projects finally coming due, a feeling that this is a major turning point in my life, and a lack of engagement with the world. I had to stop attending school due to my financial situation, and listen.

As someone who's disabled and conventionally unemployable, from time to time, I run across people who are jealous of me. People whose idea of a wonderful life is to be divested of their responsibilities. The worst? Family guys. Fathers. They view the idea of settling in on the couch in front of the TV to be absolutely entrancing.

My life would kill them.

Inactivity is a killer. It kills people. Makes them stop breathing, is what I mean.

I have chronic pain, PTSD, OCD, fetal alcohol syndrome, and mixed-state bipolar syndrome. And I'm certain that I could get myself a prescription for something that would make TV bearable, especially if I drank as well.

I want to have people who expect things from me, and from whom I can expect things. I want contact. I want deadlines and paychecks and a sense that my efforts are having an effect on the world.

I sit in my room and I work. I need that solitude. But connection is the payoff.

The novel is going out into the world. I'll be looking for galleries for the Swill show. Swill itself is due for a boost. The performance work is gathering momentum.

It's just a matter of holding on and staying functional during this in-between time. Staying on the clock and off the couch.