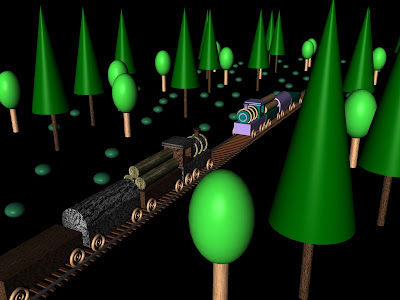 Here's my first attempt at working in 3D. Got a long ways to go... but I can see how this will be useful. It's a totally alien way of working for me -- much more like modeling than like drawing -- but I'm having fun. 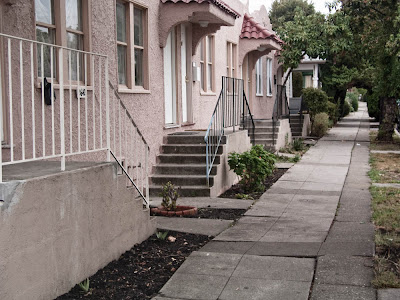 Photography continues to be a blast. Here's a glimpse of my neighborhood. 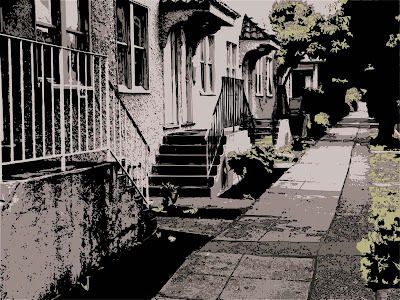 As I keep saying, even though I never do anything about it, I want to do comics. Here's an attempt to render the same scene comic-style, with a dose of extra noir to give it that cozy homicide central feeling.
So, it's been a while since I've posted. I've had a few things going on -- mostly school, sleep, and panic. That's right, I've been sleeping and it has been grand. Got eighteen hours in last Wednesday and have been doing fairly well ever since. Still have my two-thirty wake up (I can remember when I could sleep until three-thirty. Those were the days.), but I've been able to lay in bed and eventually drift off again. Now instead of feeling as though I'm living in a horrible dream that's about to turn into a nightmare, I feel as though I'm living in a cozy, almost bearable dream. Of course this will all come to a screaming halt any minute now, but hey.

School is interesting. Photography is really growing on me -- my previous visual training is coming out in my work in surprising ways. 3D is very different. Drawing it ain't and the class is very competitive with some real dynamos turning out impressive work. I believe those boys want to work at Pixar. But I'm holding my own.

As for panic. In a little over a week, I'm getting on board a plane to Massachusetts, where I'll be attending Viable Paradise. I feel utterly unprepared. My goals were compromised by my need to do well in school, so I'm going in fairly unprepared. I've decided to try and keep my focus on the novel, and use the time to try and get a good feel for how the whole thing fits together and where I need to make any last big-picture adjustments while I'm going through my final pre-submission line edits. While working on that, I'll grill everyone I can on how one sells one's first novel. And of course, I'll be doing what I'm told.

In other words, I'm totally unprepared and am expecting to be batted around like a tennis ball. Life as usual.

Speaking of Viable Paradise, last Saturday I got the chance to meet fellow attendees Chris Cornell, Chia Evers, and Chia's old man Dan. Interesting to see that all of us have an interest in a variety of arts -- I think this is a lot more common than people would think. I suspect a majority of creative types spread themselves over a few different fields. Gonna have to see if I can coax Chris over to play a little music some time.

Good people, and they made me feel a lot more comfortable about going to VP.

Turns out that Chia and Dan are, among other things, experimental performers. This isn't a field where I have any knowledge outside of what I read in ReSearch books, back in the day, so I was interested when Chia and Dan suggested attending a performance at a festival they were attending in San Francisco.

I was genuinely surprised at how much I enjoyed it. One thing that helped a lot was that underneath the dance and puppetry and homemade props and mime and lighting tricks and so on and so forth, there was a young love story that everyone in the audience knew from genetic memory. Having that kind of undefeatable narrative to work with gave the performers a great deal of freedom for experimentation while remaining clearly comprehensible. And just between you and me, I got a suspicion that the love story the two performers enacted may well have been their own.

This was followed by beers and an al Pastor burrito, so there wasn't a hell of a lot to complain about. Nice afternoon, nice company -- who's gonna argue?