Done For Now, As Usual 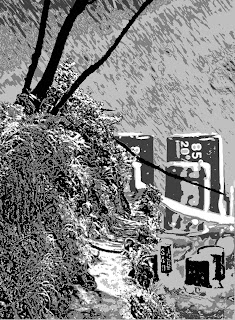 Gonna let this sit overnight and print it up before I make up my mind, but this is pretty close to done. That's two days in a row where I've eaten properly, worked on the novel, and worked on art. This is how I should be.
Posted by Sean Craven at 4:52 PM No comments:

The Wet Season Is Here 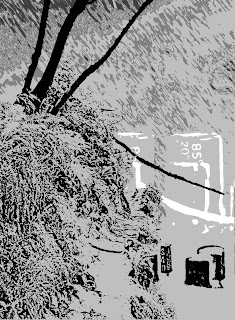 I'm nowhere near done, but part of me wants to say this is good enough... The fun here is that so much of the final look is up to chance.
Posted by Sean Craven at 3:42 PM No comments: 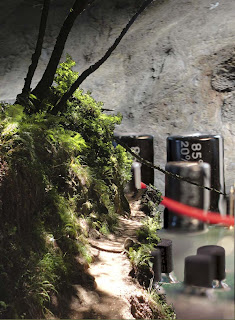 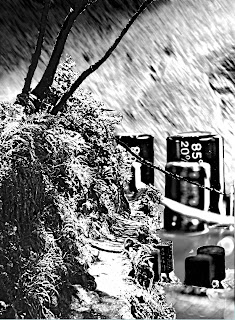 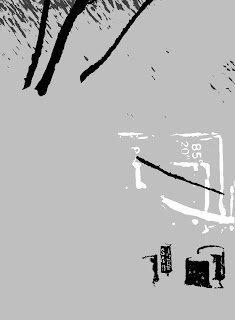 This piece had its origin last week when my dad and I were hiking in Muir Woods. Early on he pointed out a redwood burl to me; that's the far background, to be a rainy sky in the finished piece. Then when we reached the turnaround point, we went back down the path a ways and I snapped a photo of it. I pointed at the view and said, "I'll trim off the whole right side and put in a closeup of some circuit board and make it look like an industrial landscape." "Cool!" he said, and here we are, design finished and rendering started.

I love the way this process feels both like painting and printmaking -- working in light and shadow from a neutral background is a totally different thought process than line drawing, which is my most natural headspace, while rendering in flat shapes of five different tones is the kind of graphic limitation that makes for pleasing problems and solutions. Honestly, the main reason I had such a hard time getting into this project is that it's close to pure pleasure.

Got Cream, Dylan, the Jackson 5, Aretha Franklin, and Van Morrison on shuffle play -- very atypical mix for my tastes, but it suits the mood and light of the cloudy afternoon. I wanted to hear Tales of Brave Ulysses, and it came up first! According to the principles of shufflemancy (one of my minor occult disciplines), that's a very propitious omen.


Okay, I'd like to present the story of my father and I as a tale both cautionary and hopeful. Dads! You probably suck. Let's be honest; there is at least a slight majority of people in this country who hiss the word 'father' under their breath at the stubbing of a toe or the untimely sighting of a meter attendant. I'm not saying there are no good fathers. I know at least three of the poor bastards off the top of my head, and watching them being eaten a bite at a time scares the piss out of me.

In case you haven't noticed, my view of family relations is a bit fraught. I had a hard time with my folks growing up. My dad and I didn't have many problems, but the ones we had were whoppers. And now the poor bastard has to deal with my working on memoirs that are already starting to get an audience, even some press. He's gonna get an honest representation -- he thought my treatment of my mom has been forgiving, so there is hope of slack. Frankly, I'd just as soon he never reads or views this material. There's stuff he doesn't remember. He doesn't need to.

While I am still actively wrestling with my childhood, my dad and I now have a great relationship. We're among each other's closest friends, and every week we go for a hike and a hamburger. We can talk for hours, we can walk in comfortable silence, and we do plenty of both.

Much of our essential temperaments are identical, and it is not at all unusual for us to gesture or grunt in exactly the same way at exactly the same moment. We've been mistaken for brothers; that semi-irked me until I realized that I'm pretty young-looking myself, and now it gives me hope for the future.

The time we spend in nature has become one of the most important emotional supports in my life, and this gift of the living world is one he gave me in childhood. We camped every year, and when we did spend time together, it was usually fishing. When I was in the first grade, he took my brother and I, along with a friend of his and his friend's kid, on a hiking trip in the Trinity Alps. We got stuck in a cave in the rain for quite a while, but I loved it and still carry vivid images of it in my mind.

He and my mom always made a point of getting us a peek behind the scenes at zoos and museums. The memory of us sneaking in to hang out with Shamu, the orca, and how hard it was not to pet him -- he fucking was begging for contact, poor son of a bitch.

During my childhood, my dad was a postal worker. He's one of the founders of the letter carrier's union; I helped assemble picket signs as a kid -- even then, I felt good about contributing to the movement. He's still politically active -- too smart to hope, too stubborn to stop, still gathering in those minor victories. People like him keep the fucking system from turning into a straight-up toilet.

He's a reader. Our house was filled with books, top to bottom, filled with art and music. He's a writer himself, and the love of words came to me in the atmosphere.

The conversation -- one of the great gifts I've been given is that of oral culture. I grew up in a sea of lawyers, artists, cranks, veterans, and all the mailmen, which is what we called letter carriers back then. I grew up in a stew where every ingredient was one of a kind, where there was no such thing as normal, where nobody was in the majority. And I got to listen and take it all in, all the voices, all the words. It was a writer's feast. I can talk country, court, or laboratory, and I learned it all at home.

When I look at my dad, I connect him with the good memories. I don't look at him and think of the bad times. So far as I'm concerned, he said he was sorry, he demonstrated sincere contrition, and he's been a steady positive presence in my life since he placed himself back in it. What I've been through hasn't been a conscious decision; he showed he cared, I knew he meant it, and that settled things so far as I'm concerned. The memories we've shared as adults are more significant to me than any sorrows in the past.

There's such thing as a second chance, if you're willing to make it. Take it from me. It's not too late to get off the hook. Try being a decent human being.