R2D2 - Sex Dwarf of the Spaceways 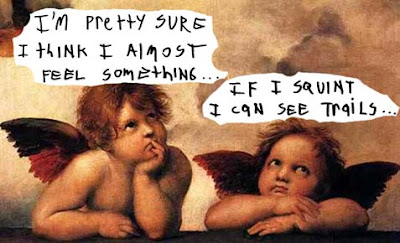 So I've been talking about watching Star Wars in another language, to see if the experience changed if I didn't cringe every time someone opened their fucking mouths. (Say what you will about Star Wars, George Lucas has an ear for dialog that is infallibly leaden.) So I put on the DVD, clicked French for the language, and No Subtitles, then followed it up with The Empire Strikes back. The result was a bit of a shock.

First off, it became totally obvious that droids are slaves. Boom, that simple, and all of a sudden Star Wars got nine kinds of ugly on me. That scene where the Jawas are selling the droids to Luke's uncle was actually a little chilling -- Luke simply has no idea that he's doing anything wrong, and neither does Lucas. I've been watching the damned movie since it came out and it had never struck me before. Luke is Mister fucking Charlie. Holy shit.

So R2D2 is a slave. Well, it gets worse. You know how he beeps and boops instead of talking? They did that on purpose. I mean, it's not like they'd have to get R2 any new hardware. If he can run a mind and he's got a speaker, he's an app away from speaking directly. It probably wouldn't even cost anything; it's probably available as freeware.

This is the equivalent of cutting out a slave's tongue.

And then there came the moment when R2D2 interfaces with the Death Star's central computer, and it dawned on me that the R2 unit had a unit. He was fucking the Death Star, which is actually much cooler than blowing it up.

But I can hear you saying, "Sean, you're reading too much into it. Just because R2D2 springs a stiff rod from the center of his body and thrusts it into a hole is no reason to go laying some weird sexual interpretation on things."

To which I can only say; in The Empire Strikes Back, they have a right hole/wrong hole joke.

The whole thing was like that. It was appalling. And the attitude of vague contempt for the droids... I mean, R2 is a wonderful little fellow, but whatever would he do with himself if he didn't have an owner?

That wasn't the worst, though. I spent way too much time thinking about Yoda's hair. Study the scalp of the wise one -- at one point in his life, he had total Larry hair. I'm picturing him in his salad days -- poor bastard probably started going bald in his twenties -- cruising around, trying to pick up girls with his little green stooge head.

Why the hell do I do this stuff to myself?
Posted by Sean Craven at 9:32 AM 7 comments: