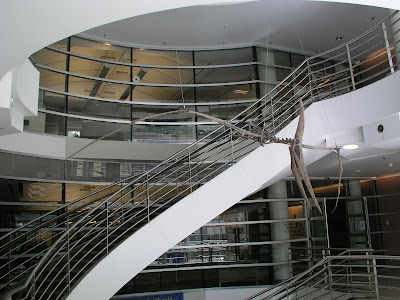 So just like everyone else in the civilized world, I've been worried about my upcoming submission to the Pterosaur gallery at Art Evolved. 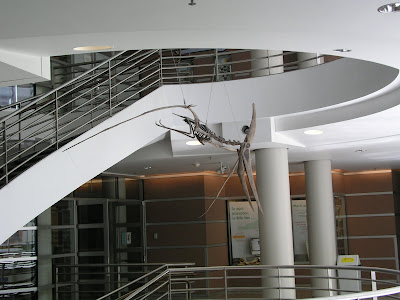 I've been doing some sketches. You don't want to see them -- they're horrible. I figured I was sunk, but then I remembered that there's a mounted Pteranodon longiceps within walking distance of my house. So I went out and took some reference photos. 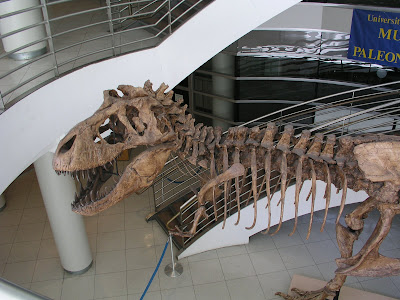 Best of all, it's right over a Tyrannosaur mount. Who's a good girl? Now who's a good girl?
So here's the cover letter for my submission to Viable Paradise. Man, I hope I get in...

I’m writing to apply to the Viable Paradise writer’s workshop. My real writing experience began when I fell backwards into a job writing cartoons for the Internet, a lovely career ended by the dotcom crash. I worked for Mondo Media. I sold them an unproduced show and did a bunch of pick-up work but most of what I wrote was for Thugs On Film, which was picked up by the BBC and developed a cult following in Britain.

On the advice of my editor I joined a writer’s group when I began working on fiction, and have been engaging in weekly critique sessions ever since. For the last few years I’ve been working on a novel and publishing short fiction in the small press. I’ve collected some rejection slips from mainstream publications, and Dave Byron of New Voices In Fiction has requested and accepted two of my stories, one of which will be appearing in an upcoming anthology alongside Joe R. Lansdale. I’m also the assistant editor and art director for the small press magazine Swill.

I want to attend Viable Paradise for any number of reasons. Many of them are obvious – developing skills, making contacts, the adventure of it all – but I have a couple of more personal motivations.

The writers I work with aren’t as interested in genre as I am. This has shaped my fiction. I think the influence has been for the better, but I would love the chance to work with people who appreciate the kinds of stories that have been my main inspiration. I can’t even imagine what it would be like to refer to, say, Jack Vance and be understood – but I bet it would be a swell experience.

In addition, I’m currently going through a strange period in my life. I’m beginning to come into my own as an artist – I feel as if I’m on the verge of professionalism both in writing and the visual arts. Or, to be a little bit more honest, I’m feeling like less and less of a fraud. Not to go all therapy talk on you, but I think an experience like Viable Paradise could help me to redefine myself.

Man, I hope that doesn’t sound too dorky.

Just in case you'd forgotten that I'm a total bastard, I have to say that the last day or so has been quite bracing. My sympathies to the departed and their loved ones, but as a member of the public that's had their names, faces, and petty contretemps stuffed down my throat for what seems like my entire life, the deaths of Ed McMahon (Why do I even know who he is?), Farrah Fawcett (One of the least sexy sex-bombs ever, never showed any signs of being anything but livestock.), and Michael Jackson (Along with Madonna, he was the one who made me stop listening to the radio back in the eighties. Interesting that the word 'pedophilia' seems to have vanished now that he's croaked. Admittedly a tragic figure -- the poster child for celebrity-as-veal.) are, for me if not for them, a blessed release. May all celebrities go that way but pronto.
Posted by Sean Craven at 4:26 PM 2 comments:

A Brief Failure Of Suction, I Hint Mysteriously, and A Bit Of Gas And Grandma 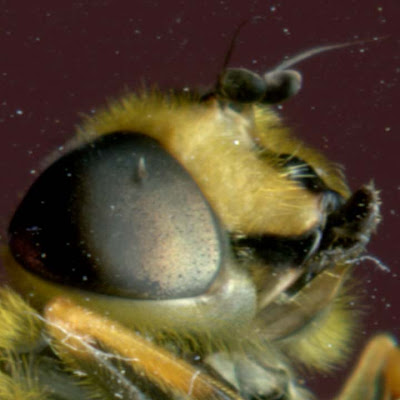 Did I tell you how much fun I'm having with the new scanner?
Of course it took me longer than I thought it would, but my submission for the Viable Paradise workshop is ready to mail. Two short stories and a cover letter. Well under the word-count limit, professionally formatted, should be received well before the deadline, etc, etc. I think I've managed to avoid shooting myself in the foot on this one.

If I don't get in, at least I made the attempt and had the experience of applying properly. And if I get in, I'll be spending a week around the guy who buys books for Tor, along with a very respectable selection of SF/Fantasy writers.

And I've recently been given the chance to sell out to a small degree for a small fee and I've decided to run with it and see what happens. If I'm allowed to, I'll fill you in sometime soon.

Anyway, in the process of revising the stories I'm submitting I wound up cutting a scene that I really liked. Hey, a lot of my readers liked it too. So in the interest of letting nothing go to waste, here it is...

***
The previous Sunday Grandma decided to take me to the city, down the highway that cut through the salt marshes. There was a white hill of salt on the horizon and all the cars had their headlights on.

“I hope you stay,” I said. “I don’t want you to go. But that’s me being selfish. Honestly, if I were in your shoes I wouldn’t think about it for a minute. Just imagine what kind of wildlife they’ve got out there, what it’s like to see things from space…”

I nodded. “Uh, huh.” I felt something shift inside and opened my window for safety’s sake. There was a moment of silence.

“You know, you’re right,” Grandma said. “This isn’t the kind of opportunity you can turn down.” She turned to me, smiling. “I’ll go and you’ll be fine, won’t you?”

“Good,” Grandma said. “That’s good.” The next few miles went by in silence. “So Amy sent you another letter.”

“Yeah,” I said and discreetly emitted a little gas from Saturday’s drinking binge. “I can’t believe what she wrote. She said ‘I know I’m causing you great pain but I don’t think it would be appropriate for me to change my behavior in order to accommodate your needs.’” I could see the sentence laid out in the beautiful little calligraphic loops of Amy’s handwriting. My throat hurt. “I mean, isn’t that what decency is? Not deliberately hurting people? And she’s upset because I don’t appreciate the tender romance she’s picked up since she left to go to school and then she asks me to write her more often. I thought we were going to be forever. I’m like a bug on a pin. God, I’m an idiot.”

There was no way I could explain beer farts to her. I couldn’t even say the words in her presence.

After a few moments Grandma broke the silence. “This isn’t the end of the world, you know.”

“Listen,” she said in a tone of flat anger that I’d never heard before. “When I was your age I fell in love with a young man. He was a pilot and that was when pilots were something new, when they were heroes.” I could hear her voice warming at the memory. “He had a mustache and he was… Oh. I loved him so much and when the war came he went to England to volunteer in the RAF. That’s when my hair went white. When I heard that he’d died. And after that I let your grandfather marry me.”

“That’s what life is like,” Grandma said. “Everything good goes away and you feel sad and angry and it never, ever stops. All you can do is try and be nice. That’s all there is.”

I felt a sensation of pressure. The world was constricting around me like shrink wrap around a box, airtight and closing in. Squirming in my seat I looked out at the salt flats, the rushes emerging from the brown water in bunches, the red-winged blackbirds and ducks and egrets. I stifled in the brimstone stink that filled the car. Grandma wasn’t supposed to be like me.

She thought God was love.
Posted by Sean Craven at 7:48 AM 4 comments: 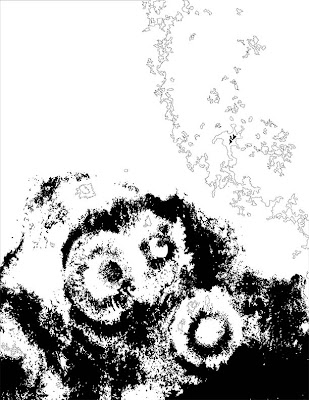 I'm taking today off as a pure maintenance day. I'm going to be busy, but it'll be dealing with support and preparation issues. Right now everything in life seems to have ganged up on me. When that happens life wins and I lose, so it's time to break off some smaller problems and tackle them one at a time.

My main concerns are as follows; I need to finish the illustrations for Swill, I need to get two short stories off to Viable Paradise by the end of the month, and I need to have a Pterosaur illustration done by the first.

But right now my studio has become such a hideous sty that there is no way for me to function properly. The manuscripts of the short stories are mixed up with all the other manuscripts scattered everywhere, there are bottles all over the place, drifts of books and magazines cover the floor...

Go to the glass store and order the glass for the scanner. Then I'll be able to add metal and stone to the list of scannable items and I can stop worrying about scratching my scanner bed.

Gather and organize all loose manuscripts.

Sort and stack all books and magazines. Recycle all bottles. Start stuffing trash into a bag.

Then if there's time this afternoon, redo the piece I initially intended to be the centerfold as a one-page image. It ain't gonna be a centerfold; it's gotta be a diptych, which necessitates a denser sort of composition. That's fine; the image will work well for my Tribulator piece.

Tomorrow? Finish the stories and get 'em in the mail by Wednesday.

Oh, and in another bit of good news, I now have two very nice suits. "You just don't get it," the missus said, "those suits are worth more than a thousand each." These are not plainclothes cop suits -- these are Very Nice Indeed. The word elegant has been used.

They cost me two bucks -- and the previous owner was thrilled to pass them on to someone who could use them. Thank you, Yard Sale Guy. Now if I hadn't forgotten that calf-length camel-hair coat he had for me...
Posted by Sean Craven at 8:50 AM No comments: