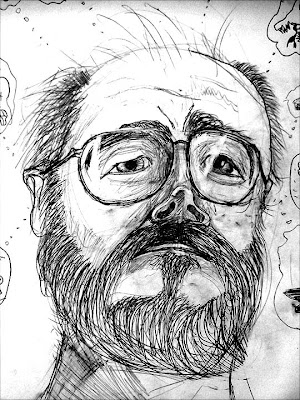 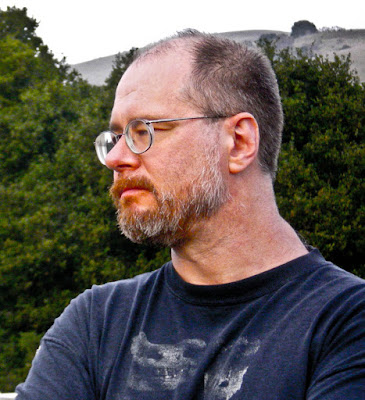 ... to this, in less than two years. How did I do it? With expert assistance.
I've been trying to figure out what I'm for and how to make me work for a long, long time now, and over the last while I've finally started making some serious headway.

I recently ran into our old vet while yardsaling. After filling me in on his current unpleasant physical state -- he is not an enthusiast of aging -- he asked me what had been going on with my art and writing.

After I laid out a fistful of the ridiculous affirmations the world's given me over the last year or so, he put his hands on my shoulders and pulled me down so our faces were inches apart. He grinned. "So it turns out you're worth a shit after all."

That felt good. Nothing like an affirmation from an elder. I love 'em, and seeking them has brought me good. But while it may take a while for my habits to wear off, I'm done seeking affirmation for my art. I've had enough of the high-end stuff to know that I like it, and it helps, but you know what? It's time to stop asking for it.

I've mentioned that I'm taking a class in commercial fiction that Nick Mamatas is teaching? I signed up for it because I wanted to be told whether or not the novel was ready, and I sincerely hoped it would be very well received. Well, last Tuesday night, we went over the first chapter of the current draft of the novel.

I ain't telling stories out of school, but if you get a chance to take a class with Nick, do so. He's a Rinzai type -- if you're not a Zen buff, Rinzai was the Zen master who founded the hard school of Zen, where enlightenment was frequently inspired by a sharp blow to the head. I just grinned, talked slow, and took it. I know when that's the thing to do.

Essentially, he made me realize that I am not a commercial fiction writer, and that trying to make my work commercial was not helping things. That the characteristics that would make this book appeal to its natural audience are the very ones that I'm stifling in order to make it fit into the genre format.

I feel as though I've been given the book back. More then that, I feel no more real need for outside approval on it. I can see clearly that while the time I've spent with my creative energies focused on pleasing readers has been well-spent, it's time to cut it out and write the book I want to write and fuck everything else. I have been writing down, I have been making decisions I dislike for what are ultimately commercial reasons.

I can't let commercial decisions have any serious role in my work if it is to function properly. The next draft I write straight through, for myself, before I show it to readers, and then I will ask for just line edits and clarifications. That's it. And then it goes out. And I write the next one.

I love genre fiction. I respect its practitioners. I will promote my work in that realm, and I will happily continue to work and associate with my genre writer friends.

But ladies and gents, I am a fucking artiste. I'm done trying to be anything else. I work for me, I probably won't make a living at it, and who cares.

See, figuratively of course, in a moment strongly reminiscent of the ending of the Wizard of Oz, Nick gave me a box. And in that box, formed of letters cast in lead and crusted in sequins, were the words, 'Fuck You.'

And now, if someone says, "the lead character seems sort of lost," or, "this weird stuff goes on for too long," or, "this would be a lot more commercial if the lead character weren't mentally ill," rather than experiencing the sinking feeling that I'm a complete fraud who has no idea what he's doing, I can simply hold out the box and show them the words. Since I'm a literary writer, if my work is easy to read, I'm doing it right. And if my work is hard to read when I know I'm doing it right, then I'm doing righter.

It promises to be very convenient.

Here are the two drives behind all this. The need to achieve, and the desire for affirmation and approval. Now I'm at the point where the more of the former and the less of the latter I have, the better.

Thinking about this over the last few days, I've come to realize that this applies to more than just my writing. Or my visual art, for that matter. This is part of that maturation process I've been trying to get into. Working with confidence. The ability to say, "If you don't get it, it's your problem," and walk away.

Why am I in school rather than hustling to make a buck with my skills? Because I want affirmation. I want to have someone tell me my shit is worthwhile. Well, I've gotten that. It's time for me to stop delaying and just get my shit together.

I feel a sense of balance and strength I've never experienced before, and my manic state is quite mild, thank you. I'm beginning to get a sense of my proper time and place. And in the interests of the hustle, I'm going to go send a few emails in relation to a notion of mine that might bear fruit.

Okay, world, I get it. I'm worth a shit. Message received; over and out.
Posted by Sean Craven at 7:44 AM 4 comments: 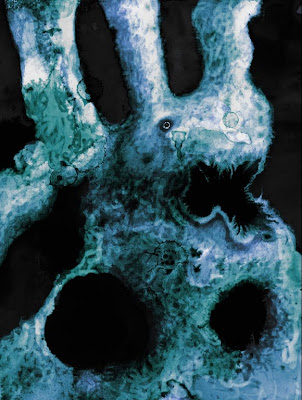 Oh, my good golly gosh. I go away for a little while to take care of business, only to find I left a mess behind me.

Yes, it was Ada, she of the glitteringly intricate historical horror, who asked the question about the semi-colon! Dang, sorry about that, Ada. No slight was intended; as I've mentioned elsewhere, I have become a comically absent-minded individual recently.

I'm studying two texts on the semi-colon question, but honestly, at the moment I've got tons and tons of swell blog posts (I've invented another new instrument, for example, changed my mind about getting a stereo, have found a likely ancestor of Don Marquis's Archie and Mehitabel, complete with Rube Goldberg illustration and three one-hundred-year-old stamps, thoughts on constructing a novel, thirteen ideas taken from my compost heap, and so on) that I'm not allowed to write about until I get further along with fucking Swill. Which I'm going to work on now, in a state of flustered terror.

Cathy may be gone, but as long as I live, her plaintive 'aaaaaaack!' and fist-sized panicky sweat-globs will live.
Posted by Sean Craven at 5:55 PM No comments: