The State Of The Novel 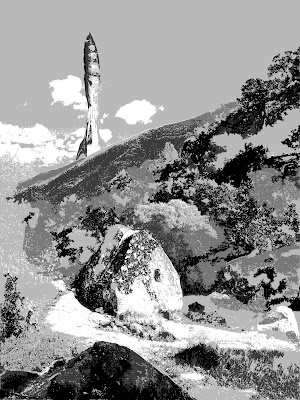 Been too long since I made an image. This is an early experiment with a new technique. The goal is to get something resolution-independent, so if I get a chance to print these large they'll look good. They need to reproduce via Xerox. And they should depart a little from the photographic look of the last batch. The various components of the image blend more smoothly if things are a little abstract.

The thing about this technique is that the luminance of the image is drawn less from the photo and more from imagination. Next time, I'll start with a neutral gray image and add tones globally from there.

I hate getting up every day, and trying to write, and either producing circular dithers or dreary statements of the obvious. I know I'm retraining my brain after withdrawal from the psychiatric medications, and that confusion is one of the symptoms I'm facing, but it sucks. It really sucks. It is like missing a hand or an eye or something...

That said, on the days when things work, it feels good. I was working on a piece the other day and I felt...

You ever see someone framing a building with one of those overweight hammers that destroy your elbow? Set the nail with one tap, then drive it home with the next, perfectly countersunk, one after another.

When I'm writing right, it feels like driving nails, and a few days ago I turned out a piece that will make readers feel those nails go right into their skulls. Bang, bang, bang.

But I haven't been able to make any progress on the novel in a couple of months. Here's what happened.

I got one bad review session from my Monday night group. I have two writer's groups that I work with, mainly, and on Monday night, the people I work with both write commercial fiction that falls under the broad heading of thriller fiction -- one police procedural, one urban fantasy. As a result, their ideas about the function and importance of plot are quite different from mine.

In this particular critique, there came a point where particular scenes involving leisurely, intimate, low-key character interaction came under fire, and it was suggested that if these scenes were pared to the minimum necessary to serve the plot, the book would have greater appeal to more readers.

And oh, my sisters, and oh, my brothers, when their polished ivory grins parted to release the words, 'more commercial,' it filled my heart with dismay, it smirched my pride. And oh, my aunties, and oh, my uncles, I must confess that in a relatively controlled and low-volume way, I lost my shit.

I believe I may have used the word 'art' in reference to my work. It is possible that I spoke slightingly of commercial aspirations. It may be noted that the modifier 'relatively' renders the rest of the modifiers meaningless, and when I saw the expression on the face of one of my readers, I felt like an abusive father.

And that's where things stopped.

The problem was, this occurred at a particular juncture in the book. It happened exactly at the transition from the first to the second acts. And when I stopped...

Okay. The book is written in first-person, present tense. Stream-of-consciousness. This is an approach that I associate with social realism, memoir, and other forms where the quotidian details are things the writer assumes the reader knows.

But I'm about to introduce a fantasy world that's modeled the way a science fiction world is modeled. I'm about to riff on things like speculative evolution, subjective passage of time, the world as organism, and so on and so forth.

In those days, one of the functions of fiction was to act as a travelogue. It was assumed that the reader hadn't seen the settings of the scenes, wasn't familiar with the people, didn't know the lay of the land.

And these techniques are still used for the same purposes in genre fiction. And in previous drafts, I enjoyed a dirty little transgressive thrill by using those techniques in a self-conscious fashion.

But stream-of-consciousness depends on justifying every word as a thought. Which makes those techniques unusable.

You know how in the movies, just as they start crawling across the burning ladder between buildings, someone says to them, 'don't look down?'

You just saw me look down. Listen to my screams doppler into the distance.

But the aftereffects of the medication aren't the only problem. I stopped going to school last winter, and the lack of routine, demands for production, and simple human contact are taking a toll on me. I used school as a substitute for work after I was disabled. Now I'm not sure what to do.

Because if all I'm doing is writing, I deflate. I lose interest. There's a certain critical mass of creativity that I hit, and it depends partially on my pathology -- watch me get crazy in the spring and fall! -- but a lot of it has to do with stimulation. There's a connection between writing, the visual arts, and music in my mind and I need them all going if I'm going to have any of them going.

So, with that in mind, I started in on another round of prints for Swill -- see above. And after working on that all day long?

That night I realized that I could use montage and other film techniques, and that while these can be clumsy in past-tense, they actually share a lot of characteristics with stream-of-consciousness, and will transplant neatly.

I also realized that I wasn't being true to my lead character. When he first walks into the alternate world, I just have him blithely go on and observe, when this guy?

He would be observing, and analyzing, and speculating, and coming up with genre-inspired explanations for the situation. This also gives me a chance to do more with imaginary biology, which is one of my favorite subjects.

So that was a couple of days ago, and my attempts at furthering things failed again. So I did the obvious, printed out the manuscript, and read it. It dropped through my brain like mercury through water, smooth, heavy, and fast. Have you ever watched a dog eat something and then be actually startled by the fact that they've finished it all of a sudden? It was like that. Aside from a few visibly bum sentences and some passages that seemed depressingly redundant? I couldn't get a fucking grip on it. I couldn't understand the fucking words.

So I wandered upstairs, and did some preliminary wandering around on the internets before working on another project.

And I saw this. Nick Mamatas is offering bargain editing this week. Won a Stoker for editing, nominated for a Hugo... Not a lightweight. Knows literature as well as genre.

In fact, Nick was the one who convinced me to write this as a straight-up literary piece in the first place.

Well. As I always say, I don't believe in supernatural forces but I do believe in spooks. So I'll be dropping off a copy of the first seventy-nine pages with him tomorrow evening.

This should be interesting.
Posted by Sean Craven at 7:42 AM 3 comments: