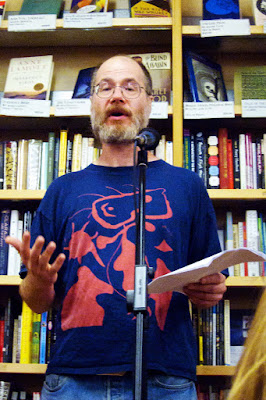 (Photograph courtesy of Kent Young,
who may well have been my first babysitter.)

A Brief Exchange Accurately, if Dishearteningly, Reflecting the Level of Discourse:

The Sister: What's with that balloon-headed dwarf on your shirt? Is that supposed to be some kind of retard?

The Oaf: It's a Miro, you cretin. You know, Miro? The painter? Idiot. I scored it at a gay couple estate sale. That's where everything I wear comes from these days.
So Friday went well. I was planning on doing a greatest-hits report on the reading, but Joe Clifford beat me to it, and said some very nice things about me. Frankly, I'm probably going to re-read that post every half-hour or so for the rest of my life. For the record? The show was strong from beginning to end, and it was a particular thrill to hear Mckay William's first reading, a genuine slice of history.

If you didn't read Joe's piece already (you should), he very generously praises the honesty of my execution. Well, I took some risks on Friday and I did so in order to achieve a greater degree of openness.

The last piece I did was the story of a physical assault, and my delivery was extremely aggressive. This time, Joe and I discussed the idea of pulling back. Joe mentioned David Gilmour's vocals in this connection, how he used flat expression to allow the listener emotional room for response, and that made me think of the old-school country and folk I love.

It also made me realize something. As we approached the reading on Friday, something was itching at the back of my head. In Joe's post, he mentions the significance of persona. Well, I realized that I was specifically looking forward to delivering a number of extremely confrontational lines, stuff along the lines of "Nothing kills a budding romance with a revivified suicide than her discovery that you've been stroking off to her debris."

And I realized that that particular type of provocation is defensive. That by putting physical necrophilia on the table I drew attention from emotional or spiritual necrophilia.

It also, let us be honest, makes me feel tough and dangerous to say crazy shit. I have some fairly serious social anxieties, and I have an actual fear of crowds. Despite this, standing up in front of an audience is one of the most natural, comfortable experiences I've ever had. I love it, but there is an edge to that enjoyment of the experience. To grip an audience firmly by the face, finger in the eye socket and thumb hooked under the jaw, to make them watch me draw the blade and force it in...

Have you ever had to fight a crowd? Physically? It is a moment of complete abandon. It is like taking flight. When you know the worst will occur, you are free.

The freedom to do nothing but fight.

That is the freedom performance offers me, but performance is not a fight. The initial creative act is mine, but after that I work for the audience. I come from a preaching people left and right, mother and father, and while my beliefs are not religious, my concern is with the state of the human soul, and this requires honesty first and foremost.

And I realized that in this piece, my confrontations were internal, and that if I were to deliver an honest experience, I needed to invite the audience into my world rather than assault them. That those nasty, brutal lines I had delivered over and over in my mind had to go.

When I was at Taos Toolbox, there was a sign on the wall. In big red letters it read, "Kill Your Darlings." Everyone who really writes is nodding in sympathy now.

I was fighting this in my head all day long. I did not make my decision until it was time to start reading.

I did my final line-edit while I read. I removed -- and I believe I did so seamlessly -- the most aggressive, confrontational passages in the manuscript, shifting the focus from shock value to introspection.

It was the perfect choice for me. A situation of maximum risk, where I felt a sense of absolute control. (This was an illusion -- I completely forgot about the existence of the mic, and just spoke as loudly as usual. It worked out, but next time, damnit...) Engaging the crowd, reading, performing, and line editing at the same time felt as though I was tap-dancing on a high-wire. Only perfectly normal, as though it was an embedded function.

I believe I need to find ways of doing this a little more often.
Posted by Sean Craven at 10:03 AM No comments: