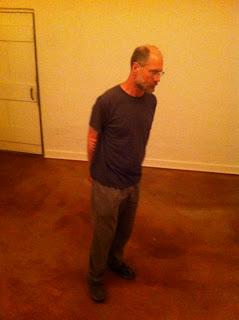 Confronting my social anxieties and sense of alienation has led me to have a much greater interest in people, and the more I find out about them, the more I understand just how weird I actually am.

On one hand, I am nearly fifty years old, in debt, and conventionally unemployable. On the other hand, I am an oddly accomplished and impressive individual. "I'm worried that you might be experiencing grandiosity, but it's hard to tell," my counselor told me at one particularly ebullient point, only to qualify that statement later in the session with, "No, you're definitely not grandiose, you actually are what you look like. But we might want to keep an eye on things."

I am dead broke. Have been for years. Despite this, between my hobbies and my friends, I live a middle-class teenage dream life in many ways. And I have to fight to appreciate my prosperity, while the poverty is slowly smothering me.

To tell a homeless man that I can't give him money feels terrible. To do it on the way to the store with exactly enough money for a pre-decided purchase makes me feel like a turd with a cherry on top. But this guy has told at least one woman my name, and now I have to say no to her as well. And he has medical coverage and I don't.

The trivialities of the pleasures which sustain us are impossible to rationalize when held against the cost to the world as a whole, and if I do not engage myself thoroughly and productively in the world of trivial pleasures, it causes hardship to those immediately around me.

Again, from counseling: "The thing is, all of these mental illnesses and symptoms are actually advantages under the right circumstances. When I'm really functioning, it's all useful." My counselor said, "That's not the way it usually works, but in your case it's true."

I have always regarded myself as a cipher, an invisible man, a social and sexual nonentity. Oh, brother, who was I trying to kid? The problem is that I am the exact opposite. I am a projector, I am one of the people who sets the tone of the room. The problem is that a lot of the time I am fucking miserable.

But when I'm not, holy shit. Nobody warned me about this. It turns out that thing I do with animals and kids works fine on adults, I just never thought to try it. Now I have to be fucking careful not to let it get out of control. People pushing me ahead in line, cashiers giving me discounts, people starting conversations with me and then asking me if I'm an artist or writer and then asking where they can find my work. I seem to look as if I'm a big deal of some kind.

It was only on Friday that I finally understood the look. I frequently find people giving me a look that is all eyes and no mouth, a straight stare that always impressed me as hostile, always aroused a feeling of physical defensiveness. And a lot of the time, it comes from people I find attractive. This is one of the main reasons I've always assumed that women have a specific distaste for me. (Most of my closest friends have been women, and I usually wind up bitching to them about this, and yes. Yes, there is irony here.) You know what the look is? It's someone who's been caught staring, and who doesn't know how to respond, and can't quit.

A lot of what I've experienced as hostility in life makes more sense if I assume that I'm someone capable of arousing strong emotions in people, and sometimes those emotions cannot be fully controlled, and sometimes they don't feel good. I always knew this was true of everyone else, but now I know I'm in the game. And I'm not used to it. It's intimidating.

And it's playing out at home. My relationship with the missus is in some ways better than ever, but there's a roller-coaster aspect to things. We're both people who live in a permanent moment, and when I'm up, she's thrilled with me, and when I'm down, she's not. And I'm up and down. A lot. So one day I'm a hero and the next I'm a slug, and a spouse is supposed to dampen your mood swings, not accentuate them.

Under other circumstances, the downs would predominate. My current anhedonia and irritability would typically indicate a paralytic depression, but I've got a lot of work to do, and it's all going to particular people. I'm too connected to the world to go into a complete depression.

But I've had enough good experiences over the past few years to understand something of what it feels like to be fully engaged with life, to abandon the self-destructive impulse in favor of a joyous course of action. I know what it takes.

And some of what it takes, I ain't gonna get. For instance, you know what makes me feel alive? Really alive? Risk-taking, especially if I get to feel like a tough guy. (For the record, wanting to be a tough guy makes me a member of the big baby club. I know that, you know that, everybody knows that.) You know what quality is most strongly associated with longevity? Prudence.

Me. Talking about longevity. So many friends, so much to do. Perhaps it is time to begin the horrid, snivelling process of clinging to life, sucking at the last crumbs as though they were the grit in the bottom of a bag of Doritos. What if I start liking life so much I get scared of death? I've seen people that are scared of death, and it looks horrible. Rather vomit blood, thank you, and even that would be worse if I was scared of death.

You can't do anything if you're scared of death!

I grew up in book culture. My grandmother was a librarian. Since childhood, the hunt for used and out-of-print books has been at the core of my recreation. I learned design as well as art and writing because I treasure the book as object, the unified package as a form of art. I like hanging out in bookstores, and I'm known by many local booksellers. One of my hidden drives to succeed as a writer was so that I could see MY books on THEIR shelves, that I could earn the insider feeling I get when chatting with them.

But there is a lot of crookedness and ineptitude in the traditional bookselling world, and once you've seen a dumpster full of coverless paperbacks, it's hard to retain enthusiasm. It's been years since I've read much for pleasure, and my professional fiction sales have been to e-markets. If I mention a sale, I get a look of hurt, puzzled confusion from my 'real' book friends.

And of course, this brings us back to the triviality of the culture in which I seek to embed myself. But who am I to bandy words like 'trivial?'

Nobody's heard of me. I have no Amazon reviews. Nada. (Okay, my story in Future Lovecraft gets a mention or two.) My pro sales are pathetic. But you should hear the things they say about me! It would make you sick. It makes me sick, but I can't get enough of it, and I doubt I ever will.

Of course, the obvious reason I'm unknown is that I have yet to present a major work to the public. If I've ever written anything with (ugh) sales potential, it is the current novel. At least a couple of respectable and respected writers have agreed to look at it, and if I can get a blurb or two, then I actually have a shot in the marketplace.

But the idea of hitting it big with one book is silly. I probably won't have a clear idea of my place in the market until I've got at least three novels out. And even then, it isn't a profession that allows for stability or smooth sailing.

But things are going so well for me creatively I can't concern myself with success. I'll write a post in the next day or two on my current and prospective projects.

I just wanted to explain why I haven't been blogging lately. I have been busy going sane, and it's a longer, more arduous trip than I expected.