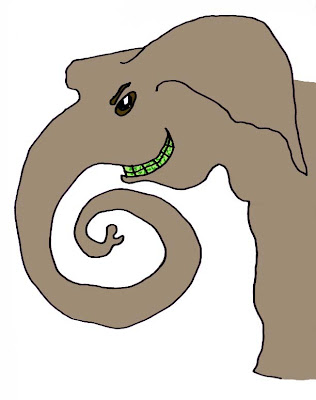 Look, let's be serious. I am pro-zoo, but there are some animals that simply do not belong in a zoo setting. You look at the elephants in their pen, and it's hard to avoid the idea that given the size and nature of their confinement, what you're seeing is the equivalent of making a small group of people live in a goddamned bathroom. Elephants are long-lived, wide-roaming and highly intelligent. It's no wonder that they'd get a little crazy after being forced into a small enclosure for years.

I remember when I was a kid, some lunatic at the Oakland Zoo decided it would be a good idea to put a baby elephant into the children's zoo. While it was behind bars you could reach and pet its head. Which meant that it could reach out with its trunk and pet you. I was enchanted, of course, and the elephant seemed to take a shine to me. I spent a long time talking to it, scratching its head, letting it put its trunk around me.

But when I thought it was time for me to move on, the elephant thought otherwise. It grabbed my arm and stuck it in-between its trunk and its little baby tusks, and it would not let me go. Poor thing must have been lonely, but it was a curious position for me. On one hand, there was a sense of being deeply complimented. My love of animals made this an experience to be remembered and relished.

Still, it was a bit uncomfortable to think that my new friend could easily break my arm with his nose. After a while some keepers came. One distracted the elephant with apples while the other two pulled me loose. I came out of it feeling sad for the elephant, who must have been very lonely.

A few years ago, I went back to the Oakland Zoo with the Hon. Richard Talleywhacker and his son, who was a toddler at that point. The zoo had changed drastically since I was a child, and all for the better. The vast majority of the animals seemed to have been properly housed, and there was a general lack of that prison-camp atmosphere that can make a zoo one of the most depressing treats life has to offer.

Until we got to the elephants.

We wheeled the slumbering Young Master Talleywhacker up the ramp to the elephant enclosure.

"Should we wake the kid up?" I asked.

"Give him a few minutes," Richard said. And then I saw something that made me very glad that innocent child had his little eyes shut.

It never is. Hallucinations are nowhere near as weird and appalling as reality.

"Richard," I said. "Is that actually fucking happening, or are my eyes bad?"

At first glance I thought one elephant was pressing its head against the ass of another elephant. Which was true. But where was its trunk?

Where was its trunk?

Elephant A had its trunk firmly and fully inserted up the ass of Elephant B. I mean all the way. All-the-way.

Thanks to the internet, I can tell you that an African elephant's trunk is five to six feet long and weighs up to four hundred pounds. Now that is what I call a serious butt plug. I mean, an elephant's ass is pretty roomy, but still. And what the fuck do you even call that act? A Serengeti Steamer? Naso-annilingus? Man, I wish I knew Latin.

I had to wonder if either of those pachydermatous degenerates was my childhood friend. As I said earlier, elephants are long lived.

As we stood there, stunned, things got worse. Elephant A pulled its shit-crusted trunk (Dude, I wanted to scream, that's your nose!) s-l-o-w-l-y -- sensously! -- out of Elephant B's asshole. Oh, that was bad.

And then, again, it got worse. When the tip of A's trunk finally saw the light of day, it was clutching a steaming lump of something green. Which A then popped into his mouth.

And then, chewing thoughtfully, he went back for more. He was actually reaching up the other elephant's ass so far he was able to grab the shit while it was still green. It made me want to floss.

"See," I said. "This is exactly why prison reform should be America's number one social issue."

That broke our horrified paralysis. Gently wheeling the babycart around so as not to awaken the slumbering infant, we silently went on our way.
Posted by Sean Craven at 9:11 AM

Oh man, Chia already left my comment. But... Oh, man. The mortified laughter will not stop.

What the Honorable Oaf Boy describes is accurate. I was there, Bog help me, and I witnessed the entire spectacle. The horror, the horror...

There is one small discrepancy though -- the Little Tallywhacker was not, in fact, asleep. I did my best, while trying unsuccessfully to avert my own gaze, to direct the little tyke's attention elsewhere. "Look at the giraffes, son. Look at the the giraffes. Oh! They eat hay! Do you eat hay? No, no, of course you don't eat hay. I don't eat hay either, do I, son? No."

While it appeared at the time that my directions were followed, I can't help but imagine that the experience that day has something to do with the way he draws animals, not just elephants and giraffes, doing unspeakable things to one another. In Technicolor.

Or perhaps there really is something to this thing called "genetics".

BTW, I love the green teeth in your illustration. Really captures the moment...

Actually, coprophagy is not uncommon among ungulates, and even some carnivores, notably canids. There is frequently considerable nutritional value that that didn't get absorbed by the original eater. Plant matter, other than fruits and seds is usually pretty difficult to digest fully. And in the wild, giving the former food another pass through can make the difference between surviving or not.

That said, I've never heard of a critter not at least waiting until it hit the freakin ground and maybe cooled off a little, fer chrissakes.

BTW-- you should see how they extract semen from rhinos. Hint: it involves sedation and electrical (rather than mechanical) stimulation of the prostate and seminal vesicles. . . The technical term is "electroejaculation".

They seem to enjoy it.

That should have read "ungulates and other large grazing animals".

I stand corrected. It was my understanding that bull rhinos are frequently not (is "laid back" the right term?) for the crew to want to be messing around with their nether regions with them fully conscious.

And, yes, he did look to be enjoying himself, but an animal that large is not something I'd necessarily want to be in a small pen with in either the throes of passion or in a pissed-off state.