From the Valley of Lost Projects -- Greetings From Grid City or Cyberpunk: The Future of my Youth 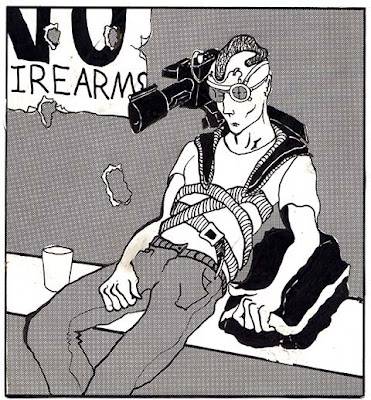 You know how old fashioned cyberpunk is? This was done using Zipatone. And Grid City, the comic script it was based on, was written on a typewriter.
Well, I promised a non-mopey update. I didn't get any work done on my novel this morning -- I used up my juice on three short fiction pieces for the next issue of Milvia Street. But here's a blast from the past, the first time I tried doing a comic book story. I wrote a hundred and thirty pages of script and some concept drawings and that was as far as it got. I gave up because I thought I sucked; now I look at this stuff and think, hey. Back in eighty-seven this would have been a hell of a comic book. 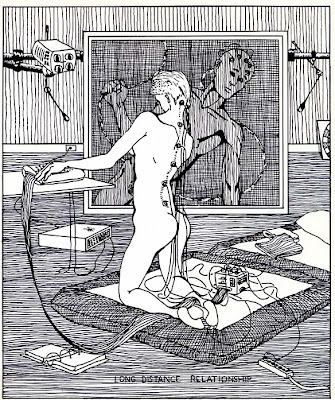 These two are a couple of good-natured drug manufacturers. When they combine cocaine with the amino acid precursors to the neurotransmitters whose release is stimulated by coke they have a hit on their hands. Too bad it winds up making people allergic to their own neurochemicals... When I heard the story about people getting those kinds of reactions to aerosol pig brains I got a nostalgiac glow. Oh, and the benefit of this rig is that they can each choose their favorite details for the lovemaking session without bothering the other person.
When I first read a review of Neuromancer in Heavy Metal I avoided reading it for a year just so I could let the idea of cyberpunk twist in my punk-rocking SF geek brain. When given a copy as a gift, I fell in love with it and tried to push it on my brother. "Fuck that," he said. "I've got this copy of Omni with a story called Johnny Mnemonic. It's the best fucking science fiction ever!" Took us a while to put two and two together. William Gibson, Rudy Rucker, Bruce Sterling, John Shirley! I salute you! 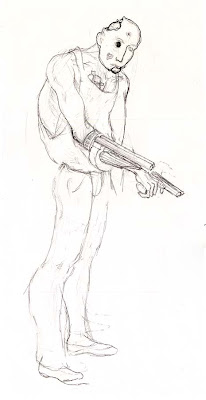 Any Big Black fans out there? This here's Dead Billy. He's a former soldier who had a Tin Man number done on him. Is he is or is he ain't a person? Who knows -- just don't get on his wrong side.
The Grid City script is long gone but I did write a short script for a screenwriting class that draws on the background. Ol' Dead Billy and his main squeeze Helter Kitty play prominant roles. The teacher said, "Give me something as weird as you can imagine." Well, I wasn't going to do that -- but here's a compromise.

Take a look at comment number one for the animation script Chad and Debbie's Vacation Wonderland!
Posted by Sean Craven at 3:31 PM

This stuff is terrific.

I'm going to try and do a post on a similar project -- only this one failed because of collaboration. It's a funny animal comic, may the Flying Spaghetti Monster have mercy on my soul.

Dark and comical stuff. (but then i think a guy being turned into a pattern on the wall by a rocket launcher is hilarious.) Keep this style of writing alive, heck you may even be able to write campaign stories for Cyberpunk:2020 in the future.