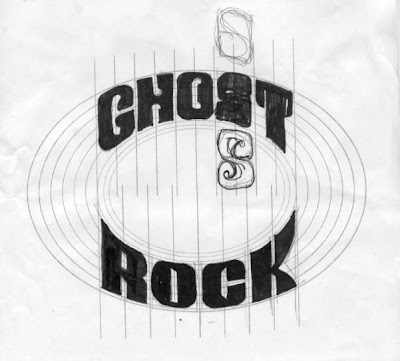 This was the last thing I was working on when I shut down in mid-January. Hand lettering is something brand-new to me, and I think I might need to work on it as a general skill. There's something about unifying word and image that exerts a certain magnetism...
I'm definitely out of the Vale of the Shadow. I'm busy again, functioning unsteadily but with will and effect. I would have started work on the next issue of Swill yesterday, but I made the mistake of deciding to take out the last major pile of crap in my studio.

What looked like a box and a couple of bags turned out to contain everything from old bank and school records to crumpled sketches and lyrics to a highway patrol signal and a decaying fencing mask, all woven together into a solid mass by a collection of cables ranging from MIDI to USB, with connections ranging from 1/8 inch to RCA, many with adapters of one kind or another dangling from the end. Partially unraveled, it's covering most of my floor right now.

I suppose that if you don't clean a room for three or four years while actively accumulating crap, the results should be predictable. Hopefully, by the time this is done, my gross lair will be a terrifyingly functional media laboratory.

It is a dream of beauty, is it not?

And before I came upstairs today, I uncovered the manuscript of the fucking novel. It just needs a light line-edit and gork-removal before going out, and I will return to that project before I stop working today. Up top is the state of the cover, and just below is the current state of the query. (Sorry to keep you waiting, Neil.) Does this hit the right note of balance between literary and genre? Who the fuck cares -- I managed to fit it on the page.

Gentle because he knows his own strength, patient because he fears his own temper, Matt Cassad stands apart as he wages war with himself. When musicians Lulu and Willy come to visit, Lulu’s otherworldly vocal harmonies blow through reality and propel Matt into a decaying afterlife where he struggles to heal a cosmos that’s half organ and half artwork. Lost in a hallucinatory wilderness, Matt is forced to defend himself against a pair of muggers-turned-monsters. Pursued by their angry ghosts, haunted by his own savagery, Matt is taken in by Corrie, a green-haired woman who says she’s the survivor of a lost Colonial village. Matt is heartbroken when he’s pulled away from her, back to Earth, but he doesn’t go home alone. One of the ghosts invades Matt’s house, screams through the wiring and possesses the appliances. With Lulu and Willy threatened, Matt returns to the afterlife in search of a solution only to find Corrie’s world terrorized by the other ghost. Caught between life and death, fighting for a chance at love, Matt finds three unexpected sources of strength. True friends. True heart. And the power of rock and roll.

American culture, history, and mythology seethe in GHOST ROCK, a novel complete at 53,000 words. Patrick Nielsen Hayden of Tor Books has requested this manuscript and graciously instructed me to mention this.

I’m a writer, artist, and performer living in Berkeley, California. I wrote many episodes of the award-winning, BBC-broadcast cult cartoon Thugs On Film, among other Mondo Media productions. I’ve worked as a writer, editor, and artist in the underground press, primarily for Swill magazine. I’ve studied genre fiction at the Viable Paradise and Taos Toolbox writer’s workshops. I’ve had two short stories published professionally, Tourists at Tor.com, and Deep Blue Dreams in the anthology Future Lovecraft from Innsmouth Free Press, to be re-released by Prime Books. My Amazon page is at (my Amazon page). An interview concerning the artwork done in conjunction with this novel is posted on Scientific American’s Symbiartic blog. And my performance work – which also spun out of the novel – has been favorably remarked upon here and here.

Thank you for your attention,

Sean Craven
Posted by Sean Craven at 9:28 AM 2 comments: 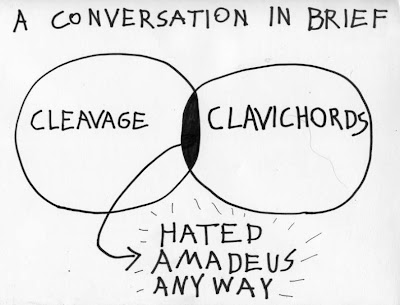 Ah, Amadeus. When the best part of a movie about Mozart is part of Leila from Repo Man, you know something has gone seriously wrong.
Things are definitely picking up. I'm starting to function. I recently edited a novel for a friend, the studio is clean enough so that I'll be able to start in on Swill production today, and I finally acquired a little super-speed to accompany my other gifts. What can I say; if I were a superhero, I could be accurately described as multi-originistic.

I'm not joking -- I have, in point of fact, acquired a low-grade superpower over the last couple of weeks. That's the thing about my brain. It's like one of those British sports cars that is amazing to drive when it isn't in the shop.

It started two Fridays back, and I've had enough time to mess with it so that I can say, yep, it is a real thing.

On Fridays we have what we call band practice, which sense the encroachment of time constraints and general life-pressures has reduced to the hon. Richard Talleywhacker and myself splitting a six-pack and playing the same seven or eight songs over and over and over again every week. It is a form of essential psychological hygiene.

Anyway, one of the songs we do sometimes is a little number called Bucket of Drugs. (It's about not having access to drugs, actually -- "It turns out I'm an idiot who tries to find some thrills/by mixing kava kava with herbal diet pills," that sort of thing. Dates back to a more rudimentary state of my development.)

It has a particularly brutal combination of pace and fingerwork, and we have always assumed that a certain amount of hapless flailing about was part of the charm. That bastard Talleywhacker's guitar has slowly been improving, however, and the broken shamble of my bass has grown more awkward by comparison.

So as the beats leading into the song thumped out of the monitor speakers two Fridays ago, I had a flash of rapid reasoning.

There is a state I enter into fairly readily. My hearing fades, my ability to be interested enough in language to process it goes away, and time slows down. While in this condition, I feel a sense of power and control, and my emotional state is best described as cold reptilian arrogance.

For years this frightened me, but then I found out what it was. The first clue came from the Malcolm Gladwell book Blink, where he described the state and explained that it's the most extreme level of fight-or-flight response before the body simply goes into shock and prepares for a beating.

This fit in neatly with my post-traumatic nonsense. (From the novel: "You are post-traumatizing the shit out of me!") But in that sharp moment of focus before the song kicked in, I experienced a brief moment of frustration at the tempo, then remembered my various experiences of flexible time. And then...

I had a friend once who was into biofeedback. I remember being amazed at his ability to speed up or slow down his heart-rate at will -- until I tried it, and realized it was a simple, obvious, natural function that I had just never tried to access. It's a neat trick, once you get the hang of it. Gotten me through a few stress reactions.

So I decided to try and slow time down. Not as radically as when I go into killer death lizard mode, but just a touch, just a tweak of the controls.

It turns out that it's easy -- I mentally reduced the tempo of the song just as if I had turned a knob. Instead of hitting wrong or off-time notes, I was dead-on aside from a couple of moments when physical fatigue proved overwhelming. It was the hardest playing I've done in a long time -- I could feel the burn all the way to my elbows in both hands, but I played the fucking song right.

And I did exactly the same thing this last Friday. And I've been playing little games and experiments with my sense of time. Right now it feels as if this actually links up with my patience, my ability to disconnect and enter into a flow state.

In other words, my entire sense of the passage of time is controllable to some degree. I can speed up to make decisions and coordinate rapid physical activities and slow down to endure boredom and isolation.

That's pretty good, brain. What else you got for me?
Posted by Sean Craven at 8:12 AM No comments: