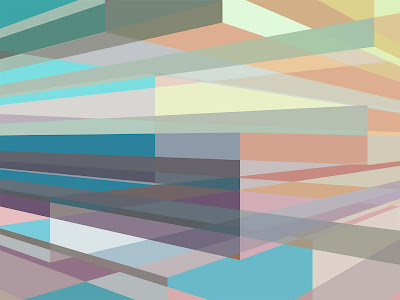 I am about to go for a walk with my new puppy. I'm going to pick my nieces up from school. That's right -- the oaf is going all Beverly Cleary on your ass. Just try and stop me. I will be the wholesomest motherfucker you have ever seen.

Before I split, I thought I'd mention a shift in the novel. The chapters have been five to ten pages long up until this point. I've doubled the length of the chapters, and it's been a surprising thing.

See, there are three main streams in the novel. The real world, the imaginary world, and the experiential state that lies between the two, a state that seems revelatory or insane depending on the circumstances. In earlier drafts, an individual chapter would have one or two of these elements in it. The result was very choppy.

By doubling the length of the chapters, each chapter has some of every element in it, and as a result the work reads a lot more smoothly. It's pretty busy, but if you read the first chapter you do indeed have some idea of what you're in for. Which wasn't the case before...

Anyway. It's a few hours later, and I'm waiting for Homework Club to commence. I'm a little shocked -- they let me go right into a public school and grab a child. I think it was the adorable dog that let me slip through the safety net.

Oh, man, though. Talk about dog drama. When we left, Roxie the terrier began to cry, and went about acting as though her heart were broken. And when we got back, she actually raced up to Laszlo and frantically greeted him -- "Where the hell were you? I was so worried!" She's been warming up to him by increments and this was a major step forward.

So tomorrow I'll bring both the canines. We'll see how that goes.
Posted by Sean Craven at 1:47 PM 2 comments:

So How's The Novel Going? 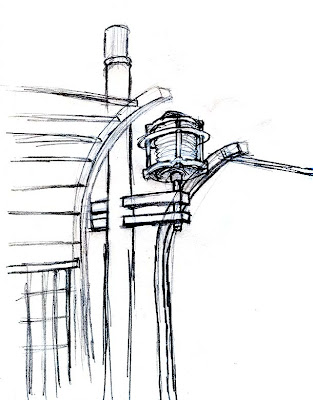 Even an hour or two worth of practice once a week or so (hey, Deborah!) is enough to start stripping the rust off of my draftsmanship. One step at a time...
So how's the novel coming?

Well, classes have started. This semester I applied late, and wound up not being able to get a full course load. I'm trying not to look at it as a disaster. I'm taking courses in grammar and scientific literature. The scientific literature course is already a blast. I feel completely at ease with the material and the instructor. The fact that it's a requirement for going through the biotech training program has provided an interesting side effect -- lots of cute girls in the class.

When the one in the pigtails with the eight-inch skirt turned around so she was perched in her knees in her seat and chirped, "So is this class fun?" the gulf between our species appalled me. I doubt that our kinds will ever be able to communicate.

I considered letting myself develop a travel-sized crush on the crabby-looking one in the leather aviator's cap, though. If Rocky the Flying Squirrel was the brooding, moody member of Shonen Knife, that would be exactly what this young woman looks like. But I'm not actually attracted to her. It's more some kind of weird sidekick thing. It's probably the Bullwinkle in my soul.

I showed up a month early for my grammar class, based on email communications. If I'd gone by the catalog, I'd have been a month late. Wheee! Someone took me aside and gave me a lengthy, roundabout little lecture in which he more or less said, 'this is fucked and nobody has any idea what's going on.' Good to know.

Yeah, I've been cleaning my studio. It's in better shape than it's been in years. Scored some CD racks at a yard sale this weekend and mounted them on the walls yesterday; for some reason, they make the place look like a used bookstore, which pleases me. And I fixed that busted drawer in the bedroom; actually, I just swapped it out for another one. But I've been pretty busy around the house, yeah.

Going out to sign the last papers on the house sale this afternoon, start paying for some motherfucking groceries, you know? Actually, I've decided that as part of the overall studio renovation, I'm going to get myself a real stereo. No high-end audiophile stuff, but something better than utility grade. I'm fucking forty-five years old, for christ's sake. I shouldn't be listening to music on fucked-up yard-sale boom boxes.

So I've started doing a little research on the subject. Found out that you need to match components properly and so on and so forth. There's a high-end stereo place I pass on the way to school. I think I'll drop in and ask a few questions -- and hell, they might have something that would suit me. You never know.

It's really interesting. One of the side-effects of my attempts to get an understanding of my position as an artist has been a recent shift in musical consciousness. See, my relationship to music was formed in the last century, and as a result, music is not just a matter of hearing the tunes -- there's a whole set of relationships involving physical possessions, the art and writing associated with an album, the very concept of the album, and so on.

I've decided that for now, I'll embrace that. The twenty-first century relationship with art is not going to be primarily about physical objects (assuming that civilization lasts for a while), but that's part of the whole thing for me. But I wouldn't be surprised if that changed in my old age. I find it easy to see myself abandoning my various libraries and collections in favor of sharing the public informational spaces.

I've been getting obsessed with role-playing games lately, as well. Something tells me I might want to try my hand at something in that realm. I am haunted by the rattle of polyhedral dice; I can see virtue in the works of Erol Otus.

And I've been fucking around with synthesizer stuff in the middle of the night, driving off insomnia by doing a Dr. Moreau on the Pachelbell's Canon in D major. Among other things, I'm doing it in A. I'm starting to wonder if I'm chasing my own tail by trying to vary the arrangement -- part of its effectiveness as a sedative lies in its repetition.

Oh, God, shut up, shut up! Are you trying to fucking kill me? Is that it? You want to see me stretched right out there on the fucking floor, grabbing my chest and blarting out a nasty old death crap right in my fucking jeans, is that it?

Christ. It was going so well until I got sick, and then when I returned to functionality I was fighting on a bunch of different fronts -- I need to rewrite the initial visionary passages to give them an absolutely convincing sense of biological verisimilitude and establish Mr. Popeyehead as a gatekeeper. In the interests of the latter party, I also need to rewrite Matt's most recent incursion into the Limbus. The musical passages that earned me praise from readers up to and including professional writers and working musicians, that really let the reader feel as if they're part of the musical process? That have lasted intact right from the start? Damnit, they need to be rewritten. Too much music theory, not enough emotional description of musical experience. And the next chapter is going to be entirely new, and I'm going to have to start it out with a vista shot of the Limbus as an alien landscape that's going to have to be a fucking heart-puncher to do what I need it to do. And Corrie's coming up and I can't quite hear her in my head. I need to score a copy of The Autobiography of Benjamin Franklin to get a sense of rhythm. I've picked up two copies at yard sales and can find neither.

I've also got my piece for the next issue of Swill weighing heavily on me. It's pretty fucking hilarious, but I need to rework it, need to frame it. Lotta work on that one, and Rob'll have an ear if I fail to cough it up pronto. (The Yakuza technique of demanding a finger as punishment for failure is effective partially since it renders them less effective in combat, and thus more dependent on their comrades. To demand a finger from a writer for deadline violations is counterproductive; it slows typing.)

So that's what's going on with the fucking novel. Sigh. I let myself be overwhelmed. Time to break it down, and tackle it one section at a time, and fuck getting more chapters to my readers until I'm flowing and rolling again. Start off with that first vision, show the stoma as an organism, and go from there.