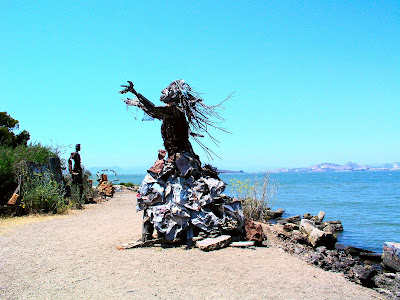 There's some great art out at the Albany Bulb these days, but it's a shame to see the ruins of those great paintings by Sniff.

They were sort of Bosch does Bukowski, with a circus theme, and I think they were executed in house paint. These days the panels they're painted have graffiti all over them, just tags and not even good ones. Oh, well.

I recently received a message on Facebook from a cousin of mine expressing some concern that I haven't been posting. It struck me that there might be a few other folks out there who might want to know what's going on.

First off, I'm doing much better. "I can tell just by the pitch of your voice," my dad said. "When you're feeling okay it drops an octave." The missus is quite relieved. It turns out that she was considering taking me to the hospital while I was detoxing from the meds. Oh, that would have been interesting.

I've established a pattern of sleeping that, while not optimum, is functional and seems fairly stable. And last night I slept right through for the first time since the anti-psychotics.

I'm mostly over the meds, thankfully, but there are some lingering difficulties concentrating, a few weird little intimate issues I'm not particularly enjoying... Ugh.

The difficulty in concentration is the main reason I haven't been posting. Writing is thought made concrete, and my thoughts have been variously flustered and bedraggled. It's been kind of like walking through a flock of muddy pigeons with an open mouth, and that metaphor may serve as an example of my recent writing.

But I have been doing some good writing as well. The novel is progressing, but it's going at a horrible creeping pace. And my decision to keep it out of my writer's groups is starting to feel weird and forced and uncomfortable.

Still, I think that I'm going to change my mind about that decision. Or, rather, I have changed my mind and I lack the fortitude of my convictions, and need to build up a little steam before I act.

I also have a number of blog posts in the works, but I'm starting to face an ugly fact. I want to put better-written material up on the blog, but once I start putting real work into something, I start wondering if I'm an idiot not to try and get money for it. As a result, the story of a memorable beating I received in high school is now being polished with a wistful eye cast toward Salon...

Right now I'm considering my alternatives for counseling or therapy. Under optimum circumstances I'd be in long-term analysis with a psychiatrist, but that isn't really an option for someone in my economic position. I've been considering Alanon, because that's for folks raised by drunks (and so on), I've heard good things about group therapy. I just need to get out there and experiment...

... but I ain't feeling that daring at the moment.

Right now, more than anything else I feel lost and confused and easily tired. The events of this last winter have changed the structure of my life and I'm still figuring out what to do. Out of school, disabled, nearing fifty, career plans derailed by serious health concerns in a collapsing economy.

These are scary facts to be facing, folks.

On the other hand, I have ambitions and the time and means with which to realize them. The idea that I can make a living with my art and writing is not an absurdity. I am surrounded by people who love and care about me. I am not in danger of winding up on the streets, and despite my financial situation I live in conditions of real prosperity -- I eat well, and sleep comfortably.

Right now I'm hunkering down, breathing deeply, struggling to get back to work, and trying to figure out my next move. I'm rough but I am definitely on an uphill slope.