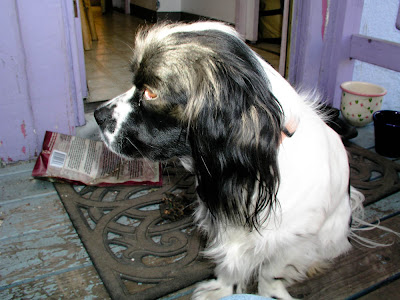 None dare call him Hoverbutt.
So, I haven't filled you in on Laszlo the dog in quite some time. He's now a thoroughly established member of the household, and I have to say it's a relief to have a thoroughly non-neurotic component in the social machine.

And here's the thing. He's my dog. Not a matter of ownership; he's my dog the way the missus is my spouse, or the Hon. Richard Talleywhacker is my guitarist. It's a mutual relationship, mutually agreed upon.

This is kind of a big thing for me. While I'm an animal person, I never really had a dog that was my dog until I moved in with the missus, and her Shar Pei bonded with me. Not to go into the sad details, but the poor dog wound up getting weird around children, so we had to put her to sleep. It wasn't easy on me, and since then I've had a bit of an emotional barrier between me and the household pets. Never thought of them as mine; I loved them, cared for them, but there was a distinct degree of reserve.

But Laszlo won me over. The simple joy he takes in my presence is something I can't help but return. I suffer greatly from anxiety at night, and I cannot express the comfort I feel when I'm laying there in the dark and I feel him stretch out against me or rest his head on my leg. I think of the first day I met him, how I turned around and saw him staring up at me like he was making a wish. I can't help but think that his wish came true.

It makes me feel good.

And like me, he has a tendency toward inadvertent physical comedy. It isn't simply awkwardness -- that lacks the touch of poetry that lifts ridiculous moments into the realm of the sublime. Rather, there is a combination of desperate, frenzied energy and a calm, joyful confidence in his athleticism that is frequently seriously misplaced.

As a long-bodied dog, his specialty is an arching leap that reminds me irresistibly of a dolphin. Shame about the landings, which typically involve the kind of crumpling that makes me fear for his long-term spinal health.

Usually I get to see these when he's getting ready to crash on our bed. His freedom of motion is limited, based on Roxie the terrier's growling territoriality, and the human reluctance to have certain body parts trod upon.

So Laszlo will pick his spot -- usually the lower right-hand corner -- and launch himself in a lovely gravitational curve that ends in a sprawling thump, rapidly followed by scratching, slurping, and snoring. "Sweetie! Watch how he springs into inactivity!"

But the other day he came up with something brand new. I think he may have been the first animal to ever make use of this particular type of locomotion. Science fiction writers, take note. Imagine a world where all animals move about in this fashion.

He and the missus were working on the concept of sit, and he had a conceptual breakthrough. You could see the light bulb over his hairy little cranium. The word, the act -- he was thrilled to sit. (I am not being patronizing. The missus and I are terrible at training the dogs, and they deserve all credit for any breakthroughs.)

So thrilled he was that his hindquarters rose an inch off the ground out of sheer joy. He forced them down again -- which compelled them to rise in response to his triumph. But Laszlo is a good dog, and his will to do right would not be defeated by a happy rear end. Down.

And he lifted. He rose like a fart-powered hovercraft, fidgeting to such a degree as to render himself frictionless on the hardwood floor, and began to skitter about, slowly rotating as he careened off the furniture and finally drifted out of sight into the bedroom. Have you ever played air hockey? He moved the way an air-hockey puck moves.

The missus was almost paralyzed with laughter, but she was still able to clap her hands and holler. "Laszlo! Here! Sit!"

Laszlo shot out of the bedroom, scrambled frantically to make the turn, hit full speed on the straightaway, then sat down when he was six feet away from the missus.

He slid those last two yards in the sitting position and came to a rest at her feet, gazing up lovingly, tail wagging. It was nicely done.

More then that, it did a damned good job of reestablishing his credibility. After that, most dogs would have wound up being labeled 'Hoverbutt' for the rest of their lives, but not Laszlo. It's been a couple of days and the name hasn't come up once. His dignity may not be all-encompassing or of the greatest magnitude, but it can take a good bit of battering and come out intact. Even enhanced.

And let's face it. The typical sit session is about the human telling the dog what to do. That was not the story here.