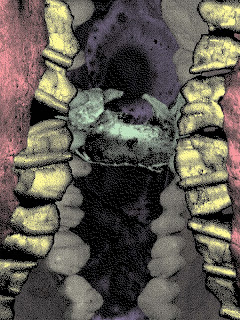 In an on-line group of genre fiction writers I'm affiliated with, there's a discussion going on about violence in writing. It's centered around this essay by Warren Ellis. While Ellis is widely experienced as a scriptwriter, essayist, and novelist, he's best known as a comic book writer. He's one of the best working in the mainstream these days, or at least he was a few years back when I was current with the industry. For the record? This post may seem as if I'm arguing with him. I'm not. I'm explaining myself to my friends.

I got called on losing my temper in the discussion, or at least showing signs of tension. I was a little irked by the essay. I thought it dismissed the actual failings of Ellis's work at its worst, and failed his work at its best. Which is a polite way of saying I thought it was a bunch of self-rationalizing horseshit. HIs position is that many people are confused by the presence of violence, and it's up to works like his to help them understand.

Given my own habit of writing on violence, this would seem to be the kind of statement I'd support. But I think this is a paper tiger. I do not think people who can't understand violence have a problem or represent a problem. And if they do, I don't think violent pop fiction will help them. I'm wrestling with the issues involved in violence in the media very intimately right now, and this statement from whose work I've enjoyed and in some cases admired bothered me.

For those who are not familiar with Ellis's work, as I said, he's one of the standout writers in comics these days. He has written works that he could point to in defense of his position, Fell coming to mind immediately. There hasn't been a better historical comic than Crécy, which is as violent as you could ask for.

But in the majority of his comics work, violence is used as it is most typically used in conventional adventure fiction. It is there to make the lead characters appealingly potent, to establish their value and authenticity. It is there to titillate the reader, and it is frequently executed by lightly- clad men and women intended to appeal to the shallow male gaze. Most troublesome to me, it is portrayed as a legitimate and functional first response to problematic situations, especially useful as a means of establishing and maintaining hierarchy.

I am not arguing that he needs to defend that work.  I have bought much of it, read much of it, and will pick it up and read it with pleasure again.

But it's frequently nasty entertainment. It's not wholesome. That's why I like it. There is a certain British culture of grinning, brutal violence that appeals to me, and Ellis is a fine practitioner of the tradition. But I don't always approve of the things I enjoy. And I won't argue that they have social virtue, because I don't believe it.

When I was in high school, I worked as a teacher's aide and janitor at a day care center. This was during the late seventies, early eighties, and there was a brief Marvel Comics trend as a result of the Hulk TV show. Fights were unusual at the day care center; the kids were upper-middle class, and didn't get hit much at home, so they had to come up with their own sources for the violent impulse. T-shirts were useful in this connection. If a kid wore a Spiderman shirt, they would probably get into a fight by the end of the day. If they wore a Hulk shirt? They would fight. Every time.

I could say that it was because the Hulk TV show taught kids that losing your temper and breaking things fixed problems, but that would be bullshit. It was the image of the strong, violent man that possessed them. If you watched them, you could see them puffing and flexing as the shirt convinced them that they were the Hulk.

The shirt work the kid, and the shirt started the fights. My feeling about violence and the media is that of the old boy who was asked if he believed in baptism. "Believe in it? Hell, I've seen it!"

During that same time, I played a lot of wargames and role-playing games. One of my friends was a former gang member. One night, he found out a friend of his had been stabbed in prison and was on the critical list. We spent that night playing the Melee programmed adventure Death Test. Melee was a game simulating hand-to-hand combat, and we spent the night engaged in slaughter, adding one wet red detail after another to dramatize the roll of the dice and the addition and subtraction of strength points.

My friend was able to sleep that night. I also believe there is such thing as catharsis, and it can serve a healthy function in entertainment.

It is impossible to show someone triumphing in an act of violence without making them attractive in that moment, and that will stir a longing for that sense of triumph in some percentage of the audience.

Can't be done. You can't show someone as powerful and decisive without having people fall in love with them on some level. It's one of the awful design flaws in human nature that have me wishing I belonged to a classier species. Effective people are attractive even if they are having terrible effects on the world around them. Gordon Gekko from the movie Wall Street was intended to be an absolute takedown of a particular type, and instead he became the role model for people in the finance industry.

Or to put it another way. In terms of actually affecting people's behavior, models always work and morals never do, and that is the moral of the story.

But to say that one should always show violence in a negative light, that it is necessary to show the violent person as something the audience should not want to be, is a little pat. And not necessarily the most ethical stance. Because people do face situations of violence in their lives, and fiction provides them with models for handling it. And people's lives can be powerfully affected by their choice of models.

When I first began writing seriously, I intended specifically to write action-horror novels. I was fixated on violent imagery, and I wrote with the intent of forcing the experience of violence on the reader, of making them live through real trauma. However, I found myself unable to sustain interest in violence in itself. And little of my work from that time reached completion. I had no clear idea of how to tell a story.

I devoured violent material. I read a lot of true crime, for instance. After a certain point, I realized that I was actually titillating my own blood lust, reading of loathsome acts and then explicitly imagining fitting retributions. I could feel it degrading my character, so I stopped.

But I still liked the stuff that could actually put scenes in my mind, generate a physical response, get my heart racing, make me break a sweat.

That's because I am addicted to stress reactions, and I can use media as a trigger for an endogenous drug experience. In my case, the pathology is visible, but this dynamic underlies many relationships with fiction. It's only pathology if it goes too far.

A few years back, I was hospitalized with a stress reaction and diagnosed with post-traumatic stress disorder. When I began to write and perform autobiography, I soon found myself confronting one of the classic symptoms of PTSD -- a disorganized personal story. I had to go back and look at my experiences and walk through them one step at a time, establishing the connections.

The act of writing and reading these works proved tremendously therapeutic. Not only was I confronting my social anxieties and fear of crowds, I was finding out what my story actually was. And once I knew my story?

I could stop worrying about it. And because of that, violence is no longer a subject of primal interest for me. I no longer wish to deal with it as a central issue in my work. If it comes up, it comes up, but I'm not going to go looking for it at this point. I still have a taste for the old vino, but I'm more likely to reject a vicarious violent experience than accept one. I've come to recognize that they're actually hard on me, that they promote ambient levels of stress, and now prefer fairly low-key entertainment for the most part.

The place of violence in my writing has changed. In my current novel, yes, there are two fight scenes, but in both instances the protagonist is a chicken, and no humans are harmed. The central plot rarely involves raised voices, let alone thrown pillows. Or punches. I'm more interested in portraying things being built than broken. I still have some adventure fiction in me, but the idea that adventure = violence is being subjected to stress tests.

What I'm suggesting here is that rather than being a form of revealed reality, most violence in popular culture is a response to trauma and unprocessed rage and fear, and the more extreme the portrayal of violence, the deeper the likely wounds in both creator and audience. I'm suggesting that most portrayals of violence in popular culture reinforce the existing mental and social patterns, drawing the same graffiti over and over again, and it is only through great and painful effort that we can hope to approach works that are actually transformative, or at least have the merit of truth.

Too many writers are either powered by a slowly fading inchoate adolescent rage, or engaging in vicarious fantasies of potency, and they don't usually give us useful stories. Fun stories, entertaining stories. But are they helpful? Really?

What I'm saying is that if you are actually opposed to violence, don't promote it. Don't make the violence thrill. Blood in your eye just blurs your vision.
Posted by Sean Craven at 9:40 AM 2 comments: