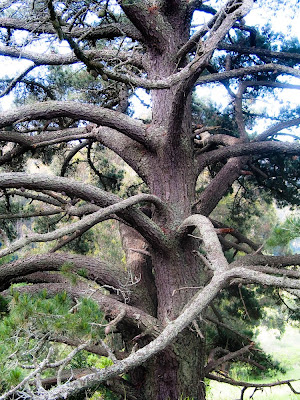 I've been going through it the last couple of years. I try not to turn this blog into a whinefest, but there are times when it helps me to get things out. Writing on my blog doesn't feel like talking to myself; it feels as if I'm conversing with a friend. So, buddy, here's what's going on...

My head's been getting worse. By this I refer to my being, well, a crazy person. I'd been on a slow but steady path of improvement for a very long time, but the last two years have seen things degenerate. This last winter and the current spring are giving me extra difficulties.

My insomnia has gotten worse. If I can get five hours of sleep a night, I'm okay. But lately I haven't been able to get that. I'm averaging three or four hours a night. That's still better than my worst, but it isn't good.

I've been spacey and irresponsible in ways that are totally new to me. Missing classes and appointments, forgetting things that I have to do, going to wrong buildings, etc. I mean, I thought I wasn't the kind of person who did those kinds of things, and here I am doing them.

And I've been finding myself just freezing for extended periods of time, sitting down at the computer, doing a quick web surf, and then realizing I've been doing it for hours. Or realizing that I've been walking back and forth between the living room and the kitchen for hours. Pulling out stacks of books and reading all the introductions and afterwards and none of the actual material. That kind of thing. It happens when I think about all the things I could be doing, all the things I should be doing, how lucky I am. How privileged.

I've been troubled by obsessive disquieting thoughts badly enough to lose sleep over them. Here's a sample -- imagine holding a steel tetrahedron between your teeth -- the taste of the metal, the smooth cold feel, the sense that it's harder than your teeth, the feeling of electricity where it touches your fillings. Bite down until your teeth break. Feel the splinters of tooth, taste the blood, and as you lay there in the dark, experience that bite over and over again.

That's a mild one.

There are times when I walk while I'm infuriated, slapping signs and kicking newspaper vending machines and muttering furiously. Every so often I'll get a strange look from someone in public, and I have to wonder if they've seen me during one of those little excursions. A pal of mine recently spotted me on the street while he was driving; he said I looked like someone you'd cross the street to avoid. At first I felt amused and complimented but hey. That's not really wholesome, you know? Behaving abberently in public is just not good.

I've been self-medicating with alcohol, and that isn't good, either. I swear off drinking alone, I stick to it for a while, something comes up that I know booze will help get me through, the booze helps, my prohibition loosens, eventually I get offensively drunk and swear off solitary drinking again. Lather, rinse, repeat. I'm not talking about daily drinking -- I couldn't fucking afford to be a real alcoholic -- but both my parents and both my grandfathers were alcoholics. I can't take drinking for granted, and I don't feel entirely under control of the situation.

No point in going into more detail. It's just not been good. And at the same time it has been good. I've gone through real creative breakthroughs during this time, I've found that there are times and places where I'm valued, where I have something real to contribute. The missus is convinced that it's because of the progress I've made with my art and writing -- that it's fear of success.

Right now I'm at a crucial point in my life. I've proven to myself that I've got what it takes as an artist and a writer -- but that's all I've got going for me. I need to find some way to make a living, and being crazy is not helping me here.

And a big part of what's going on is that I simply don't know how to live life on the most basic level. I actually tried to sign up for a basic life skills class last semester, but found out it was for developmentally disabled people... I shoulda taken it anyway. Let's face it, I'm just Rain Man with a vocabulary. Taxes? Job hunting? Savings? Jesus! I have no idea how people do that stuff. I am but a cork, bobbing in the current...

When I've read up on this stuff, the message I see over and over again is, "Seek professional help." I'm reluctant to do that. My previous experience with counseling and medication was almost entirely negative -- my shrink did turn me on to Robertson Davies, but that was it. The more analysis, the worse I felt, and the anti-depressant (Nortryptiline, if you're curious) did me no good at all. My counselor and consulting psychiatrist were terrified of/for me. If I hadn't been intimidated by the forms I had to fill out, I would have been committed. I still feel guilty about how depressed I made my shrink.

But things have changed since then. I'm nowhere near as bad off as I was at that age, even with my current troubles. And there have been a lot of advances in medication.

So I've decided to bite the bullet and investigate the possibility of getting back into some kind of therapy. I spoke to the missus about this, and she's started nosing around, bless her. She says there are a lot of free options around here. I don't know how I feel about medication -- I've heard some real horror stories about the adjustments people have had to make while figuring out their medicinal regimen, and the idea of suddenly turning into some kind of goddamned pharmaceutical werewolf is both chilling and not entirely impossible. But just having someone to talk to would make a difference.