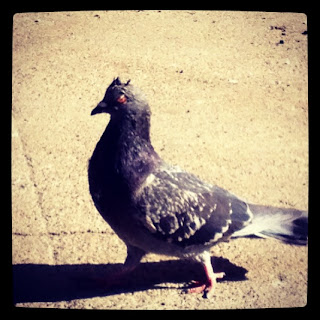 The neighborhood we were in was so punk the pigeons had mohawks.

So I had an interesting time on Sunday. Actually, I had a great time, but in a very odd way. Joe Clifford's got a new book on the way. It's the one he wrote first, a memoir called Junkie Love, and he wanted to shoot a promotional video for it. Last week he put out a call for thuggish types, and I decided to see if he could use me. I like Joe, I like seeing myself on video, I've always thought I'd make a good movie heavy, what the hell. I figured I'd put off my haircut for a few days to keep my looks as seedy as possible, and volunteered on that basis.

A year or so ago, maybe even as recently as six or eight months ago, I wouldn't have done it. But these days, I like socializing and meeting new people. My decision to really join the human race has paid off in unexpected fun. It used to be that going to any kind of real social occasion was painful for me, worse than physical violence, but things changed. Part of it is getting to be more comfortable with people, part of it is getting to be more comfortable with myself, part of it is realizing that when I feel miserably fearful and intimidated and on the verge of tearful flight, I probably come across as a stuck-up jerk, possible side-order of macho, and I'd rather be thought of as a nice guy.

I'm still figuring out how to present myself in public -- for instance, I have NO FUCKING IDEA what to say when someone asks me, "So, what do you do?" My compulsion to honesty makes this one a stone bitch. No matter what I say, I'll feel as though I'm either aggrandizing myself or poor-mouthing, and either way I'm trying to draw attention to myself, which is also the impression I give when I try and dodge the question. You know what? Next time I think I'll just say 'starving artist type,' and if they need any details, they can fucking ask.

So on St. Patrick's Day I took BART out, and went to look for an Alkane Hotel in the neighborhood of Sixth and Mission in San Francisco.

This was a bad neighborhood. Needles underfoot if you stepped off the main street. You could see people dying as they walked by; a substantial portion of the community was visibly malnourished, most of them older people. And among the obvious poor was a sprinkling of rock-and-roll types. As the man said, a cheap holiday in other people's misery. I found a place called the Keane Hotel, and hoped this was the place. I pulled out my book, and started to wait. And then after seeing four or five tiny, emaciated, elderly black people enter and leave, a lovely young blonde woman in her late teens or early twenties swept through the door.

Tall, clear skin, radiant with physical vigor, she did not belong here. She wore a punk uniform, brand new, leather and chrome and Docs. I used to have a lot of attitude about this kind of thing, but Establishment Punk serves a purpose for a lot of people, and it's actually part of my history and world, and they're nice kids. Sometimes they can tell I used to be the Only Mohawk in Town, and it's really adorable and how can you not like that? But the combination of the affluence necessary to assemble an outfit like that, to get the right tattoos, with the environment...

Her T-shirt screwed with my head. It was a Gits shirt. My old buddy Anthony introduced me to the Gits way back when. If you want real details, look it up, but here's the story I keep in my head for ready reference. The Gits were a band from Portland or Seattle, someplace up North, and they were pretty good. Their lead singer was murdered, it was ugly, and the investigation left people unsatisfied. Joan Jett took the lead for the band when they did a benefit concert to raise money for the investigation. I think the crime is still unsolved, but right now I'd rather eat a cockroach than check a fact.

So this young woman was wearing a brand-new-still-smells-like-silkscreening-T-shirt. A Gits T-shirt. And I was all, What the fuck does that mean? If it's deliberate, she's either actually cool or so cool she's horrible, and if it's an accident, that is one fucked-up omen.

Here's one of my life concepts; the transit book. I keep a paperback in my coat and another in my knapsack, to be read only when in transit or in waiting rooms or other such situations. So a book that might take three, four hours for me to plow right through might last me a couple of months, depending on the nature of my journeys.

As I loitered outside the Keane turning the yellow pages of the book from my jacket pocket, an old woman approached me and asked in a voice freighted with sad hope, "Is that the Bible?"

I said, "No," with a little more intensity than I'd intended. The book I'd found in my pocket was Naked Lunch, and I intuitively felt that there was nothing I could say or do at this point that wasn't going to be bad for that poor woman's equilibrium.

Since I wasn't sure I was in the right place, I got nervous, I got the jimmies, and I jumped and went looking for a payphone. On my way, I met Joe and the rest of the crew coming up the street toward me. Among others, Zarina Zabrisky showed up. I figured I'd finally get a chance to introduce myself, but no luck -- her shot was first, and she left when it was done. We passed like ships in broad daylight. This was typical of the afternoon. The shoot went with the startling smoothness and ease you get when people don't fuck up or fuck around, a rare and beautiful thing.

My role is dead minimal -- lead character tries to hassle me on the street and I shine him on -- and was done almost immediately, but when I went to leave, Joe asked me to stick around, so I did. I'm glad; we immediately adjourned to a dark alley, where I felt right at home. There was an older gentleman crouched in a nook formed by a wall and a rolling trash can. He was covered in coats, and his white beard hid his face, and he was eating something crunchy. Every once in a while, he'd try to say something. If it had just been me, I'd have tried to talk to him, but I didn't want to be his point of contact with the group.

The scene was making people nervous. I have to admit, I wish we'd brought a broom to sweep off the ground where the actor playing Joe lay while being faux-stomped. I'm a callous bastard, but by the end of the day, I was feeling a little concerned about people's emotional conditions. The people in the crew, I mean, not the sad folks around us. I didn't have room on the boat for them.

So it lightened the mood when the cops came up to us. It seems that the fake beating being lensed in the alley was disturbing some of the neighbors. Nobody said anything to us -- it seems they were standing out of sight, watching it happen, not getting involved. Our own little Kitty Genovese moment.

When I noticed the crunching, mumbling guy with the beard was gone, I went to check and see if he'd left anything behind for us. He did not disappoint. Behold. 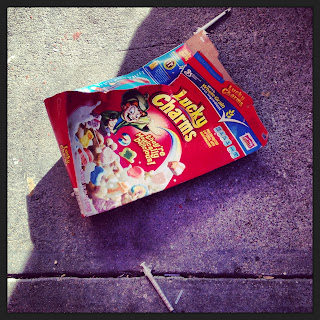 I am a wrong, bad man, because as soon as I saw this I really, truly hoped he'd picked Lucky Charms because it was St. Patrick's day, and then I tried to figure out whether I'd rather try and eat Lucky Charms on heroin or speed. ('Neither' is the correct answer. Those ain't eating drugs. Dude must have been hungry, or maybe those weren't his needles.)

Afterward, gentleman Joe treated us to Vietnamese food, and I heard the line of the day from the maitre 'd. This guy had a flamboyant, entertaining manner that strongly suggested he spent some of his leisure time in women's clothes, seating us with a "Young gentlemen, sit here, and over here the young lady," hands fluttering, and he was caught up in a drama. As best as I could decipher -- I have a hard time listening in restaurants, and his accent was heavy -- there was another customer in a wheelchair who had dined and dashed on him twice before. The maitre 'd showed me the bills -- he was very excited, and wanted an audience. It seems the delinquent  client's caretaker was embarrassed by the situation, and had wheeled him into a section of the restaurant far away from the door, where he wasn't going to be able to make a getaway.

I take particular pleasure in English as spoken by people who are eloquent in their own language and refuse to let anything get in the way of their ability to cleverly express themselves. We were elbow-deep in our meal when the maitre 'd approached me and told me, "No trouble, no trouble," he said and smiled. "I just show him the bill and he say sorry and he pay, see?" He showed me a folded bundle of bills, then set one hand on my arm and batted his eyes at me. "He was a young lady."