Further Art Developments and The Oaf Begins To Suspect He's Been Sold A Bill of Goods. 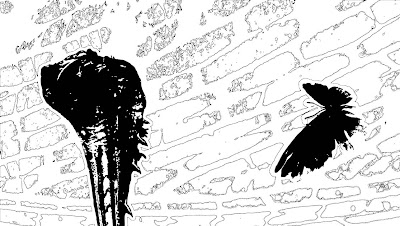 There's something vaguely familiar about this and I can't quite put my finger on it. I hope this isn't plagiarism.
So I've got two more pages filled in Swill, five to go. I wound up deciding that I needed some new subject matter to spark me up, so I went to The Bone Room. It was my intention to see if they had any trash or scraps to sell; it turns out they did, and I wound up blowing thirty bucks on fucked-up dead bugs.

Now I'd gone in hoping -- though knowing it was but hope -- that maybe I was the first artist they'd had in for a while asking after that kind of stuff. Well, this is the East Bay, with one of the world's highest concentrations of working artists. Of course they'd figured out how to commodify fucked-up dead bugs.

But they had another surprise for me. I'd brought in one of my presentation portfolios for The Bonelands in case I needed proof that I was an artist. Well, it turns out that they're expanding and that they want to have a small gallery as an adjunct to their store. So I was able to drop off a portfolio with them well in advance of the new space opening... we shall see.

The piece above is the first to come out of the insect scans and it's going to be the centerfold for Swill if it doesn't turn out to be plagiarism (it really seems familiar -- maybe I saw it in a dream). I figured out a very nice trick that gives me a lot more flexibility -- by going back and forth between Illustrator and Photoshop I can...

Shit. You know what layers are, right? By keeping the three elements of the composition above on three different layers in the Photoshop file, I was able to toggle layers off and on so as to import each element seperately to be Live Traced onto seperate layers in Illustrator.

I need to figure out how to do real tutorials, with screen grabs and all. I wind up feeling like these little reports don't mean anything to anybody -- I need to beef them up if they're going to provide useful information. Pull out the mike, that kind of shit.

Lemme put you into my head. Maybe it's just me, maybe this is something a lot of people have experienced. But ever since I was a sprat I have been given this vague half-formed yet tremendously potent feeling that rock music meant something. That on some level, in some way, it had both power and purpose.

Part of this had to do with the time during which I was raised. I was born in 1964, was in San Francisco for the Summer of Love, listened to Sgt. Pepper's every day and saw Yellow Submarine in the theater when it was first released. Rock and roll was inextricably connected with color and pageant.

I think superheroes had something to do with it, too. When someone puts on a costume, they take on an identity and the powers that go with it. It was the image of the other -- and believe me, I was the other -- as a figure of power and respect.

And so grew an illusion, one I have only recently grown aware of. The feeling that there was, as I said, something significant about rock. That there was a golden age, a lost continent, a wild planet of rock, that the bands were agents of this otherworldly realm.

This wasn't by any means a conscious thing. I just would be exposed to rock and part of me would tip back and go, "Woo!"

I wonder how many more choice nuggets of idiocy I have lurking around in my noggin... I am forty-five fucking years old and it is just now dawning on me that rock and roll is a sleazy shitty business, but not in a romanticized way. Rather, in the same slovenly suckfish fashion as any other.

I'm pretty sure they fight crime.

The first Roxy Music album is swell pop. Some of my favorite. Really great stuff, clearly ahead of its time. Et cetera, et cetera. If you haven't been bored shitless listening to people talking about early Roxy Music, then go get some. This one and For Your Pleasure should see you through the night.

But here's part of my problem. See, when I watch people on stage, I don't have more fun if the performers are dressed like silly-assed sons of bitches. It would never dawn on me that putting on a fool suit would be something you did out of showmanship.

Let me put it this way; I can hardly stand to look at these guys. If I had to watch them perform I'd spend the whole time cringing in embarassment for them, so there's no way they show up on stage like that. They only dress that way because they're in the Justice League.

I dunno. It's totally retarded, but it still kind of hit me on some level. Rock is just a business, virtually none of it is of any particular musical interest, most performers are livestock from the neck up and the ears in and the majority of those who aren't fools are exquisitely developed assholes.

It's just another career choice -- listen to the lyrics. Mostly they sing about fuckin', but inbetween they just sing about being rockstars. Fuck a rockstar who sings about being a rockstar. Fuck rockstars, period. Rockstars killed rockers.

I didn't really know I had the illusion but now that it's vanished on me, I want it back.

I want that kingdom in the garage and beneath the sea of green. I want Rocktopia.
Posted by Sean Craven at 5:21 PM 3 comments:

Mildly Petulant, No Sign Of Frenzy: And Some Thoughts On The Upcoming Novel 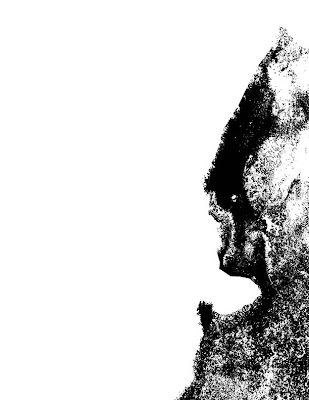 Here's an example of the tailpieces I've been doing for Swill. There are one or two that need to be replaced but they're pretty much done. I think they add something to the sauce. 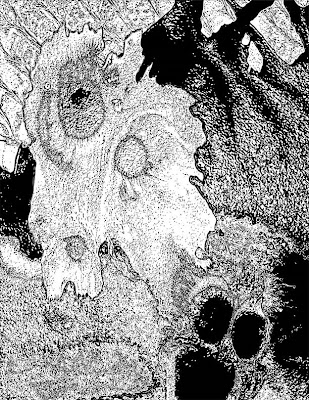 This is just crazy, isn't it? I've recently the full run of Weirdo magazine -- R. Crumb's long-running Mad-modeled humor anthology and a high point of Western culture, you slaggardly gobnards, I'd start pimping it but I'd get out names like Peter Bagge and Aline Kominsky-Crumb and then wake up in the middle of the night going, "Oh, shit, what about Elinor Norflus? How could I forget about Elinor Norflus?" -- but the qualities that give this one a Wierdo feel are totally the product of an Illustrator algorithm. I had nothing to do with those scratchy little lines -- I just picked them out.
Before I start barging around today's blog post, I've got a confession to make. I've been sucking lately. Doing a lot of work that has not proven to be anything I'd care to show to the public.

I'm going to try something different, something involving self-promotion. I'm going to go to a local store that sells bones and dried insects and stuffed animals and so on and ask them to sell me a bunch of their detritus. I'll bring a presentation folder to leave with them and a portfolio so I can show them my paleo art.

I will ask them if they'd be willing to sell me a bunch of detritus. The broken, the shop-worn, the stray bits and pieces. Trash I can scan in on my new scanner. In fact, now that I think of it I'm going to try and scan in as many different objects and so on as I can. Today I go to get the glass for my scanner.

Because I need to bust out. There's so much that's already been done on the magazine and here I am freezing up. I need to break free of this crap and start cranking out the pages. Bim bam boom. So a fresh and crazy dose of source material should hopefully get me going again. I'll call it a different series and do more of the Rorschach Dreams when they come to me. Right now obeying those rules is producing bad work.

I've also been thinking a lot about volume two of the novel. It's a bit problematic at this stage and here's why.

Right now, what I've got for the second and third volumes of the novel is as follows. Third volume, an outline and a rough draft of the beginning.

For the second volume, the one I need to work on next, I've got a number of scenes written along with the rough draft of the climax. So I know where I'm going and I know roughly what I need to do to get there. This book needs to provide the linkage between what I've done and what I know for sure I'm going to do.

It's all a mess right now. I've decided to try experimenting with conventional, structured outlining techniques I learned in multimedia courses.

I'm going to figure out each plot line, figure out exactly what needs to happen to bring them to their proper stage of ferment by the end of the book, and then look at all those lists together and start weaving them. Put 'em on post-it notes, clear off some wall space and use filing cards and pushpins...

I hope it works.

Email ThisBlogThis!Share to TwitterShare to FacebookShare to Pinterest
Labels: art, Illustrator, The Boneland Rovers, The Ghost Rockers, The Songs Of Stray Souls, writing

A Failed Experiment Is Not The Product Of Wasted Time. 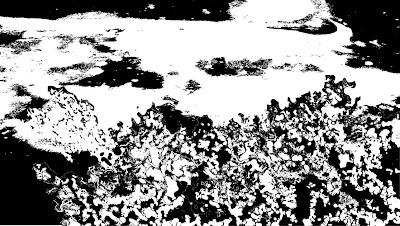