Hela Thor or Waiting For The Great Pumpkin 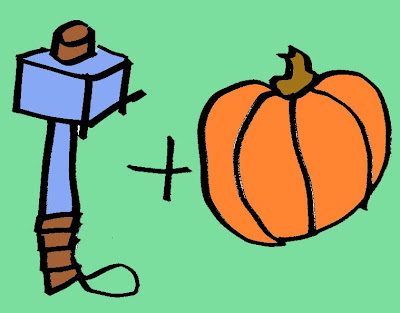 So the old man has a taste for movies with swordplay and gleaming armor and so on -- we wind up seeing things like Beowulf and 300 and Clash of the Titans, so it's just a matter of time before I wind up at a Tom of Finland retrospective with my father. That will not be a proud day.

He took my sister, my nieces, and I to see Thor, and we all loved it. We sat down, tipped our heads back, and laughed like a pack of fucking hyenas. I haven't laughed out loud at a non-comedy in some time. It's a good thing the people who made the movie weren't there. They would have hated us.

It's hard to say exactly what it was that infused this meatheaded pec-fest with the comic spirit, but it seems to arise from the details. They went to the trouble to really pay attention to the little things, and get every single possible detail wrong. For instance, the Celtic knotwork on Mjolnir, or Thor's... can it even be called an accent?

I once knew a woman for two years before I worked up the nerve to ask about her accent. It turns out she was Scottish, but had spent a long time in Denmark. Thor's accent was kind of like that, but more Dutch, somehow. In the liquor store on Dwight, they have Grape flavored blunts, but they also have Purple flavored blunts. Thor's accent is an accent the way Purple is a flavor. It's confusing in a way that makes you want to accuse someone of racism, but you don't know who or why.

Speaking of which, the plodding ugliness of the design was fucking relentless. Hope you like masses of gold. They got plenty. Pretty much everything's gold, except for Bifrost, the rainbow bridge, which emanated distinct Pottery Barn vibes, despite the steampunk raygun grafted to its front end.

(I'm not clear on how that worked. People got shot through the raygun or some damned thing. It was too stupid to bother understanding.)

Early in the movie, they had a scene where Thor pitches a hissy-fit and tips over some tables at a banquet, and all these pumpkins roll off the tables and down the golden steps. Spoiler Alert! You know how deluxe things are in Asgard? They got orange pumpkins -- and white ones too!

"Oh, Mighty Thor -- y'all eat those things, or are they just there for decoration?"

Now if I were to offer a genuine critique, I'd say something about how Thor's story here is based on a twenty-first century revamp of the character that eliminated the dramatic elements connecting him to the real world, and how the lack of grounding makes it impossible...

Oh, come on. If this were a real critique, I'd have brought up Kenneth Branagh's earlier films, and then staggered around the room, colliding off the furniture while clutching my scalp and screaming, "What the fuck? What the fuck?"

And that gives a bad impression.

Look, it's a crappy movie. When you spend this much money on a film and you can't even make it fucking look pretty, it's a sad state of affairs, and when a genuine talent is presiding over the shambles, it's sad enough to start seeming funny.

And then I remember the pumpkins, and I have to admit, it was a terrible movie and I loved it.
Posted by Sean Craven at 4:18 PM 2 comments: