Out Of The Egg 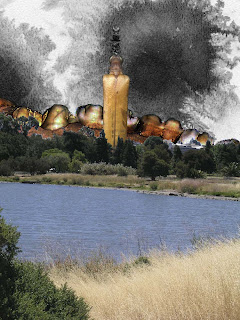 So these two designs need to be rendered, and then I'm down to one illustration and Swill's ready. I'm going to be out looking for that last composition to day. 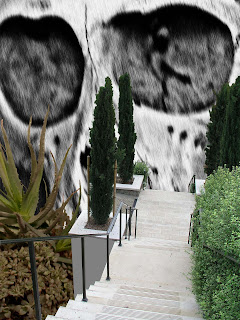 The fun part of this process is doing the grayscale renderings. The images in my head look completely different than these designs. Detail lost and gained, the use of limited tone to suggest atmospheric perspective, different areas of light and dark -- these only suggest the final illustrations.

Some time in my thirties, I began developing a bad postural habit. I have a tendency to hold my neck bent so that my head is thrust forward. This has caused a bit of spinal degeneration, and it isn't a particularly becoming habit. But over the past couple of years, my posture has been changing. An improvement in my opinion of myself has been accompanied by a tendency to hold my head up, and the shift in posture adds an element of feedback -- my body feels prouder.

Of course, this change has been accompanied by initially-frightening experiences of numbness, prickling, and shooting pains in my arms and hands. Thanks a lot, body. Cute metaphor.

It's been an interesting few days. I've done a reading and attended others, sent the novel out to Tor Books and a fistful of interested parties --


IF YOU'RE A PAL OR COHORT AND YOU WANT TO LOOK AT THE NOVEL, FEEL FREE TO SEND ME A REQUEST. THERE WILL BE NO BOOK REPORT REQUIRED, AND YOU AREN'T OBLIGATED TO FINISH IT.

Anyway, on with the story. I sent the novel out, I participated in a video shoot publicizing Lip Service West (I've been meaning to blog about their extensive collection of videos -- here are the folks with whom I've appeared), and I was invited to participate in what looks to be an entertaining spite reading. Time to come up with five hundred words of horror from my life! That should be easy.

And get this -- the missus tracked down a bargain class in film acting. It starts tonight. It actually looks credible. I'll tell you more later.

Life does feel different now that the novel is out in the world. "It feels weird," I told the missus. "I could get hit by a car now, and my business would still keep going. I feel immortal in a yard-sale kind of way." It's not perfect, it's got at least one major going-over to go. But.

I've never had a graduation, never had a wedding, never had any of the big ceremonies that state to a person and their society that they have come of age. And my process of maturation has been much more complex and difficult than that faced by many people, and it's nowhere near done.

But there's a mediaeval concept that's weighed me down for years, and I've finally got the weight off of me. It used to be that the arts were taught through a system of apprenticeship, and that's where we get our word 'masterpiece.' A person's masterpiece is not their finest creation, or a work of enduring cultural significance.

It is, rather, the work that marks the change in status from journeyman to master -- from an advanced student to a practitioner.

I now have a body of work in the visual arts that is ready to take to market, and I have a novel that is in the market, and I am beginning to get a reputation for my performance work. My masterpieces are behind me.

I am now a working artist. I ain't getting paid yet, but now I'm in a position to change that. And I'm working on it.

My blog and online presence are going to undergo a sea change in the near future. I'll be focusing my creative energies on creating web-friendly work intended to garner me an audience rather than friends. If my audience turns out to be anywhere near as good as my friends, I'm set.

But folks? I'll be taking classes here and there for the rest of my life, because learning is one of the central pillars of my life. But I'm not a student anymore.

I'm different than I was even a couple of months ago. I feel confident and self-contained in crowds and social situations. Quentin Crisp once wrote, "Artists are a bunch of hooligans unable to live on their fair share of attention," and damn if that is not the case with me -- but if I conduct myself properly, I get the undue attention I so desperately crave. I'm known. I have a reputation and it's growing, and this makes me feel more real, more solid. Sooner or later I'll really have a sense of self-worth and I won't need that nonsense, but until then I'll be able to earn enough of it to get me by.

I'm involved in the world, engaged. In the short run I'm still more isolated than I'd like, but I am not alone. I'm part of a number of communities, and I'm valued. I'm engaged. And if I keep going, soon I'll be engaged in my own business the way I used to engage myself in work or school.

I never imagined myself making this statement in a way that wasn't essentially self-deprecating. But here it is.