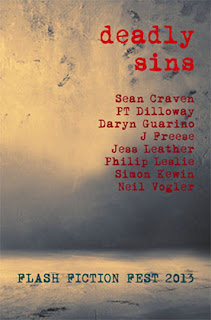 Sign Up Here To Get Free Fiction Throughout November!

So! Starting on Friday, my (oh, my goodness) publisher, December House, is releasing this year's Flash Fiction Festival -- Deadly Sins, a collection of stories on the subject of Lovecraftian themes in a Steampunk setting. My character is a vampire bounty-hunter working for Azathoth, but despite the love they share, she's starting to think there's something wrong with his agenda -- lethally wrong for the human race. Unless she wants to live off of ichor for the rest of eternity, she's got to face down not only her lover, but all the other horrors out of space and time. I guess with all the tentacle stuff it's kind of anime too. What do they call it? Hentai? Yeah, like that.

It was Harry Potter when I wrote it the first time, but they made me fix it better except I had to take out the pictures because you could tell who everyone was, because they were very realistic and very canon both.


Okay, just to be clear? I'm joking. This is a collection of short-short stories on the theme of the Seven Deadly Sins. P.T. Dilloway and Neil Vogler. the original team from last year, are in there along with a number of new writers.

So here's the release schedule for my stories, along with a sample. Forgive the typographical issues; I cut & paste from Word.

Her request bothered him. It was as much about getting him to do something as what he was going to do. Aaron and Caroline hadn’t been together long, but he could already sense the lines of contest in the relationship, and he wasn’t quite at ease with them.

The words of men were strong as iron, bright as brass, when
a brush stroked paper it rang like a
hammer striking sparks from a new sword.

Each spark a word, each word a picture, each picture
held its thousand words.
It was spring between wars, they were
drunk on peace, and kept their beautiful
words within a drunk man’s reach.

You, who are beautiful as a green river with golden banks, you who are as mighty as a dragon scaled in coins, you who are kingdom itself, industry at your right hand and the wrath of war at your left, enthroned on the church and cushioned in pleasures;

I might make it. I might not. Either way, my wife was going to come home to my emaciated body stretched out in bed. She would ask, “What happened to him?” and she would be informed, “Sometimes they just stop working.”

Would this make Carol one of those Munchausen’s people? Probably not: they wanted attention, and Carol just wanted five minutes of quiet.

Christ, and will you look at that. That dude might be the most stunning world-class worthless piece of egregious shit you have ever seen. Texting while riding a bike no-handed on the sidewalk, flip-flops and no shirt, blonde dreads halfway down his back, sporting a fucking NO FEAR tattoo that needs to be rendered ironic. He is going to sail right through that red light, isn’t he?

My wife regrets that she has to make due with a small quivering wire-haired animal with halitosis when there is something larger with softer fur available just on the other side of her spouse. If she goes to bed before I do, sometimes she will sequester both dogs on the starboard side of the bed, and hope that when I come to bed in the dark, I will not notice that Laszlo is missing, or, if I do, I will dismiss it as something of no concern. Her crude ploys are of no use, and provoke pity rather than frustration.

On Becoming A Commercial Novelist 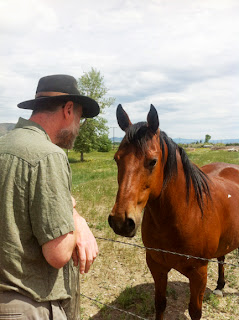 Fiction intended to make money. And in today's literary culture, that means conventional storytelling -- providing vicarious experience, a guided exercise in let's-pretend, characters that the reader either identifies with or finds amusing, a sense of rising action and immersion in an imaginary world, and so on. Dramatic fiction, in other words.

This is a juvenile activity on the parts of both the audience and the creator. The highest forms of literary expression deal with literary issues, not those of an imagined life. This kind of work can be pure hell for those of us who can sustain ourselves on the beauty of prose separate from any other concern. The marketplace used to be a snakepit, but has since been thrown into utter chaos.

I don't read fiction for pleasure very often. Since I don't read, how do I put myself in relationship to the audience? (For those who don't know, it's not like I'm unread. I was a compulsive reader up until I learned how to write properly, and went through a minimum of a book a day ranging up to five for most of my life. Yes, sometimes I read at freak speeds. I have one of those brains.)

I hate the idea that I might write down to my audience. I feel a little woozy and hubristic at the idea of writing for an audience.

I have no audience. What the hell am I thinking? I write stuff that makes demands on the reader. Nobody wants that crap.

And these days I look down on a lot of fiction. I mean, I read people like Steinbeck and Fitzgerald (to name a couple of writers who are too dead to be offended) and get irritated and judgmental. If I've developed a distaste for the form, how can I hope to do it well?

And there is nothing about the transmission of fiction that leaves me feeling good. I love bookstores and bookstore owners, but once you've seen a dumpster full of books or a row of carts filled with shelf-damaged books returned without payment from chain bookstores. I'd always dreamed of e-books, but now that they're here, I regard them as ugly ecological and labor disasters, part of the internet company store that is helping strip the planet bare as fast as possible while impoverishing as many as possible.

And what am I going to do, go on and do the same kind of project over and over just because I can do it? What about higher artistic goals?

I have wanted to be a writer since I was a kid. Everyone around me has regarded me as a nascent writer my whole life. And now I actually have the goods. I can write a deep, solid novel in less than a year, and I have a backlog of ideas that could fill my life if I never came up with anything else.

And I still love the form. I just am not in the audience anymore. The act of writing is terrific. The skill of projecting myself into another writer's work has been turned on itself, and the results are a hell of a lot of fun. I get more escapist pleasure out of writing than I ever did from reading, and the sense of being in control of the work resonates through my life, and makes me a stronger, happier, more confident person. The pleasure I take in writing imbues itself into the work. This isn't a masturbatory pleasure. It is a means of engaging with the world. I cannot give pleasure unless I experience it. The bargain we work with the world is more complex than I'll ever understand.

Reading fiction is a good hobby. It's one of those things like athletics that has a cascade of beneficial secondary effects. It is actually good for people. And the type of fiction I write -- dense, evocative, intellectually stimulating and demanding, highly emotional, rich in sensory detail -- really gives the brain a workout. I've seen enough responses to my art to know it works for the right audience. It's good for people and it makes them happy.

I do have an audience. The are personally connected with me at this point, and there aren't many of them. But the response to my work has been encouraging. It is going to take years more before I understand what the actual scope of my situation is, and it may never actually settle into a predictable pattern. But what I have seen so far is the growth of a...  the visual in my mind is of a slender yellow coral that sends out branches at ninety degree angles, covered with a green mist of algae. It branches and branches.

It may form a reef.

I have a publisher. I have the skills. I enjoy the work, and I am good at it. Why fight? Why not see how far it can go?

I'm going to devote myself to commercial fiction for at least three novels before I make up my mind where to go next. Being a novelist alone isn't enough of a life, but if it can be a rewarding part of my life, then yeah. Why not? I have performance and visual art as arenas for my pretension. I can afford to do some middle-brow work for a while.

So. I've got Helping Henry in the works, then my big space opera, and then the next Henry.

And then we shall see. I have a graphic novel project I want to do, and I've been feeling weird about not doing paleo-art. But for the next year or two, I'm going to be a dedicated commercial novelist.