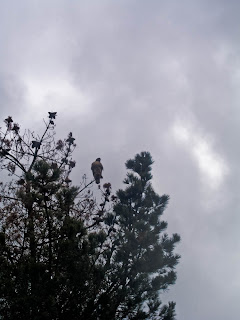 I'm pretty sure this is a red-tailed hawk, one of the more visible of our local predators.

For those with an interest, here's the current state of my ongoing crisis.

There is a cycle that I've been through a few times on the internet, and it's one I kind of hate. I go into a community when I'm in good spirits, find a few friends, have a decent time, and then when I hit a seasonal mood plunge, I withdraw so as to not spread my bile, and feel odd about returning later.

Right now, I'm going through one of those seasonal bad moods. And I'm supposed to be promoting my Henry stories, currently being released from December House. Here's the first story! Here's today's story! Read them all! As the missus was overheard saying to a friend of hers, "It's weird. They aren't dark at all."

My current mood is on the dark side, but in a sort of good-ish way.

In my current state, normally I'd be prone to major mood swings every couple of days. The kind of thing where if the missus wanted to have me put into care for a while, she could. This year I'm having a much easier time. I've been having wonderful responses from my counseling and personal practices, and as a result I'm much more stable.

The disturbing part of this is that I'm getting a clearer view of the physical and involuntary aspects of my condition, and it's a little spooky. My brain really is weird.

The first major insight was realizing that my mood swings weren't so much chemical as neurological. When they hit, I can go from feeling absolutely wonderful to being overwhelmed by angry misery in seconds. People who have seen the process happen say it's very visible. And it's always felt to me as though someone turned on a tap in my brain and filled my body with unhappiness.

But yesterday morning, as I lay in bed trying to drowse, I was able to pay attention to one of my mood swings as it took hold.

At first, I was worried that I'd left a door open in the studio, and rain might get on the carpet. The contemplation of this unlikelihood (I'd shut the door, I always shut the fucking door) made my heart rate accelerate, and I had to consciously keep from hyperventilating.

So I did what I do these days. I told myself that my panic was more important than anything that caused it, and that calming down was my number one priority. I explained that I had, in fact, shut the damned door, and that my niggling fear of failure was an affectation. I said that even if I did leave the door open and the missus yelled at me, it was still more important for me to calm down and rest now and blow it off later.

So I settled down.

And within minutes, I was thinking about someone who has treated me poorly, and I was starting to get upset about that. But that kind of personal anger is atypical of me -- and it felt as though the emotional upset itself was sniffing around for something that would trigger a panic reaction.

I think that's what was actually happening. And when I addressed that part of myself in words, it backed down.

Habits, including emotional habits, are actually circuits of linked neurons in the brain. The ways they form and are broken are essentially physiological -- the behavioral tools used to confront these problems are just a means to an end.

The thing you need to remember about those circuits is that they actually are living things. And they are motivated. They want to fire. They want to function!

And yesterday morning, I sensed that desire. I realized that my emotions of fear, anger, and grief are linked, and they are used to being used all together in a massive, overwhelming display of force. These circuits were formed in childhood and reinforced throughout adulthood and now I have a demon in my head.

This is a situation that can be addressed.

Recognizing this emotional state for what it is, I can avoid allowing all of myself to get caught up in it. It is possible for part of me to stand to one side and say, "Go on, do your thing, you miserable bastard, let me know when you're done."

By neither feeding into the emotions nor denying them, the stress that serves to reinforce the pattern is diminished. I've been able to do that over the past day, and I strongly suspect that this particular pattern of reaction will diminish radically over time, possibly becoming no more than a nuisance.

The other big realization is...

Okay. There is one area of your brain that is used to handle issues of self-care and self-awareness. There is another that deals with the care and awareness of others.

The future self -- the self that will be inhabiting your body tomorrow?

The brain files that self with the other people.

Very interesting, and it certainly would explain a lot -- like why risk-takers are so frequently assholes.

And I have no capacity to care for my future self at all. None.

There is a whole slew of activities ranging from filling out forms to keeping in touch with friends where I have failed almost entirely throughout my life. Anything involving long-term planning is right out of the question.

I've developed a lot of clever work-arounds for this, but it's become clear that a basic human function is almost entirely undeveloped in my tiny, box-shaped cranium.

But again, in theory, this should be a correctable problem.

I need to find some things that I can do for myself that generate solid results for minimum effort in a short span of time. I'm not asking for miracles, just simple activities that deliver a reward my brain will recognize. Maybe sketching and practicing music regularly, or getting my food situation organized, or cleaning my workspace and re-organizing it for ease of use.

What can I do for my future self?

Right now, this kind of work is changing me on a daily basis. My self-image is fluid to a degree I'd never have previously imagined. I don't know who I am, what I can do, where I belong, or what I want.

And I'm having to begin presenting myself to the public in a crusty state both over-ripe and half-formed. I'm not ready, but that has nothing to do with the way the world works.

I guess I'll always be a work in progress.
Posted by Sean Craven at 8:54 AM 2 comments:

Birds And Other Dinosaurs 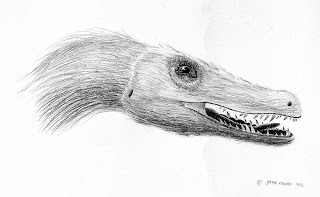 If I don't start drawing again, I'm going out of my mind. Plus, I'm out of the loop with my paleo-pals, which sucks.


So my publisher and I have agreed that it might be nice to have a little background material on the Henry stories. Normally my work is meticulously planned and executed, but these were whipped out at a speed that basically demanded automatic writing. I’m still surprised by some of what came out, and it’ll be interesting to try and figure out what I was trying to get at. While these aren’t hard science fiction by any stretch of the imagination – they are fairy tales with a technical gloss – they still reflect a lot of the preoccupations of an armchair naturalist.

In Dinosaurs, eleven-year-old Morrie Flores ‘dinosaurs’ a chicken. The idea isn’t new or original. I first read it in Carnosaur, by Harry Adams Knight, Michael Crichton riffed on it in Jurassic Park, and more recently John Horner discussed it in a TED talk.

The idea is that certain physical traits, like vestigial tails in humans, or legs in whales and dolphins, are the result of archaic chromosomes being activated. If you were locate the specific genes that guided the growth of particular physical characteristics possessed by ancestors of the animal in question, you could activate them and produce an animal that looked more like one of its ancestors.

In theory, this could be done. They have grown teeth from chicken tissue – in one case, by implanting it into the jaw of a mouse.

Not descended from dinosaurs, but actual, real, little dinosaurs bopping around your lawn and screaming obscenities at one another. Dinosaurs aren’t extinct; there are twice as many kinds of living dinosaur as there are mammalian species. They wake you up in the morning, startle you at night, and every so often, a cassowary or ostrich will kick the life out of some poor bastard.

Dinosaurs are also tasty little devils, both grown and unborn.

The bird/dinosaur connection has been a great source of pleasure in my life. I’ve been hiking regularly with my father for quite a while now, and he’s a birder. As a result of our discussions on our nature observations and my paleontological readings, we’ve both become intuitively aware that these animals are a direct connection with deep time.

Of course, in Henry’s story Dinosaurs, the dinosaur in question talks. That’s an entirely different subject, and I’ll talk about that in a future episode.