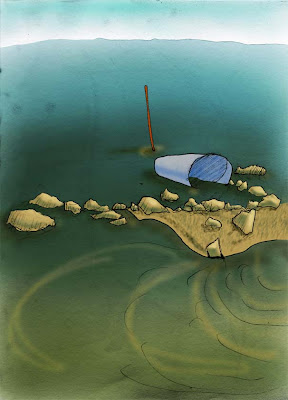 This last spring, my pal Deborah and I started sketching outdoors. Here's a blog post she did on the subject. (Yeah, that's me in the bottom photo, and yeah, my back gave me merry hell for a good three weeks after I sat on the ground like that.)

At first I felt as though I'd lost all my drawing abilities and they were never to return, but I've had that feeling plenty of times in the past and it's nothing that hard work can't cure.

Finally, this last time I got in a couple of halfway-decent bits. Nothing impressive, but it's nice to know the old muscles are there. My copy of Painter is screwed up so I had to do this one in Photoshop -- it was fun.

Sorry to have vanished like that. I've been doing some very hard cognitive work. See, when I came back from Taos Toolbox, I was on fire, writing thousands and thousands of words a day, totally re-working the novel from the ground up. I was trashing everything that slowed the reader down, inserting interconnections between sub-plots, really seeing the whole thing at one time.

There was a faint concern -- a paranoia, merely -- that by taking out all the richly observed autobiographical material, I was cutting the guts out of my novel and reducing it to a potboiler mostly notable for the degenerate nature of its lurid subject matter.

But this was but the faintest whisper of doubt. I knew I was on the right track for the first time.

Until I got in my first critique on the new material. One person said it was the best I'd done so far, hands down.

The other person hated it. I mean, it was as if the lead character in the book was a friend of hers, and I'd killed him. She was actually upset with me.

This was very interesting. First off, it totally played up to my worries. And secondly, she said that the character came off as being someone who was batshit crazy rather than someone who was coping with mental illness.

Interestingly, all the material I cut consisted of fairly unpleasant episodes of mental illness. And yet removing them threw the balance of the story off in ways I hadn't expected.

The woman who was bothered by my revisions is the least experienced writer I work with, and she was reacting emotionally rather than intellectually, which was unusual for her. She wasn't able to say exactly what I had done that wrecked things for her -- only the effect that it had on her.

This may have had to do with the fact that she's also the least experienced reader I work with. She and I met in class, hit it off, and wound up becoming friends. She was a non-reader, former non-writer who was trying out writing for personal reasons. While she's since started reading for pleasure, it's still a new thing in her life -- which made her strong reaction that much more interesting to me. I'll be honest. It messed with my head -- I was convinced I sucked.

The next set of reviews was very positive, and that came as a great relief. But one person thought the pace was too rushed.

So I thought. And thought. Lay in bed in the dark and thought, thought while I washed potatoes. And then something Nancy Kress had mentioned at Taos Toolbox came to mind. I won't go into it in detail -- I suggest you attend next year -- but the basic idea is that there are aspects of fiction that you have to pay the reader to plow through. And you earn the cash to do that by giving the reader dialog.

The draft of the novel in questions started off with six pages before there's any dialog.

I also remembered something my sister had said. She was in conversation with the missus.

The missus said, "It's really a compelling read (yes, she said that for real), but it's so disturbing."

"Well, it puts you right inside Sean's head." My sister turned to me. "You know, your head is a really shitty place."

Those first six pages took place inside the protagonist's head. Right, right, right. He doesn't like himself, the reader gets sick of him fast. What makes the reader like Matt? Seeing him interact with his friends.

So I went back and inserted an extensive dialog section between the protagonist and his best friend, resubmitted it, and it passed. There is some grumbling that the pace might still be too fast at first, but frankly? I think 'you could slow down a little at the start' is the kind of advice an editor would love to give an author.

I can't tell you how it felt to be able to do that. To get a complaint, analyze the work, and arrive at a successful solution to the creative problem. I felt like a regular pro there. Thank you, Taos Toolbox!

So the first chapter is nearing completion. I mailed it off to the hon. Mr. Richard Talleywhacker for one last set of grammar and punctuation edits, and then I am through with it until it's been through a brace of agents, damn their eyes.

Thing is, is that I had to go back and do a major rewrite on that chapter even after it passed muster. I realized that my lead character had an out-0f-body experience in the first chapter and nowhere else in the book. So I had to fix that.

I'm at the point where there are fine details of worldbuilding that are now becoming very important. I just spent three days where, while I did plenty of other stuff, the bulk of my energy was spent imagining the topography of my imaginary world. I thought I'd already nailed it, but the current plotting is tight enough to demand new levels of detail in order to maintain continuity. I have been busting my nuts linking everything, making everything make sense and be consistent. I'm operating at a new level, and it is a pain in the bee-hind.

I mean, dang. This stuff is hard. But it's paying off. On Monday, the dude I work with who just got signed by Donald Maass said that this was the first time in all the years he's been working with me that the voice of the novel shows up on the very first page. I knew what he meant, and I was damned glad to hear it.

So among other things, I've been poddling about with the start of a project that hasn't been worth being anything but secret up until now. I'll tell you about it soon.
Posted by Sean Craven at 6:58 PM 3 comments: