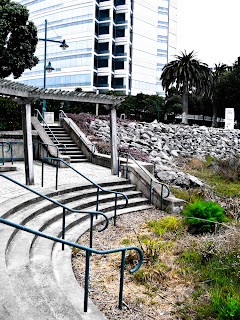 The main reason I haven't been posting much lately is that my life has grown very difficult to talk about. There is no brief description, and the details are all dramatic. Hinting at shit is odious, and telling all is impossible and disastrous.

I am not used to a life that's complicated enough so that you have to compartmentalize.

While there have been a lot of upheavals in my life recently, I have been more emotionally stable and genuinely happy in the last six months than at any other time in my life. I am developing a solid, positive image of myself, and my levels of self-care have improved dramatically...

But they've recently taken a dip. So right now, I'm trying to find ways of giving things a boost.
And blogging when I don't have a good post is something that's actually good for me in the long run.

Like it or not, this blog is as much a journal as anything else, and if I hold back on what I write because I'm afraid of looking like a wimp or a braggart or a sot or a lunatic or a regular old boring no-talent hump?

Then I won't know what mood I was in on that date, in that year. And I've found it tremendously helpful to be able to track myself through the blog. "Oh, I was in exactly the same miserable state for different reasons the last four years in a row. I'm just gonna be miserable for a while, and it's no big deal."

But for the record, most of this last long blank spot on my blog has been spent in giddy self-discovery. Between counseling, a wider experience of life, and seeing myself on video? It turns out all that crap people say about me is true. And I haven't been blogging because if you talk that stuff about yourself, it turns out you're an asshole.

I will say this.

I have been engaging with the world on the wrong terms. For someone like me to be shy, and reticent, and self-deprecating? It tends to come off as stuck-up. I have more of an impact on the people around me than I really understood, and if I'm going to live up to my own standards, I'm going to have to learn to be more friendly, social, and open.

I am also facing a situation where on one hand, people are saying, "When you get rich," as though is a fated thing, and others are saying, "You know, the government earmarks money for people like you. There is no shame in going on disability!"

Well, actually, there is. The process has been made intentionally humiliating, and there are no shortage of people to give you attitude about not being a productive member of society.

So I am trying to introduce myself to the world as a legitimate figure of the arts, while worrying about whether or not I should apply for disability, whether I deserve it, whether I can get it, and whether or not putting myself through the process might actually damage me, delicate hothouse flower that I am.

What has been pointed out to me, is that the characteristics that can suit someone for a public, creative life can make them difficult to employ. That the two things are not contradictory.

And while that is going on... You know that scene in The Big Lebowski where Donnie gets a strike when he's bowling, and as he walks away from the lane, he grins and does this little hand thing and says, "I'm throwing rocks tonight!" That's what the writing feels like.

That's the thing. The art and the writing are great. But I'm a work in transition, and things have been rocky. So that's why I'm blogging to day.

Just trying to return to a state of engagement.