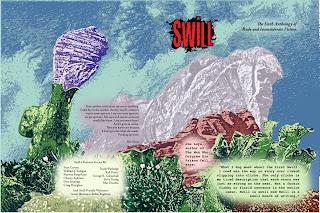 Swill 5 came out in December of 2010. Swill 6 is finally done. Why so late? I'm the problem, I've always been the problem, and I'll always be the problem. If you've been following the blog, you know the soap-opera, and if you haven't? My life is a fucking soap opera! For Christ's sake, it's a miracle I'm not dead or locked up. On the other hand, in all modesty, when I was apologizing to Rob the other evening, he said, "Well, it is a fucking work of art."

On the cover, we have a much-beloved and very kind blurb from Joe Loya, and on the back we've got the mandatory Rob Pierce short-short (or 'flash fiction,' as the youngsters call it). This one is a bit more pointed and wistful than his usual mal humor...

Rob put my story Primitive first. It's very much in my Shirley Jackson/Saki/John Collier mode, and it deals with my relationship with my mother in a fairly direct fashion. While I wish I'd written it yesterday instead of two years or so ago, it's still one of my stronger short works. I'll stand by this one.

William J. Fedigan's Catholic Prayers is too short to describe, operating on the boundary between flash fiction and poetry. There are times I worry we publish so many Catholic writers as to give the impression we're at war with the church.

Failure To Commit by Shawna Yang Ryan sets addiction, faith, and sex on an ungodly freeway collision. Ms. Ryan's novel Water Ghosts is a moody look at a slice of California history I should have been taught in school, and what -- really -- is she doing here? Doesn't she know better?

A quick aside. This is the thing that gets to me. When Rob and I started out, we had no idea what we were doing. And now, seven years and six issues later, we manage to attract a lot of 'real' writers, writers that publish professionally. I'm a nut with a bad back, and Rob is a family man who works at a copy store. We are not going to be paying for stories any time soon, much as we wish we could. So how is it we get good stories from good writers?

I think two things come into play. One -- we are fucking old-fashioned. We edit, and we print, and we do so in a way calculated to make the writer feel as if they have been attended to. Or beaten like a government mule, but in a refreshing way. The other is that we operate in a zone that allows us to print things that just wouldn't fit in anywhere else -- and sometimes even the best of families can produce a two-headed baby. We love those two-headed babies.


Still, how does being broke, picky, late, and having an inordinate fondness for the fictional equivalent of two-headed babies lead to something beginning to resemble credibility? I find the process confusing.

The Dog Shit House by Charity Ankrum was a pain in the ass to acquire. Charity is my sister, and she's probably the funniest writer I know of, on a line-by-line basis. "This shit is like Mark Leyner meets Jack Handey!" I'd rave, and she'd swirl her wine, look into the distance. "Yes, I know. So derivative." And she'd never do anything with her writing, and I'd scream. After nagging and nagging and nagging, I finally got this out of her. I wanted funny, and instead I got a harrowing revelation that my family is even more white trash than I'd thought, and it covers the same territory as my story with less artifice. God damn it. Put this story over one eye and Primitive over the other, and you can see a Richmond childhood.

Junior on the Lam by Don Jennings is another short shot, and this bad boy rains on its own parade with a little more media savvy than absolutely needed.

A Long Road by Craig Hartglass stubbornly, persistently refuses to do the obvious thing. Stories within stories and not so much an ending as a drifting downstream into the distance...

Okay, what I said up there about two-headed babies? How about a story concerning a Zoroastrian disco racquetball coach? I, Racquetball Coach by Keith Rutledge and illustrated by Robin Eagleton -- who is the first artist aside from myself to have work in Swill, and I hope he appreciates my giving him two whole pages -- is exactly the kind of thing that Swill exists to publish. It is really good, and completely fucked in the head. It is my special favorite. A twenty-first century Walter Mitty who insists on living his fantasies, protagonist Carl Henshaw's generically-scriptural voice and sincerity provide a dizzy, squirmy, hilarious read, and the illustrations give it the perfect Saturday Evening Post-Punk vibe.

Rob Pierce's As Good A Cop is sparse, brief, and more absent than present -- in the negative space/jazz sense, by which I mean you have to read outside the story if you're going to read the story.

Rob had sent me two stories -- "One of these is a shoe-in, and one I just want you to read." And one of the stories had been submitted by a friend of mine. Thankfully, Giant Spider In My Garage by George R. Galuschak was the shoe-in. If you have ever spent a lonely Sunday afternoon watching old black-and-white monster movies and gotten that feeling, then this story talks your language. George, by the way, is great. One time when a group of writers was talking about how much they liked George (this seems to happen a lot), I said, "George is like a houseplant or a fish tank," and got looks ranging from puzzlement to irritation. I said, "If he's in a room, it's a nicer room," and everyone nodded, and said, "Oh, yeah, I get it. Yeah. That makes sense."

Like I always say, the trick to making nepotism work is knowing the right people.

Fool Circle by Steve Young hits a particular Swill sweet spot -- the cleverly constructed gutter-level noir, the kind of story that's like riding a Wild Mouse that goes straight down into concrete.

Finally, Max Dunbar's They Walk Among Us.A panoptic view of a very specific, very real British dystopia. Nicely written with a strong local voice, wonderfully flexible viewpoints, and a solid moral underpinning. This is another of my favorites

And the six print series The Wet Season marks a real step forward for my imaginary landscape work. The new technique is producing the most satisfying results I've gotten so far, with an almost painterly quality that I'm quite proud of. Of course, I'm already wondering how I'm going to top it next time... For a second-rate artist, I have a good time.

One of the things I did this last year was to investigate the current literary scene. Well, Swill does not look shabby in comparison. I'm not going to go into it any more than that, but Swill is a legitimate contender, and Rob and I have begun discussing means by which we can further the cause of Swill.

And a surprise or two.