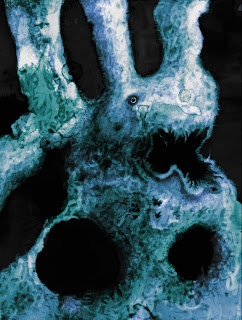 So there's this guy in the neighborhood. He's homeless, from Louisiana, and for some reason, I've wound up being part of his life. I've had difficulties with him -- he's shown up on the porch at three in the morning more than once, and I assume anyone asking for money at three in the morning is going to be using it to buy the kind of drugs that require a needle or a glass pipe for full satisfaction and enjoyment. Another time, he showed me a vent in his chest, a green-tipped plastic sleeve that looked as if it should have been used to dispense soda. So there's real need, and real shiftiness, and it's an uneasy relationship. He wants me to be there for him when he's in trouble, and I don't want him to think that's cool, and we have been dancing around this for about a decade. It's made me a more guarded person. I find it mildly amusing that he has health care and I don't. We bottom-dwellers notice these things.

Lately he's taken to spending the mornings laying in the driveway of the row houses on Sacramento, watching the corner of the schoolyard where his girlfriend was shot. When I heard about the shooting, I assumed that it was one of two women --  or, possibly, one woman. Because one was sober, called me Sean, and was very pleasant. She was an asset to the neighborhood. The other was kind of sleazy and called me Shane, and was always drunk or out of it on something. And they looked very much alike, and I always wondered if they were one or two people. I'd never been introduced to them; they just started addressing me by name and asking for change and I always assumed my three-in-the-morning buddy had passed on the word that I was a soft touch. That's why I stopped handing out change. It's too easy to form relationships.

Well, last Friday, my music buddy and I were coming back to the studio and the sleazy Shane lady passed me. Which means it was the nice woman who got shot. And if I get up and walk down the street, my pal will be laying there in the sun pretending his eyes are closed while he stares at the spot where she died.

So I know people with problems. I don't have problems, I've got issues. But this last month slammed me. Right before things got bad, I was feeling very self-congratulatory. I currently have my first major solo publication and my first solo art show in preparation. Even better, I'd managed to successfully address my most serious personal issues through performance. My counselor told me she'd never seen anyone make the kind of progress I'd made in the time we'd been working together. There's even a new issue of Swill in the works!

But then winter hit me. I started to worry. Am I going to be able to make Helping Henry good enough that it would make sense to ask my old teachers for blurbs? Why aren't I trying to sell my work harder?
That guy with the gallery really seems to take me seriously. Is this some kind of trick? So my insomnia kicked in -- my insomnia is the result of obsessive patterns of thought that induce stress reactions. If I can get more than five hours of sleep a night, I'm sane. I wasn't getting my five hours in. So after a few days of this, I took a dose of melatonin.  I slept, but I woke up with my back out.

Some months back, I was laying in bed thinking about pain. I had the usual dull pain in my stomach, and I realized that I'd been dismissing that pain because it never approached the levels of chronic pain I get from my back. I asked myself how I'd respond to the pain in my stomach if I experienced it on its own, without comparing it to my back pain. Simply posing the question was like flipping a switch. I immediately began vomiting blood. The ache in my stomach was digestive juices on an open wound.

So I started treating my stomach better, and things improved. But it got me thinking about my back. Every doctor I dealt with after my operation had a pre-supposed image of me, and I was never really able to break through and get them to actually try and figure out what was going on. Everybody already knows what they intend to believe about condition. So none of their ideas lined up, and none of them were useful.

I started to pay close attention to my back pain. And my current belief is that my operation was not a complete success, and there still is some cartilage or disc debris in there where it can make contact with my sciatic nerve. The pain responds directly and predictably to pressure, and there is also a tendency for minor stresses to build up and develop that suggests inflammation also plays a role. I was diagnosed with one disc ruptured and one compressed; I wonder if the spectacular rupture might not have hidden a more modest one protruding from the 'compressed' disc.

Well. The morning after I took the melatonin, I experienced the worst pain I'd had in distinct memory. The kind of thing where rolling over in bed requires planning and fortitude. I had my second conscious experience of synaesthesia -- the pain emitted horrible metallic noises that reminded me of those submarine movies my dad loves. They exhibited the Doppler effect as the waves passed up and down my leg. The missus offered to do some bodywork on me, and I reluctantly took her up on it. When I was dealing with the situation before my operation, she'd never been able to help with my low back pain and sciatica.

But she's learned a lot since then, and now she knew exactly what to do. She was able to get my lower back and pelvis aligned, and I was on the mend from that point on.

However, I was an idiot. The pain kept me from eating, and after a day or two, I broke down and got drunk in order to kick-start my appetite and got into a fight and was a general ass. What I didn't know at that point was that the flu was starting to take root.

There is great and plentiful drama going on in my circle at this time. None of your business, but full-on Greek drama crap. Life and death issues. As I said, I know people with problems. And I worry.

Because of the season and the circumstances, I've been spending too much time alone, and I stopped enjoying my own company. No music, no writer's groups, no walks with the dad, the missus going out of town... And it was getting to me. And I picked a fight with the missus. She'd been cruising for trouble, and I'd been ducking, and I felt justified in acting like a dick. But as I said, what we didn't understand was that we were both coming down with the flu, and it seems as if our new comforter was outgassing fiercely enough to screw with us as well. We managed to patch things together after I apologized, but the combination of the flu and the fight was utterly demoralizing.

I did have one of those moments, though. People talk about how 'movie moments' aren't real, but they happen to me all the time. When being me is fun, they're a big part of it. I stormed out of our house in a rage, and when I crossed into the territory of the murder of crows a couple of blocks over, one of the crows saw me and followed me, calling out to the other crows, and as I walked down the street more and more crows followed me until there were seven of them, cawing and wheeling overhead. Some of 'em had probably been by the tree outside my studio for a concert -- sometimes my crows have guests. If I hadn't been running a fever, the overstatement of the moment would have snapped me out of my mood... it was really cheesy.

I don't know if it was three or four days that I wasn't able to eat, but as soon as the flu started to lift, I had one of my bouts of stress-puking. I was able to get over it in the course of one night, and there was no blood. If I can go for three days without eating and not puke blood, my ulcer is gone.

Wahoo! And now that we've gone back to our old comforter, the missus isn't coughing and I don't have night sweats.

So, over the past month I have had every one of my ailments come up one after another, each one laying me full-out. I'm not torturing myself about it, but I made a few decisions that I'm ashamed of.  I have to make allowances for real duress, though. I lost fifteen or twenty pounds, and they were not extra pounds. I was using those. I'm still prone to dizziness and moments of weakness. I was on top of the world and now I'm a wreck.

I've been looking back and wondering how things could have gone better. I do know that by not paying attention to my round of eating, sleeping, and exercising, I did lay the groundwork for what came afterward. I know better than to drink in order to jump-start my appetite. And I know better than to pick fights with the missus.

But the fact is that I am vulnerable, and there are times when I will be taken out of the game, and I know that something happens every winter. And I have been more productive than usual. "Don't give me that total paralysis crap," my counselor said yesterday. "I've been watching you."

"Okay," I said. "I'm not doing the work I want to do as fast as I want to do it, and I'm extremely unsatisfied with the situation."

And that's where I am right now. I'm out from under the shadow, but I am vexed and uncomfortable. I'm being good even if I feel crummy. So at this point, really all I need is a good solid achievement or piece of unexpected good news and I'll be back on my feet.

I'm certain something's coming, because I am fucking due.
Posted by Sean Craven at 10:25 AM 1 comment: