I Am A Proud Patriot! 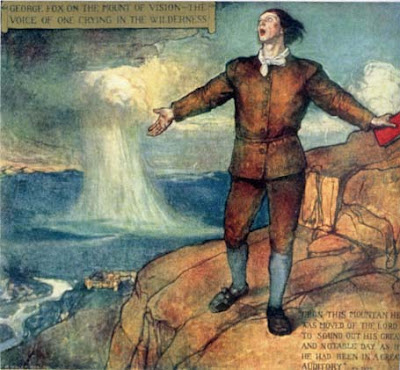 This is Violet Oakley's painting of George Fox, from The Founding of the State of Liberty Spiritual frieze cycle in the Governor's Reception Room, Pennsylvania State Capitol, 1902-06. Taken from The Rose Red Girls, by Alice A. Carter, published 2000 by Harry N. Abrams.

You can keep old George Washington; that vicious grifter did my kind no favors. Give me a lunatic idealist like George Fox any day of the week!

And when a gay Christian Scientist paints a Quaker? That's my America, right there.
So when I do a post complaining about US cultural, social, or political mores, I always come away with the little couplet from the Mikado dancing through my mind -- "And the idiot who praises in enthusiastic tones/every century but this and every country but his own." Makes me feel kind of shitty.

Well. My family has been on this fucking continent for twice as long as the US has been here, and while some of us have been ardent patriots, there have always been a few who have no damned use for nations. We hated it in Olduvai, then we hated it in Scandinavia, then we hated it in France, then we spent so much time bitching in England that they shipped our preachy asses overseas.

When we got to America? We hit the ground running, trying to get the fuck away from the assholes. One branch of my family has been in California for more than two hundred years, and the only reason I don't live in the goddamned Pacific is I'm too broke to afford a fucking inner tube.

My Quaker ancestors helped with the underground railroad -- fuck the law, thank you very kindly -- and militated for Native American rights when that cause was very unpopular indeed. My dad is one of the founders of the letter carrier's union, and as a child I nailed picket signs together.

So when I bitch about America, I do so from a certain fucking position. I am as American as you can get, and hating the government and the robber barons that employ it is part of that tradition.

As an institution? I hate America.

But this is my place, and these are my people, and I am sick of having my sense of connection determined by how offended I am at our national excesses -- or to put it another way, it doesn't look good to run around screaming, "I hate America!" at the top of my lungs every so often. Just because I track the history of our nation from the first smallpox virus through Michele Bachman doesn't mean I shouldn't avail myself of the privileges attendant to patriotism.

Of course I'm a proud patriot. It just took me a while to figure out how everybody else does it -- they inspect the history of the US, take what they like, figure out how much of the shitty stuff they can stand thinking about, choke down as many lies as they can believe, and then put together an imaginary nation they can worship wholeheartedly.

First off, I'm going to have to pick some sides. The two biggest teams in America (apologies to my fancy international friends, but as a patriot I'm afraid I must refer to my nation of birth as America rather than the US or the USA -- according to playground rules, I have to stick with the nickname) are the Utopians and the Grifters. The Utopians are, for the most part, fuzzy-minded losers entirely too prone to getting all hopped up on Jesus, but the Grifters are the vilest, most pernicious pack of predators the planet has ever seen -- the air we breath is thick with the stink of their venomous words and deeds, and we labor and suffer under their yoke, our skins blistered by the radiance of their self-satisfied grins.

So I'm a Utopian!

Patriots worship the Constitution. For a lot of folks, it's a secular Bible. I can dig it -- there is some very stirring rhetoric there. My two favorite passages 0f writing are the Preamble -- thanks to Schoolhouse rock, I have the damned thing memorized -- and Martin Luther King's letter from the Birmingham jail. And the Bill of Rights is solid.

The rest of it is pretty much concerned with creating and maintaining the privileges of the monied classes, and you can insert the Declaration of Independence into the founding father of your choice (mine's Hamilton -- I hate everything I know about that bastard, and would like to bring him back to life so I could shoot him myself). That piece of shit was basically a bunch of rich guys writing a check they cashed with poor guy's asses. Shall we discuss the issue of scrip?

I'll claim a bunch of cultural stuff. I am aligned with the great American tradition of outsider artists from Walt Whitman and Emily 'Doo-Da' Dickinson through Harry Partch to Henry Darger, and also with that great refuge of outsiders, popular culture.

Let's go for a bit of genuine pride -- while their America is oppressing people? The resistance is listening to my America's music. Ask the Soviet bloc countries if rock and roll has power, if it can change the world. Go look at the fucking statue of Zappa in Lithuania -- he meant freedom to someone.

My America gave them that.

Let's go further. The civil rights and egalitarianism that we see as essentially American -- and this is in fact the case in my fucking America -- were not handed down to us by a cabal of Deist sots in periwigs. That creep Jefferson had enough grandeur in his soul to give us the words, but it was resistance on the part of the populace that made those words come to life. The people who gave us the right to vote? The right to protest? The right to strike?

I've mentioned that my thoughts on the Occupy movement have been shifting. I've spent my whole fucking life bitching about the need for a populist movement to come along, and when one does? I send it back because it isn't the kind I like. Fuck that; the Occupy movement is part of my America, and hopefully, more functional movements will grow out of it.

There we go. That's a start. It's rough, but it's enough to work with.

I suppose I should learn to like sports next. Or cars or telephones.

Church might be interesting...
Posted by Sean Craven at 2:55 PM 2 comments: