How I Happened: Ancestry and Infancy 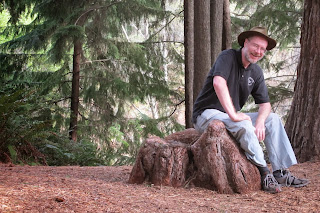 (So in conversation with my shrink, I realized that she didn't have a clear map of my life, especially in relation to my state of mental health. I think I'm going to try and construct some kind of therapeutic autobiography here...)

When the missus met my paternal grandmother for the first time, she turned to me on the drive home, and said, "So you don't have any sane grandparents."

"Pretty much," I said. Things tend to get diagnosed more often on my dad's side of the family, but both of my grandfathers were alcoholics, as were both of my parents. My paternal grandfather died of heart failure in a psychiatric institution. He had grown obese while institutionalized, probably a result of his medication. Of course, he had been locked up for getting naked and saying he was Jesus, so there's that side of it. My other grandfather had been reported dead by my grandmother, who told me dozens of different stories about the alcohol-related incident that had taken him when they lived in the Philippines. My cousin has since found evidence that he actually moved to Japan and had another family, who does not wish contact with us. A friend of my mother's spotted a photo of her father with his best friend. My mother's friend had been an MP in the Pacific theater during World War II; he pointed at my grandfather's best friend, and said, "That son-of-a-bitch was the biggest diamond smuggler in Southeast Asia."

I have always felt as if I were a cross between my two grandfathers. They are nameless and faceless to me, and they will never go away.

My grandmother would certainly have been diagnosed with OCD and depression if she'd been diagnosed. I have been told that from time to time she would tell third parties, in an ominous tone, that she was the only one who really understood me. This suggests to me that people knew there was something up before I did, and that she may have had more dramatic symptoms than she let people know about. She maintained a reputation as eccentric rather than crazy. Her most visible oddity was her devotion to Christian Science, which, sorry, Monitor, is a cult, and is just as whacky as all get-out. Lots of religious fanaticism on both sides of the family, and I think religion disguises a lot of nuts, don't you?

My mother also suffered from depression, which she treated with alcohol and denial. She began drinking heavily in her early teens, and stopped just before her death when it became impossible for her to hold a beer can. From time to time during my childhood, she would erupt into a self-righteous speech about how she would never drink or smoke during pregnancy.

I have been diagnosed with fetal alcohol syndrome.

My mother feared her mother. When I was engendered, she kept the news to herself for a while. She was nineteen then, and had no real direction, and wasn't married. So for the first part of the pregnancy -- I know the next statement is true, though I have no evidence for it aside from myself -- she sat in her room, smoking and drinking. At first she didn't know, and then she was in denial.

Finally, she told my dad. They fled the state, they married, they travelled cross-country in the company of a working con artist, and my mom had me in Cedar Rapids, Iowa, because that's where you go when it's fucking February. She claimed to have been too broke to eat during the weeks prior to my birth.

There's a theory that left-handedness results from stress experienced by the mother during pregnancy. It sounds silly to me, but I have an affection for that theory.

My family moved back to the Bay Area. I lived in San Francisco for a couple of years, and then we settled in Richmond. I was a precocious child, talking at an adult conversational level by the time I was nine months old. So if you were in San Francisco during the Summer of Love and you had an encounter with a talking baby?

That wasn't acid. That was me. I toilet-trained myself -- my parents would find me naked under my crib every morning. Finally my dad found me crouching on the toilet bowl in the middle of the night when he got up to pee. He tells that anecdote as a horror story. It's pretty good.

My current therapist has suggested that my early development may have been a reaction to my environment.

My parents were too young to have kids, and too drunk to have kids, but thankfully they had three of us, so I had a reason to keep my shit together. It has only been in recent years that I've come to realize that I was damned close to being a feral child. I was not raised at all. I just happened. My parents provided for my needs, but as for education and guidance? Nada.

Or, rather, jokes and non-sequiturs. My mother could get herself interested in teaching us imaginary words, or learning to pick up oranges with our feet (I'm actually grateful for that one, monkey feet are useful), but as for training in everything from grooming and manners to maintenance of health?

Especially the latter. Because of her Christian Science background, my mom thought the thing to do with a sick kid is make them feel guilty.

I had to go to a writer's workshop to learn that you're supposed to keep something in your stomach if you know you're going to throw up. I tore a hole in my stomach because I didn't know that. I could have stayed out of the hospital if I'd known that. That is the level of ignorance I face in myself. I do not know how to operate my damned body, let alone negotiate the world. I may as well be from Mars.

But since I was so clever and articulate? Nobody noticed. When a small child is fucking with your head because they've become prematurely existential, you don't notice that they think butter is a food or bullies can be reasoned with or that they read while walking.

So at this point, I've got some heredity going on, I've got a terrible prenatal situation, and I'm being raised by negligent, drunken parents. And yeah, I got beat some.

But all that was okay. I was happy, functional, regarded as a tiny wonder by the adults in my life.

It was public education that screwed me up.
Posted by Sean Craven at 8:28 AM 11 comments: