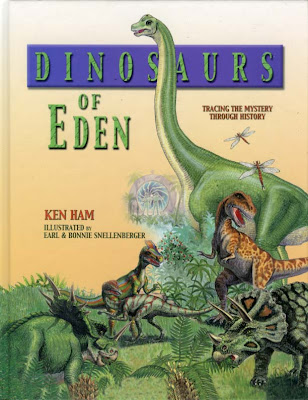 (All quotes and images copyright 2001 Ken Ham, and are used for purposes of review. All art by Earle and Bonnie Snellenberger.)
Oh, yard sales, what wanton agents of fortune you are. I have been looking at this book for the last six months, trying to figure out how to write about it. The problem is that it's hilarious.

Ken Ham is a young Earth creationist. He argues that the Bible is literally true, and consistent with the fossil record, and that dinosaurs have lived alongside man until very recently.

Every single page presents one with a worldview so patently deranged that reading it is like being slapped with a rubber chicken over and over again. Nothing about it isn't funny.

Except that it's presented to children as fact, with the promise of Heaven and the threat of Hell held over them as a goad to belief.

I am an atheistic materialist. I find this is the only worldview that is both internally consistent and congruent with observed reality. I do not object specifically to the existence of religion, although I regard it as a sign that humans are not perfect thinking machines. I will say grace, I will attend church if invited, I will pray alongside the faithful when it is important to them. My feelings about religion are mixed. I state this up front so as to make my perspective clear.

Let me tell you something. If nothing else, living under the Bush administration taught me something about the banality of evil. This book features evil whose banality has gone baroque, and it announces itself as clearly as the hard buzz of a rattlesnake.

Young people often ask the question, "If there's so much evidence for the Flood all over the earth, and if it's so obvious God created, and the Bible is true, wouldn't the scientists surely believe these things?"

The answer is that scientists, like everyone else, are sinners. Because of this, they don't want to believe. It has nothing to do with the evidence. (Use of bold taken from text.)

If you are an adult, and you find, "Because I said so, and only bad people argue" convincing, you are an idiot. If you find the blanket condemnation of scientists as willfully-ignorant sinners acceptable, you are contemptible. But if you hear this when you're a kid, and your critical faculties haven't been developed, well.

In the future, the US will be able to look to Mr. Ham and say, "He helped keep our children away from science." I do not believe that will be regarded as a good thing. Mr. Ham is militating for a stupider nation.

I am not going to do a point-by-point refutation of Mr. Ham's position. I simply shrug, and say, "Geology, biology, paleontology, astronomy, chemistry, and physics all view the world the same way, and they work. You don't have the integrity to keep your own story straight, so not only is everything you say wrong, it isn't even wrong from a conceptually valid stance. Nothing you say is correct once you drift from the idea that people should be nice. Arguing with you is like braiding worms, and I will not do it."

I am going to engage in a bit of humor at the expense of Mr. Ham and the Snellenbergers. But as I do, please understand that I've imagined being a small child, and having the minister I have heard speaking with authority on the subject of sin and the fate of sinners come to me with this book.

I'm thinking about how much larger the minister is then I am. I imagine cologne, and warmth from his body as he sits next to me. This is a man of authority. He shows me a picture -- 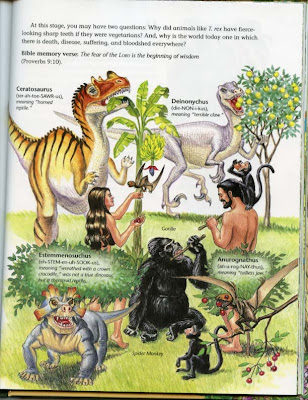 Take a close look at that gorilla. The single most important goal of this book? Get teeth wrong. Every damned time they show or mention a tooth? They get it wrong. Oh, and it's Eden so of course lemons are delicious. What kind of dummy are you, anyway?
-- and tells me that the only reason anyone would disbelieve it is that they are sinners and they choose not to believe.

What happens if I laugh? I don't know. But there is no way this situation could ever work to the benefit of the child.

I wanted to make this clear before I start with the haw-haw -- I am not belittling Mr. Ham when I mock his beliefs. Rather, I fear and despise the power he has over the lives of others.

He may be a good man. He may be, in the balance, a good father. But to present a child with this kind of cognitive dissonance is damaging, and worthy of strong rebuke, and I cannot find it in me to respond to this book and its mindset with anything but condemnation.

I understand that religion is the most important form of folk culture in the world, that the intellectual tradition springs from religion, that it is an important force for social organization. But it is the easiest way in the world for someone to simply claim a position of authority and begin exercising power and...

... remember what I said about the banality of evil?

Click on this image for madness. QED, motherfuckers.
What I love about this diagram? The implication that there is no problem here, see? They fit!

Now, the myth of the ark makes sense if you only know about a couple of dozen types of large animal, but by the time you take the world into account -- how many types of tapir are there, anyway? -- you have to start getting into some serious handwaving to get it to make sense, and our boy Ham here decides fuck it, pedal to the metal, we're including the entire fossil record as well. All of it.

Do you think he has a little cart in which to carry his balls, or do attendants bear them in a sling? 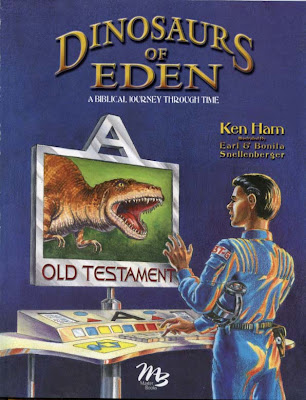 Is is just me, or does that kid have a holster? What kind of Bible-science bullets does it shoot? Or is it a zap gun? Probably a zap gun. This is all so exciting!
What's cute is the way Ham hates science so much he's going to reclaim silver jumpsuits for the faith. And the Biblical control panel is a concept resistant to speculation -- what happens when you turn the knobs? Maybe it adjusts Leviticus so you can stone people you don't like without having to eat kosher.

And let's take a moment to notice the semi-competent art. I bet the Snellenbergers have taken classes, maybe even have a degree or two between them. But the stiff, clumsy, vaguely ugly quality of the illustration is of a piece with the text.

When religious belief takes on a quality of grandeur, when it truly does exalt the human spirit, then it's hard for me not to get swept up in the moment. But this book shows a world without wonder -- flat words and images have condemned it to a sort of folding-chair spirituality, a cafeteria of the soul, a holy linoleum. 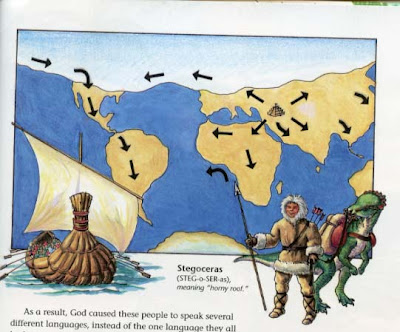 Okay, start at Babel, head North, and then turn left when you get to the white part.
I'll give them this much. I like this one. The idea of a polar pack-Pachycephalosaur is genuinely charming, in a crack-brained way.

I can't tell you how much pleasure and concern this terrible, terrible book has brought me. But interestingly, it has also led me to perform a dangerous act only to have my faith in mankind renewed. 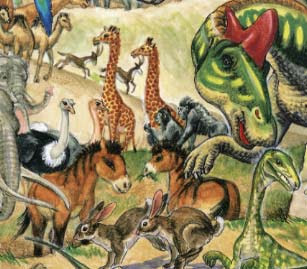 These horses show up over and over again in the background of illustrations in this book, and they are never given a name. Actually, they aren't horses. The only type of living wild horse is Przewalski's horse, and these aren't those.

My current thought is that these are a Snellenberger's concept of a quagga. But the question of their identity was really bugging me. So I did the only Google search that I thought might give me some solid information. It was also the single riskiest search for images I've done since Harlequin ichthyosis.

But in this case?

Zebras, onagers -- wild asses. The ones I was looking for. The first screen I called up was entirely crazy little horsies of one kind or another.

I actually responded emotionally to the moment. Don't get me wrong, I don't feel crappy if I run across a picture of a cute butt on the net, but the idea that I could get clean results from that search seemed nothing short of miraculous. Perhaps I sensed the hand of God at work, a kinder God than one who'd put an old drunk on a boat with a bunch of fucking dinosaurs.

I didn't go to the second screen. Why tempt fate?
Posted by Sean Craven at 7:41 AM

One never knows, does one?

The 'polar pack-Pachycephalosaur' is actually a green tauntaun, isn't it? Without fur.

I wonder if it ever strikes these fundamentalist types as ironic that they tweet, browse, and publish through the wonders of modern technology, a direct result of applied science.

Yeah, I'm just waiting for those faith-based schools to start turning out engineers. That should be hilarious.

Brilliant insight. I love it! Thanks Sean!

Posted this to my FB profile.

Thanks, Lou! The numbers on this one are already crazy. I suspect I may have gotten myself into something here.

"WE BELIEVE that God directly created Adam and Eve, the historical parents of the entire human race; and that they were created in His own image, distinct from all other living creatures, and in a state of original righteousness." From: http://www.wheaton.edu/About-Wheaton/Statement-of-Faith-and-Educational-Purpose

Well, actually, engineering does seem to have an uncanny affinity with creation science. "Of course this was designed."

Yeah, one of the annoying things with those pop-science shows on the Discovery Channel is that they often use creationist-tinted language: "The spiked tail of the Stegosaurus was designed to..."

Genetics show us that the lemon is a hybrid plant that was created by humans cross pollinating natural species. This plant could not have been present in the Garden of Eden.

Sean- On the subject of a fundementalist engineer, I worked for one, sadly. While he and his family were very nice (I worked with his kids... all of whom were homeskooled, with this very book on their book shelf no less!!!), their whole mode and method to life had a creepy unnatural feeling to it