A Cover for Ghost Rock 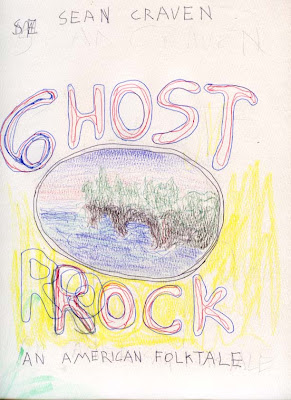 Yes, this looks like a stoned fourteen-year old did it in study. They're called roughs for a reason...

First, it needs colors that spang across the room. So primaries for the most part -- yellow for the background, then the big lettering in red, white, and blue with black outlines, and a full-color, painterly illustration in the center.

The center image will be given a decorative frame based on those found around guitar soundholes; it's also intended to bring to mind such obsolete, rock-age music media such as CDs and LPs.

I'm looking forward to the next stage of the project -- the lettering. I've done hand-lettering for cartoon and comic work before, but this will be my first shot at decorative lettering. For the title, I'll be using sixties/seventies psychedelic posters and album covers as a jumping-off point -- I want something that's both legible and a little hard to read.

Bright colors grab the eye, while a small fully-rendered image and elaborate lettering request further inspection. Pick it up and take a closer look...

Anyway. I'll be rendering the title lettering in pencil on tracing vellum, using a print of the above template as a design, then importing it into Illustrator and autotracing it to get a scalable version. The goal is to have the separate elements of the cover ready to resize and reconfigure to easily, tastefully, legibly inhabit various sizes and formats of cover.

The letters themselves will be eccentrically shaped, full of color and detail. Ugly as sin, in an appealing way.

The lettering for my name and the subtitle will be done in brush pen. I'll do ten or fifteen versions of each letter to be used, select the most attractive and harmonious, and then autotrace and arrange them in Illustrator, making whatever adjustments to size and weight are necessary to make them read properly.

Why does my name go on top? Well. Name on top indicates that the author is more important than the work. But usually, name-on-top authors are a draw for readers -- your Kings and Tans and Krantzes and Koontses. So their names are in big fat easily visible slabs of non-serif solid-color type. This time? I ain't a name. So my name is in modest type. But I'm designing the damned cover, and I wrote the damned book. So my name goes on top.

As for An American Folktale. One of the major subtexts in the book is the integration of personal, national, world, and archetypal mythology. I regard popular fiction, and especially the genres of fantasy, science fiction, and horror, as being in many instances a naive or folk form, and I've tried to bring as many of those virtues to the work as I can -- I think that if someone comes to this book wanting nothing more than a good slam-bang adventure, they will be perfectly satisfied at the end of the book.

But I've put a lot more effort into undermining and examining the assumptions behind those kinds of stories, not so much out of an intent to subvert as an attempt to see if anything of worth can be reclaimed from what seems to be cultural detritus. If anything can be profitably applied to real life.

And while not overtly political, and not historical fiction -- it is set very much in a Never-Never Narnia version of the US -- it does speak of history and our national origins and how these still define our lives in a very subtle way.

Look, it's a little puffed-up and douchey to have a subtitle like that. It says, 'There is more here than meets the eye.' But in this case it's fucking true, and I think a lot of readers will get more out of the book if they go in wondering, "Well, what makes this shit an American folktale anyway?"

So why the fuck am I doing the cover, you may well ask? Writers don't do their own covers! They don't even have much say in the covers, right? And don't you have better things to do? Like Swill and the book itself?

I'm inching along. And breaking up my work with something like this helps me inch.

I'm going to give copies of the novel to a number of friends and cohorts, and I want a nice cover for that. And the bit about how publishers aren't into author input on covers? I might be wasting my time, but I suspect it applies more to people who aren't actual designers than to me, he said arrogantly.

If there's a strong cover attached to the project from the beginning? Even if it doesn't get used in the end, it's still a useful way of drawing attention. And my time with Swill -- which also has a cover in the works -- has taught me that there's a certain emotional response I get when a project gets to the point where you do the cover. "Yep, that's it, it's almost out of my hands now." I want that feeling with the damned novel.

Plus, you know. I've never done anything like this before, and it's got my Stanley Mouse/Roger Dean vibe on the rise. Hand lettering! That's going to be fun.
Posted by Sean Craven at 9:53 AM 2 comments: