If You Must Know 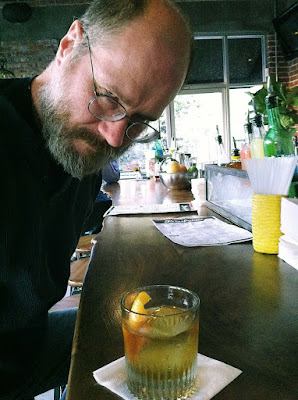 Photograph and beverage courtesy of good pal Deborah Kuchar.
1. It's not like I haven't been trying to post. I've been making at least one abortive attempt a day, more often two or three. Sometimes more. Sometimes it just comes out drivel, and I do enough unintentional driveling without making a point of it. So actually, I've been blogging like crazy, and you should be glad I've kept the results from you. It's everything else in my life I haven't been doing.

2. It is February, my worst month. "Maybe you should give yourself a break," the missus says. "Have you thought about how much you did this fall? Maybe you need to rest," my counselor says.

I'd rather be working, or practicing. Instead? I wind up pacing, napping in the afternoon staying up all night. I stop, staring, for extended periods while something in me says, all virtue is gone from the world, and you had none to begin with. To which I respond, fuck you, you're full of horseshit. And then I go on-line and read about old Dungeons and Dragons crap, and look longingly at pictures of fretted instruments with four strings or less. (Courses of strings count as a single string -- an eight-string bass is a four-string instrument so far as playing it goes.)

Believe me, it's not wall-punching, sign-folding, stranger-frightening February this time around. It is a mellow, cushioned, gentle February.

But I fucking wish I was working.

3. I am in the finishing stages of a whole series of interconnected projects ranging from the next issue of Swill to the novel to an art show to a podcast and on and on and on in mad profusion. When I'm back in working form, I'll be knocking things out, boom-boom-boom.

And then I'll engage in a period of self-promotion, trying to find homes for my work, trying to further establish my public self.

Have I mentioned that I suffer from social anxiety? I am currently sabotaging myself in order to delay having to meet strangers, learn their names, and so on. I'm confident enough about my work. I just don't believe in good results. It's like a disposal -- I don't think there's any way it's going to spontaneously turn on when my hand's down there, but I believe in the possibility nonetheless.

Meeting strangers is like putting your hand in a disposal; it's a perfectly harmless act no sane person would commit under any circumstance. And if I finish any of my projects, I'm going to meet people. There's no way around it.

4. They said nice things about me in the local giveaway paper, and it made someone grumpy, and that made me sad. Then my friend Deborah (over the drink pictured above) pointed out that I was more concerned with the grumpy person's well-being than my own hurt feelings, and I was overcome with such a disgusting treacly wave of smirk-encrusted self-satisfaction at my own benevolence that it almost justified the whole ridiculous situation. I'm very sensitive, he said.

5. I have no idea what I want in life. I mean, I know what I want to achieve, but what do I want? Lately, I've been having people ask me that question. And if I give them an answer? I get what I ask for.

I am not going to talk about this shit because some of it's personal to other people, and some of it you would not fucking believe.

I don't know how to want things properly.

I'm scared to want something. The idea that if you ask for something, it will be forever banned to you has been an essential part of my mindset for as long as I remember. The best things in my life have come to me as surprises. There is no connection between effort, desire, and results in my world.

So I've learned not to want things, or ask for them. And now this fucking question keeps coming up.

What do you want?

What the hell does that have to do with anything? It's making me crazy! I am being faced with more and more possibilities in my life all the time and the only answer I've got is I'm just trying to be good.

I'm not phrasing this correctly, but the situation is creepy and depressing and makes me feel as if I'd been raised in a box and was just seeing sunlight. And now I can't feel good about either the light or the box. My life has been so limited I don't know if I'm fit for free-range.

I don't want things. I think I want them, but when the time comes, I turn away, I defer.

I'm scared to want things. I think these promises of plenty are lies.

So I will not want.

Driving me nuts, I'm telling you.

How do I present myself to the world?

How do I bridge the gap between the intensely personal, intimate nature of my art, and the need to market it in a professional fashion?

How do I accommodate the passage of my visual art into the physical world? Simple prints are nice, but the don't feel like Real Things to me. I need to be able to produce real art objects of gallery/museum grade. This is an unexplored realm, and I have no idea where it might take me.

That's the thing. All these big projects seem like starting points rather than the finish line. This is arrogance on my part, no doubt, but I still don't feel as if I've made contact with the Big World, the place where I can really cut loose and do something.

If it were up to me, I might go with Motherfucker, Negotiable Rates, but thankfully there are several layers of human judgment between me and a finished business card.