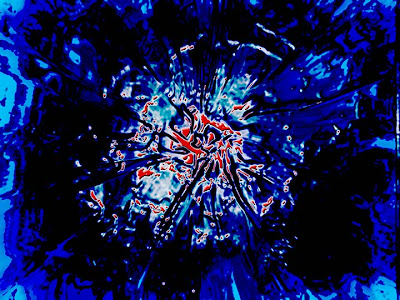 The missus put her hand on my leg and looked up at me. I could tell from her expression that I’d done something sweet, though I couldn’t imagine what. When she spoke, her voice was gentle.

“You’re like a wild animal that’s really friendly because he knows he’s sick.”

Oh. Okay. Not what I was expecting, but fair enough.

It’s been a rough winter, and this last week may have been the worst. The whole thing started around the end of November, start of December, when I had a lovely bout of vomiting blood for three days and nights before being carted off to the emergency room. A dose of morphine, five tranquilizers, and half a gallon of saline later, the diagnosis is given.

Throughout my adult life, I’ve had periodic stress-related health crises. Eczema, spastic colon, tremors and tics, things of that nature. They typically present as being serious medical issues before being revealed as stress reactions. So this wasn’t as much of a shock to me as it might have been to someone who hasn’t been through the mill.

(I have to confess to a certain admiration for the directness of this maneuver – let’s just pump blood directly out of the body in as dramatic a fashion as possible. Well-played, brain. I didn’t know you had the nerve.)

I agreed to go to a public mental health clinic, and to do what I was told. I promised full cooperation. I delivered. Here’s how it turned out so far.

The nurse I first spoke to told me that I had to regard myself as having an allergy to stress, the way some people have allergies to peanuts. The first doctor said I had PTSD and OCD and bipolar, and put me on two anti-depressants and an anti-psychotic.

I had some strange and unpleasant reactions – which were predictable, to a certain degree. I had a couple of days of butt-kicked lassitude, and then I began to feel as though I were coming down from speed. I ground my jaws, counted my teeth, and began rubbing my tongue raw. My thoughts raced pointlessly, and I found myself pacing or freezing in thought for extended periods of time. For a number of days, I had to exert conscious effort in order to slow my speech enough to talk to people. I was completely incapable of working – the irony being that I’d just been offered some work, which I started, and then had to apologetically turn down.

Hell, I haven't even been able to blog.

In my entrance interview for counseling, the interviewer suggested that I have an overall workover, that something like brain damage might be my real problem and I needed to have an EEG done at some point. When I mentioned this to my dad, he suggested that fetal alcohol syndrome was a more likely candidate.

The next doctor I spoke to thought that he spotted a light dose of fetal alcohol poisoning in my features. He reduced the dosage of one of the anti-depressants. But in the following days, my symptoms of agitation continued to worsen. I found myself obsessing over aspects of my life that were difficult, unsatisfactory, or unresolved, and on that basis set out to screw up a few relationships.

Then I found out that I’d blown a planned trip to a writer’s workshop by mistakenly and persistently misreading the date over a period of months. This was exactly the kind of boost my self-confidence needed at that point.

So that brings us up to this last week. The last time I’d gotten my pills, I’d been given a list of clinics in Berkeley that I should go to. Being a cautious fellow, I made my first trip with a couple of days worth of pills to spare.

This was good thinking. The first clinic I went to responded to my presence with a look of cold horror, as though they’d never seen anything like me before. A few phone calls were made, and I was told to go to another clinic.

So the next day I go to the other clinic, wait for it to open, sit in the waiting room, patiently take my turn. Well. It turns out they didn’t have a shrink at that clinic. (Didn’t keep the doctor from telling me that all I needed was tranquilizers. Jotted down a few recommendations. It was at this point that I realized that every doctor I spoke to was going to have a different opinion.) They told me to go to a third clinic.

This time I’m smart. I call first, and find out that I can’t do a drop-in, I need to register, and then make an appointment. I moan, because I have one day’s worth of meds left.

Doesn’t matter. The next morning when I get up, my back had gone out from the time spent in waiting rooms. I am not going to be able to go to the clinics, period. There is a certain point in physical pain where you just ain't gonna, where if someone says, "The couch is on fire," all you can do is hope they move your legs. That's where I was at.

Which meant that I just had to go through cold-turkey withdrawal from three different psychiatric medications. The first night of total sleeplessness was made almost bearable by the continual flow of visions of jeweled masks made from living insects; if it weren’t for the hot flashes, shakes, sweats, and smothering waves of anxiety it almost would have been a good time.

I have spent the past five, six days riding the fallout, feeling the radical restructuring of my brain chemistry. The worst is past, but it was pretty bad there.

This brings us back to the moment with which I began this post. When the missus lovingly compared me to a maimed animal.

Look. I never have easy winters. But this is ridiculous. I have completely lost track of myself. When I entered the process of treatment, I did so under the threat of, well. Puking blood until I died or something comparable. But those close to me have been counseling treatment for some time, and this last year the missus joined their ranks. This has been due for a while; I was just hoping it could be delayed until I got onto some kind of regular health care.

The problem is, is that the timing was perfectly off. To begin a process like this during the winter, while I was between creative projects, was a request for trouble. And the types of medications I was given are thoroughly inappropriate for someone who may not have reliable access to care. I was thoughtlessly put into danger of withdrawal. The initial request that I made for medication – sleep aids and tranquilizers to be used on an interventionary basis, with some protocols established so I know when to use them – was the proper one.

But the real issue is that on entry into the system I began to view myself as a mystery to be solved. We – doctors included – are trained to look for the problem and the solution in situations like this. If I can be given a nice straightforward diagnosis, then we’ll know how to proceed.

It’s bullshit, at least for me. If I have one clearly diagnosable condition, I have half-a-dozen. I am too weird and complex to respond predictably to medication. And I’m also close enough to working so that an extreme response is probably not appropriate.

What I’ve forgotten is that under the proper circumstances I am a functional human being. I am not a collection of symptoms, I am not a disaster, and I am not a hard-luck story. It’s hard to remember that when I’m dealing with the health system, which is why it’s been so unhealthy for me.

I need to find out how all this affects my status, but from this point on, I can't let the doctors determine my treatment until I get a permanent physician. None of them are going to know enough to make a reasonable decision. It's hard for me not to assume that they know best, but in this case? They don't. They can’t. And I need to tell them that.

I have never gotten solidly good results in my life by attempting to tackle my mental illness head-on. Rather, it’s best if I focus on making positive improvements in my life in general, and allow my mood to trail behind my activities in importance.

Right now, rather than focusing on my difficulties, I need to get a grip on myself and return my life to its proper focus. I have allowed myself to become lost, to spend my days desperately trying to make the time pass until I feel well enough to be myself again. This could be the usual winter blues as much as the current shenanigans, but it needs to stop.

It’s time for something good for a goddamned change.
Posted by Sean Craven at 5:49 PM 9 comments: