The Art of Eating 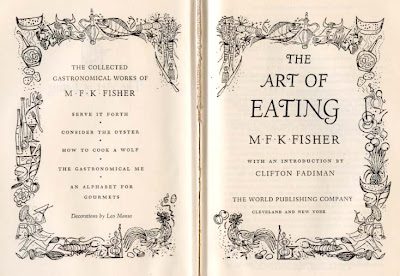 Recently, Warren Lutz asked me if I could suggest some books for him to read. Warren is a strong contender for Best Writer I Work With (you will hear of him, I assure you -- here's a taste), and he wasn't after something fun to fill an afternoon. He wanted the good stuff, the kind of writing that makes you want to reach a little further, try a little harder.

My immediate response was to go to the shelf and pull out The Art of Eating by M.F.K. Fisher.

It would be reasonable to suggest that my regard for this book is tinted by nostalgia -- I first read it on Christmas vacation during the fourth grade. My mother and I had taken a trip to go Christmas shopping in Berkeley, taking advantage of the still-exotic BART train. On the ride home, I complained that I was hungry; my mother passed the book to me, open to the chapter called How To Be Cheerful Though Starving.

This book is a mixture of history, food essay, and memoir, all swirled and mixed. There are recipes; to regard this as a cookbook is simply inaccurate. This is an exceptionally fine work of literature, one which provides the pleasures of exquisite craft, sensitivity, and refinement in the service of a powerful and distinctly feminine intellect.

But while this book serves the intellect well, with passages dealing with everything from historical observations to the deliberate cultivation of a relationship with food, it is the emotional presence of Ms. Fisher which grounds the book, providing it with its most consistent element.

While it does not have a narrative, this is one of those books that provides one with a real sense of the wealth of life, of the profusion of joys and sorrows that constantly attend our existence. Love and death, sickness, madness, violence all have their turn on stage, but this is a reality rooted in the need to provide food for yourself and those you love, and it is through the alternately cold and loving demands of domestic life that all of history and all of Ms. Fisher's life are eventually filtered.

What I'm saying, this is a book rich and wise and singular. Much of my ability to enjoy life has its roots in the lessons provided by Ms. Fisher's elegant and practical Epicurianism.

This is not a book to read straight through. It consists of five volumes of loosely-connected essays. Serve It Forth alternates memoir and history, Consider the Oyster adds natural history to the mix and focuses on one food item (this one was my favorite as a child, although I hate seafood), How to Cook a Wolf was done as a series of satire-laced advice columns during WWII. The Gastronomical Me was my least favorite as a child, but as an adult I have a greater tolerance for its estrogen-redolent atmosphere of romance and sexuality. If you don't require explicit descriptions, the eroticism here has a dark, nasty punch. An Alphabet for Gourmets happily wanders the field.

Which is what I'd suggest to the reader. Leaf through it, pick around, read an essay at a time until you feel compelled to bite off larger and larger pieces. Some books are company; this book -- wise, sweet, coldly practical, possessed of the wry musty humor of a true scholar, fiercely, achingly vulnerable -- is a true friend.
Posted by Sean Craven at 5:27 PM No comments: 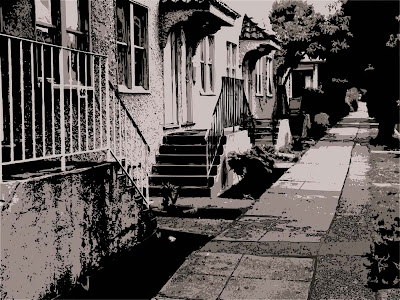 I'm gonna try and pull my head out of my ass and get some posts up this week, even if I don't do anything else. So here's the big question -- why aren't I over in Oakland catching rubber bullets? I could fucking walk there -- what's my problem?

The problem is this, my droogs -- there ain't nothing over there for me to agree with.

I don't believe the myth of the revolution. I can't think of many cases where a revolution turned out to be an improvement in terms of quality-of-life. The ability to tear down a government and the ability to build a healthy society require entirely different skill-sets, and if you got one? You probably are severely lacking in the other.

And the basis for the protest here eludes me completely. It seems as if all people want is to be seen, to be heard -- well. I've got a fucking blog for that nonsense.

The culture of protest here in the East Bay has a genuinely honorable heritage, but that heritage is gone, its last vestiges buried underneath the flung scat of the tree people. Right now all all I can hear is the wail of an angry child.

If I had any sense of a coherent message with which I could align myself coming from Occupy Oakland, I'd be there. It breaks my fucking heart that I look at that situation, and see a bunch of kids taunting the toughest gang in town. It looks idiotic. And the self-lubricating jackoffs trying to up the levels of conflict are not the kind of fools I suffer lightly. The arrogance of their position statements disinclines me to their aid.

Look. I started working as a janitor when I was thirteen. I have been hungry because I've been out of work and money. And it is very difficult for me not to see revolution in America as a middle-class sport, the kind of privileged passtime that justifies buying a bunch of Spandex and Gore-Tex and then threatening the fucking cops while in someone else's fucking neighborhood.

Normally, I don't discuss politics on the blog because I'm not well-socialized enough to really understand them, and I'd just as soon not look like a fool. But let me make a few statements here.

The problem is not the 99% versus the 1%. There is an absolute sense in which the needs of the poor and the luxuries of the rich do exist in conflict. That is not the problem we face in this crisis.

The problem is specifically the financially predatory classes, those who occupy a strange netherworld where money exists not as a means to regulate the exchange of goods and services, but rather as a thing in itself. It is their pursuit of abstract profit through the manipulation of the law that has brought us to this pass.

Anyone capable of viewing the teachings of Jesus Christ and Ayn Rand as congruous should be regarded with extreme suspicion.

When the statement 'occupy Wall Street' first entered my consciousness, my first thought was an image of a sinking ship, and a bunch of people gathered around the snack bar protesting the prices.

Let me put it this way.

Fuck Oakland, and fuck Wall Street. We need to occupy our own damned government.
Posted by Sean Craven at 8:56 AM 10 comments: