The orange cards in the middle of the heap? Yeah, that's the plot for the second volume -- I've already written three drafts of that, the last readable if unacceptable, and the third volume has had a solid outline for years now. So if there's interest, the rest of the series is ready to roll.  It's been this first one that's been such a bastard...

So, later today I'll be sending out some .doc attachments, including one to the offices of Tor Books.

Ghost Rock is ready to present to the professional world.

Or, to put it another way, it's time for me to crack open the cozy little egg I've been living in for so long.

The last three days have been amazing. I've lived the damned novel. And that's the crucial element. It had to have real life for me. Until I could put my hands on it and feel the muscles jump, it was not ready. I'll do a post on the full history of the project some time next week, probably, but here's my feelings at the moment.

I had no way of knowing if this was ever going to be ready, but here it is. Finally.

I took out pages and pages of waste. I have no idea how much new material I added, but there was quite a bit -- it's gone from 53,000 words to 59,000 words. This is a relief to me -- it's the difference between a tight, disciplined work, and are you sure that isn't a novella?

I am pleased with myself. I am proud. I managed to do what I intended; the question is whether or not people find it pleasing.

And that's kind of up for grabs. It is something, but is it something people like?

It's memoir, or self examination, or therapeutic writing. This deals with everything from mental illness to the mystical experience to art to alienation to...

It's an old-fashioned fairy tale, an action adventure yarn with a pulp feel and pace, a story that ends with a kiss and the promise of true love.

It is a visionary work -- I've explored some exotic states of consciousness and brought the results back for public use.

It is a subtly self-confessing metafiction -- but the character's awareness that they're fictional is handled so as not to destroy the pleasure of the immersive reader.

It is an examination of storytelling and the relationship between literature and life, and the sly academic mind will be able to discern references to works ranging from Beowulf to Gravity's Rainbow to Harry fucking Potter. Each major genre from science fiction to romance takes a turn on stage, while the stage itself is rooted in the literary traditions of the epic, viewed with skepticism.

It is an examination of the real experience of rock and roll -- the experience of listening to music and playing it, not that of drugging and stage diving.

Its most central themes are friendship and principal.

It is an examination of America from a semi-fresh perspective.

It is foam. It is almost not there. There is more negative space than positive shape in this novel -- crucial scenes are left entirely to the reader, hints and details and half-completed sketches are intended to allow the reader a vivid, personal experience -- this book won't read the same twice, because most of it is suggested in ways that demand intuitive elaboration.

It is an action-adventure novel where more words are spent on the consequences of fights than on fights -- our lead character spends a lot of time in emergency rooms or coping with grief.

And if I may be so bold, 59,000 words is short for a novel, but long for a poem. I have knocked my ass out to make sure that there are passages that make this book worth reading purely for the prose. I have tried to take the language of my time and render it in a form that contains lasting beauty.

These are big words, but you know what? I've worked hard. And I have never had this sense of solid, earned pride before. I'll tell you what. I like the damned thing. It's a little embarrassing in parts, there's a quality of naivete that sometimes borders on the juvenile, but that's me all over. I did what I set out to do, I did it with a great deal of technical proficiency, and if nobody else likes it, I will be bothered, but I'll blame their tastes and not the work.

Tell you what, though. I bet nearly a decade of my life that I could write a book that pleased both me and others. A book that would be really read.

This book is the means by which I intend to introduce myself to the world.

I wonder how the world is going to respond. 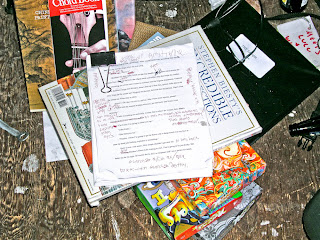 The paper of the manuscript is soft as cloth -- the front and back pages almost drape. I've been sick for weeks. I think it's the manuscript that's doing it to me. I have people waiting for the next Swill, and in theory, I could finish it in four days, give or take. I've been there for weeks. Months, actually. To tell the truth.

I think it's the manuscript that's doing it to me.

Or, rather, it's what the manuscript means.

Working on this novel has shaped my life as much as any other single force in my recent life. I started it  eight? Nine years ago?

I have spent money and shed blood. I've travelled more on my own behalf than I ever have in my life. I've met writers I respect and admire, including one of my Major Personal Writers. You could put together a very convincing anthology using the writers with whom I've consulted. I have made contact with a circle of up-and-coming writers who I greatly enjoy. I have had the kind of experiences that you aren't supposed to have, received very specifically the kind of reception new writers are told not to expect.

The two people closest to me in my life have both responded to reading the novel by growing measurably more respectful and appreciative of me; it is entirely reasonable to say that it's helped bring romance into my life. When I started the book, I had strong, if unstated, convictions that there was something immoral about self-esteem; now I'm attempting to cultivate self-love. This book has taught me about myself.

And it's given me an ulcer, put me in the hospital, got me placed on psychiatric medication. (If you're a 'just take the meds' type, let me tell you -- sometimes the docs have NO FUCKING IDEA what they're doing, and they do it irresponsibly on top of that. Sometimes it works that way.) I've been pushed to my limits in all directions.

It's time to get the fucker done. I'm not going to be able to function freely until it's out of my system. I honestly think Swill will get done faster if I do this first, and that goes for everything else in my life.

You aren't supposed to invest this much in a single work of art, especially one in a dying form going out into a chaotic market. But I needed to write it, and this is what it took.

So I'm going to start the last round of the line edits to day -- input from the manuscript, reading aloud, that stuff. Producing the final copy. I'm still sick, I've got lots of stuff I should be doing, but this is the thing to do now.

And the thing is? It's going to be a delight. I love this fussy part of the work, getting all the little details just so.

And then I'll be able to forget about it and get on with my goddamned life.
Posted by Sean Craven at 8:23 AM No comments: