The Zappa Test And Stream-Of-Consciousness 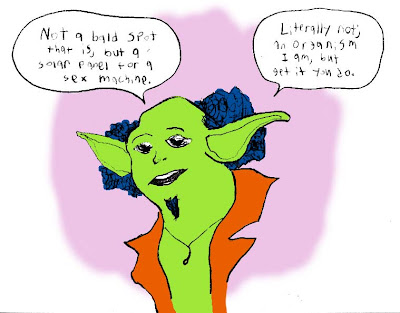 There's never going to be a good excuse for Larry-hair Yoda, so here he is anyway.

The novel is back in play, finally, and the word from some of my long-term readers is that I'm working at my best. The current draft is written at distinctly higher level than any of my previous fiction. Part of my recent non-productivity has actually been due to the mental effort of improving my work. Sometimes you just need to lay around and obsessively dwell on the details. Figuring out how every event in the story fits into the background I've developed took a lot of thought, but I think the end results will pay off.

But the real reasons for the improvement lie in two areas. One is that I finally understand the basic story structure -- it's a pair of intertwined narratives, one dealing with a haunting, the other with quest fantasy in a bizarre otherworld. Each of these forces the protagonist into further contact with the other, until both intersect at the climax.

And once I really understood the shape of the story and the rules and reasons of the fantasy element, all of a sudden it became work to keep a lot of important characters and scenes in the novel.

So I took them out.

I wrote the living hell out of that shit, polished it for years, and as soon as I realized those characters and scenes did not serve the story they started to irritate me. To bore me.

So out they went. Because they failed the Zappa test. If you listen to too much Frank Zappa, you start realizing that his big complaints about the human race is that they waste your time and they fail to convey. I do not want the Vaprous Non-Existent Shade of Zappa making snotty remarks about my work, so that shit had to go.

It's like I cleaned a bunch of barnacles off the hull.

I also made a fairly major discovery. This is one of the big secrets, and frankly someone should have told me about this a long fucking time ago. There's an odd buzz around first-person present-tense. This particular mode is strongly associated with literary fiction, and I've always wondered why.

It's because it's the tense of stream-of-consciousness writing. This is my first extended effort at stream-of-consciousness, and boy, has it been a motherfucker. It turns out that I had been unconsciously engaged in an internal criticism of a certain type of conventional fictional language, and this brought it to the surface.

This is the language that is used by a storyteller addressing an audience. Once upon a time, and then, meanwhile, so they, the end. These are just the tip of the iceberg. My suspicion is that they originate in oral storytelling.

But in a printed narrative, they are either an artfully used affectation or a sort of tic serving no useful function. Instead, they not only waste time, they give the reader a dig in the ribs so they don't forget that this is a story.

When you work in stream-of-consciousness, you are forced to consider every word you put down as a thought. The end result is that the reader is presented with something resembling a found object that must be interpreted. Because of this, conventional narrative language sticks out as artificial and corny. Lame.

That doesn't mean that stream-of-consciousness is closer to reality than a conventionally-told story. Rather, it operates at a more sophisticated level of artifice, and makes a more sophisticated set of demands. Small details become crucial, and a careless or hasty reader will lose out big time.

Why didn't someone tell me about this?
Posted by Sean Craven at 8:54 AM No comments: