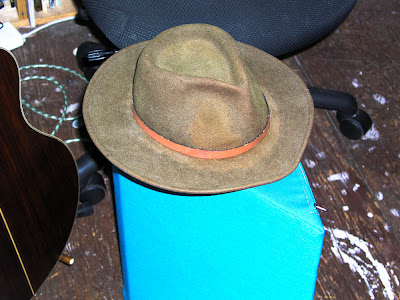 I'm in the process of returning to functionality, or rather the process has hit the point where it's obviously working. Nice to get some results. Here's how it started.

I was walking to go pick up my niece one afternoon. Because I have a shiny bald head and do not drive, I'm a hat person. Purely practical, but I've recently started thinking of them as part of a developing look. Hats are tricky. They're one of those areas of life where the chance of coolness is matched by the risk of dildonics.

Anyway, at the corner a big family was waiting for the bus. Mom and Auntie were talking trash while the kids went nuts, and as I came by, one of the little boys, probably seven or eight, planted himself on the sidewalk in front of me, scowling fiercely, knees bent and arms akimbo. (How often do you get a chance to use that word properly? I think this might be my first.)

I ball up my fists, lift my upper lip so my teeth show and my eyes go away, and shuffle toward him, fast, so he's startled but he doesn't have a chance to move.

He looks up at me and I grin at him, give him a thumbs up, and dodge past him respectfully, step off the sidewalk but give him just a little bit of a messin' shove -- I don't send him sprawling, it's just a hey-buddy.

And as I step past him into the crosswalk, he yelled. "Hey! Did you see that man? I want to go with that man! He had a jungle hat!"

Right then, I remembered being a little kid and getting that feeling of running across an adult and wanting to be part of their lives, or to have something of what they had. And I thought about how the boy oaf would respond to the adult me.

I would have had exactly the same response that kid had. I am in cold fact exactly the kind of person who most thrilled me when I was a child. The problems that have been weighing me down would have seemed both pitiable and romantic, more the latter than the former. They certainly wouldn't have provoked any judgment.

I've known this for a while, but it's hard to really embrace yourself when it's obvious that you're an oddball, and self-acceptance means being a little more of a visible freak.

But my problem currently? What's been screwing me up over the last while? It isn't mental illness, and it isn't chronic pain, and it isn't poverty. What is is, is a lack of mojo. And mojo does not thrive in conditions of self-denial.

I needed my mojo back.

So I took steps. Here, courtesy of Nick Mamatas, is a taste of the results, which are still coming in. Nick's post deals with issues relating to the personal side of professional relationships, and should it ever become widely known, its essential decency will represent a threat to his carefully-maintained reputation as Satan incarnate.

If you're interested, next post will carry a big blast of bragging, and some practical techniques for mojo reacquisition.

That picture up there? That damn well looks like a jungle hat to me.
Posted by Sean Craven at 12:58 PM 3 comments:

Touched By An Imbecile 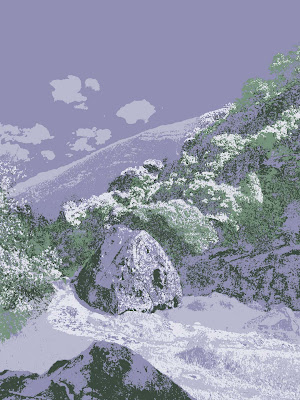 The fun thing about this technique is that it opens up all kinds of color possibilities for the images if I get the chance to do them as large-scale prints.
The missus is visiting her mom, so I decided to take advantage of her absence and indulge myself by pacing through the house in the dark instead of sleeping. (If she was here, she'd make me turn on a light.) Well, I got an idea so brilliant it impressed even me. I swear to God, I'll be able to retire on this one.

I want to do a TV show called Touched By An Imbecile. You'd get a group of regular old idiots -- you know, like the kind at work, or the ones who have a hard time telling you where the C-clamps are? No one so slow that you'd feel bad about making fun of them, but none of them so smart that it's a good idea to let them drive and vote and stuff. The kind of people who 'feel truth in their heart.'

So we'd give them a van, and have them go around the country and show intelligent, well-educated people that their so-called 'smartness' is just something they put on to avoid facing their basic humanity, and that all it does is keep them from seeing the magic in life. Fun and hijinx will naturally ensue.

Then at the end of the season, the van, with the cast in it, will be driven into a crusher. People will be able to bid on-line for the right to trigger the crushing mechanism a little at a time, and they will be given the option of having their name and image flashed to the people inside the van so they know who's killing them.

Most smart people don't have a lot of money, but if we do this we'll get pretty much all of it.
Posted by Sean Craven at 11:35 PM 2 comments: