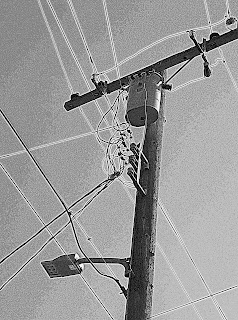 The sky is bothering me on this one. I can't tell whether to keep it, replace it with a flat gray, or use a smooth gradient. I hate it when a creative problem boils down to, "Try and be less tacky."

So it's time for the blog to come back. While I used it primarily as an outlet for casual writing, its real worth to me has been therapeutic -- for instance, when I'm going through a crisis period, it can be useful to see if I was going through a similar crisis around the same date in previous years.

And I'm going through a crisis right now, and it might be good for me to write about it.

A while back -- and if I'd kept up on my blog, I'd be able to put a date to it -- it became clear that drinking was becoming a problem in my life, so I made the transition from drunk to alcoholic. By which I mean I started going to meetings. Not AA, it's a secular group called Lifering. And since then, I've mostly stopped drinking.

But I've gotten drunk twice in the last three days. Once I could call a slip, but twice so close together is obviously an act of self destruction. I'd like to publicly apologize to the missus. She puts up with a lot from me, and I genuinely regret that she has to be around me when I'm wresttling with my demons.

And that is what I am facing right now. My deepest and most abiding problems have been forced out of hiding, and when exposed to the light, they seem obvious to the point of cliche. I drink when in crisis because that is how all the adults in my life coped when I was a child, and I am self-destructive because people told me I was bad. Given the history of mental illness in my heritage, I'd be a little screwy no matter what, but what I'm dealing with right now actually is that simple.

Right now, my life is really good. And that is why I am not in a position to ignore my issues anymore. I do not have the option of blaming the world at this point. There have been times when I have suffered real misfortunes, but that isn't going on right now.

So the fact that I have been dealing with one of the bleakest periods of extended depression in my life is something I have to really own. As I told my shrink, "It used to be that when I fell off the tightrope, I went down into the dirt and was mangled and I had to heal up before I could get back on the rope. Then in my mid-twenties I was able to get a safety net put in. And once I started getting some recognition as an artist, it was like getting a safety tether. Now when I fall, I only drop about six feet and I can climb right back up. The thing is, for the first time I can actually see the drop and it's intimidating the fuck out of me."

I am looking square at the fact that on a certain level I do not believe I have the right to be alive, that I see my existence as an objectively bad thing. (The ability to maintain that belief is definively subjective. I KNOW.) What makes this fun to contemplate is that one of the main roots of this attitude is a response to the reaction of the adults in my life to my childhood depression.

We had a friend named Aggie who was very fond of telling this joke when I was in earshot. "If you took Duncan (my brother, deceased) and put him into a barn filled with horseshit, you'd come back six hours later and he'd be digging away, saying, 'There's got to be a pony in here somewhere!' And if you put Sean in a room full of presents, you'd come back six hours later and he'd be sitting in the middle of the floor crying, and if you asked him why he'd say, 'if I open one of these presents I'll break it and then I'll be in trouble.'"

See the cat? See the cradle?

When I was a kid, I wished more than anything else that I lived in Berkeley, that I had a cute chubby girlfriend, that I was big and tough and smart and talented and nice, that I was good at stuff, that people liked me, and so on and so forth and I've got everything I wanted as a child at this point. I really do. While I am always on the lookout for more compliments and attention, I've actually gotten enough of both to last me the rest of my life if I use them conservatively. I have heard everything I want to hear said about myself by exactly the right person.

And part of me does not want to be happy because I do not deserve it.

Because my mom was a narcissist, so I was the best thing in the world when I was performing and the worst when I was not. Because the crucial time when there actually was contempt and hatred for white men in popular culture coincided with a key developmental phase, and I lived in a predominantly black community at that time. (Honestly, my mental image of 'regular regular' has black hair and brown skin.) Because neither my mother or my grandmother actually liked men, and my maturation was a source of real and visible pain to both of them. Because even if I hadn't been picked on for being white, being smart, weird, and awkward would have been enough to get the job done. It is not complicated. Well, it is, but it isn't hard to understand.

So right now, my next step is to let go of or ameliorate my need for self-destruction. It is an immediate and pressing problem for me and unfortunately the people in my life. I am not acting out as badly as I have in the past, but better is still not good enough.

Here is the knot.

And I don't deserve to feel better. I do not trust good feelings.

But this is not an insoluble problem. That's why I get free therapy -- I do get better, and for a shrink, it's fun to watch. Right now all I need to do is work, relax, and enjoy my life. That's it. I have a good relationship, a place to live, I get to cook with great food, my job at this point embarasses me because it feels so recreational, and I get to be this... well, whatever the hell it is I am, it's pretty damned dramatic. I have actually bitched about performing for polite audiences. Do you know how lucky you have to be when that is one of your complaints?

That all this is screwing up my self-image as a pathetic loner destined to die in the gutter.

My current period of depression actually is on the wane. This is a physical thing as much as mental (although the function of the mind seems pretty damned physical to me), but the initial triggers were the completion of my second novel followed within a week by the death of my mother-in-law, Ruth Leaf, for whom it was written and who never got to read it. And Robin Williams' death really got to me. I've never been that much of a fan, because frankly when he was being Robin Williams, he scared the crap out of me. There is a symptom of mental illness called 'compulsive witticism,' and I've got it. I'm not complaining, because I've gotten money for funny, but watching Williams perform gave me the same sick, guilty feeling I got from listening to too much Wesley Willis -- I felt complicit in the exploitation of mental illness.

But it turned out I know a lot of people who knew him personally, and their sorrow gave his death a weight for me that it wouldn't otherwise have had.

It was the actual death, the mechanics of it, that got to me.  I found myself mentally reconstructing his last moments compulsively. Was it auto-erotic asphyxiation? Was the knife on the floor a sign that he'd been trying to cut himself loose?

That was the one that got to me. The idea that he'd started to kill himself, then changed his mind and died anyway? It makes me sick to think of it even now.

And again, I can't look away from my own situation. When I talk about it to people, I say that I was suicidal in my teens and early twenties. But when I say I'm not suicidal now, I mean by my standards. I think about my death a lot, and take comfort in it. I think I should not exist. For me to say I'm not suicidal is a semantic game. I am out of the danger zone. I am not going to kill myself. I'm not even going to hurt myself. So calm down. But I can't afford to keep pretending that I don't have these feelings.

So what pushed me into my immediate, current crisis? Getting a dream job (adventure novelist, and yes, I bitch about that too), and having the missus take over some responsibilities that were screwing me up.

But these are the tip of a general feeling that my life is changing for the better, that I'm going to move on to the next big stage in my life. As I said, right now my big job is just enjoying my daily life and not screwing anything up. And I'm trying to screw things up.

So that's why I'm blogging again. I need an extra therapeutic edge.

Additionally, I've been having a lot of my Facebook posts vanish, and I never think to use Twitter these days, and you know what? My casual writing has gotten pretty decent, and I'm thinking about doing it all here on the blog, then distributing choice nuggets to other social networks. Something to consider...