On Reading My Novel For The First Time 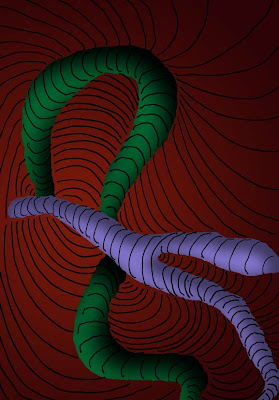 Behold! The miracle of lack of inspiration, followed by a quick 'Fill up the damned page, already.' Color helps...
Well, it's been a while since I posted. Not to go into it but it's starting to seem as if you can track my manic and depressive states by observing the frequency with which I blog...

I finally heard back from another reader on the novel. She was quite enthusiastic. It was really encouraging -- it seemed as though what I was trying for was coming through. Among other things, I'm deliberately attempting to write a very masculine work that doesn't crap on women -- one of the central themes is that of masculine identity in a post-feminist society. She said she thought of it as a feminist novel. I very consciously visualized the scenes as I wrote. I could have storyboarded them. She told me that she could see the scenes as she read. Cool! It went on like that for some time. Frankly, I ate it up with a spoon. I'm developing an unseemly fondness for praise.

Her criticisms were quite useful -- the main one was something I'd been planning to do (compress chapters two and three into one chapter and dump most of the characters introduced there) and the other was something I'd set up to do and then forgotten about (make the events of the story dovetail with the desires of the lead character). She also gave me some sparse but very good line edits.

So I read the thing myself. It was the first time I'd sat down and gone through the current version. I have more work to do than I thought -- two of the main characters are a lot less sympathetic than I intended, among other things. But it's a pretty decent read.

This is going to sound like rampant egotism, but I was really disappointed. It was very good -- a solid, fast-paced adventure story. It was well-written. It had some thematic depth. Some real invention. I honestly think it's better than most genre fiction.

But it wasn't great.

That's just pathetic -- finding myself tore up because I haven't written a classic work of literature. Well, that isn't really what I was aiming for -- but I want to produce something that will be a (god help me) minor classic in its own little niche. A great fantasy that has some real resonance. But there we go. We dream in fire and work in clay...

On the other hand, this is just the first volume and while it's a satisfying read on its own, it is just the introduction to the situation. It will get deeper as it goes along. Most of what I'm trying for comes later -- I'm gonna try and tear the reader's heart out in volume two and nurse them back to life in volume three.