My Internet Is Down

My internet, cable, phone, etc. is down.

I have no cell phone.

The missus is in Florida.

None of my regular support team is pulling their usual hours, due to the holidays.

I will live, but I am contemplating the brute fact of December, and that I have never heard the phrase, "Warm and lonely."

That will be all. 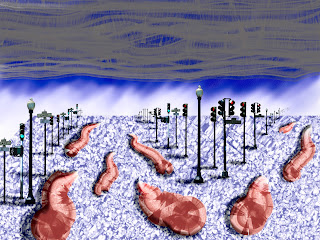 By Sean Craven
For Rob Pierce

Let me tell you how it started. God created the Eden, and it was nice – kind of seventies style, lots of orange vinyl and amber plastic panels. And then God created His first customer, Adam.

God pulled at His beard, and said. “An appletini? You sure?” God said it in a way that made Adam feel as if he’d been called a dirty name.

God pulled the beer and poured the shot while Adam stretched and rubbed his eyes and shook his head, and that’s how Adam missed the part where God put an eyedropper full of something extra in the shot.

A few hours later, Adam woke up in a tub full of ice water in a hotel room; his side hurt like hell and there was a glimmering centipede of surgical staples running across the base of his ribcage. And at the bottom of his torso, where previously he’d seen only the plaid lap of his pants, there was a snake.

“Let’s get out of here, man,” the snake said, so Adam got dressed, opened the door to the empty hallway, went looking for an elevator and eventually found his way back to the Eden. God was still behind the bar, and there was someone else, sitting in one of the booths.

Her pantsuit was a bright, solid purple, and looked as though she’d been screwed into it by a third party. The blonde curls of her hair were a lopsided mass of confusion, and her pale, loose-fleshed face looked stunned. The jacket of her pantsuit and the position of her arms on the bar made it impossible to guess at the conformation of her breasts, but her hips and behind settled onto the padded bench, slack mass too broad to sit comfortably on a stool. The drink in front of her was blue and had dry-ice fog boiling out of it; the process of creation had advanced while Adam had been gone. The drink made Adam think of the appletine he’d tried to order earlier, and now he understood what God had been implying. This was the dirty name God had called him.

That fucker, Adam thought to himself.

“Well, well, well,” the snake said, and Adam’s incision felt as though someone had twisted it. He put his hand to his side, and walked to the bar. “Hey,” the snake said, and through some horrid trick, he spoke with Adam’s voice, and used a motion of Adam’s head to catch God’s eye. This had never happened before, but many children of Adam have since felt the snake speak through their mouths at one time or another. When God came over, wiping His hands on a bar towel, the snake said, “So, uh, is…”

The snake shook Adam’s head, and said “I’ll have what she’s having,” and when God gave Adam a look the snake looked right back at him, then turned and walked over to Eve’s booth. “Hey,” the snake said.

Hey, Adam thought, but it didn’t come out of his mouth. He was addressing the snake, but the snake ignored him.

Eve looked up, blinking, and pulled back. She pulled a strand of hair from where it was stuck against her mouth, a red mark against the pale yellow. “Excuse me?” Eve said.

“I haven’t seen you around,” the snake said with Adam’s mouth. “You’re new here, right?”

Hey, Adam said, but nobody cared except God, who thought, Oh, for Christ’s sake.

“I don’t think I know you,” Eve said, and the snake slid Adam’s butt onto the bench opposite Eve.

Adam was starting to get mad at her. She wasn’t that good-looking anyway. Adam didn’t know what was going through the snake’s head, and he didn’t want to find out.

“I’m sorry,” the snake said, and used the same little head motions he’d used on God until Eve looked at Adam’s face. “I was hoping you could use some company. There’s not a lot going on. But if I’m bugging you…”

Eve straightened her jacket. For a second, the snake was distracted – Eve’s breasts were small, but they were nicely rounded, cute little hemispheres – and Adam started go get up from the table.

“Don’t go,” Eve said, and the snake settled Adam back into place. Eve looked right at Adam’s face while she talked to the snake. “I think you were right. Maybe I could use a little company.”

That was when God came up with Adam’s drink, blue and fuming. “Here you go,” God said. “Sir.”

The sneer didn’t make any difference to the snake, but it hurt Adam’s pride. Nobody was on Adam’s side.

When God went back behind the bar, He didn’t know whether to laugh or cry. My image and likeness, He thought, and popped His towel. My image and likeness. Trying to kill time, He picked over the drink garnishes, the little onions and maraschino cherries, wondering what it would be like to have so many people in the world that every onion might be put into a Gibson.

God shuddered. All the sticky little fingers. Maybe it wasn’t too early for a drink.

“Hey,” the snake shouted with Adam’s mouth, and God flinched.

God turned and walked to the booth. “Yes?” God said, and leaned over the table while revealing His teeth. “You need something?”

When Adam saw the look on God’s face, he was angry and hurt and he wanted more than anything else to tell God that he was only drinking this stuff for the opposite reason of being a woman, except that it was the snake drinking, not him. Adam’s brain was squirming like a mass of snakes, and Eve didn’t care about that at all. Nobody cared about Adam.

As God walked away, the snake turned back to Eve.

“Hey,” God said, and set a tray down on the table, and placed the green triangles of their appletinis in front of Adam and Eve and the snake. “Listen, I think you two have had plenty. This is your last, okay?”

After wandering around for a while, Adam and Eve settled down at a bus stop to wait for their real lives to begin. Eve twisted the fabric of her pants, marveling at the purple. “What was I thinking?” Eve asked.

“What?” Adam asked, and looked up, startled. What was he supposed to do with this woman?

Adam kept his mouth shut. Where was the snake? He was supposed to deal with this stuff. Eve looked at Adam. “Those pants are horrible. Those pants are the worst thing in the world. They’re made out of ugly,” Eve said.

“What’s wrong with plaid?” Adam asked. Eve thought, oh, for Christ’s sake, but as Adam spoke, the sour taste of an appletini belch crept into his mouth from the back of his tongue, and he knew –

he knew what was wrong with plaid.

And back behind the bar at the Eden, God put his towel down, got out a glass, and poured Himself a drink. And I don’t know what He had, but if you find out, tell me, and I’ll buy a bottle and drink your health.
Posted by Sean Craven at 9:08 AM 3 comments: